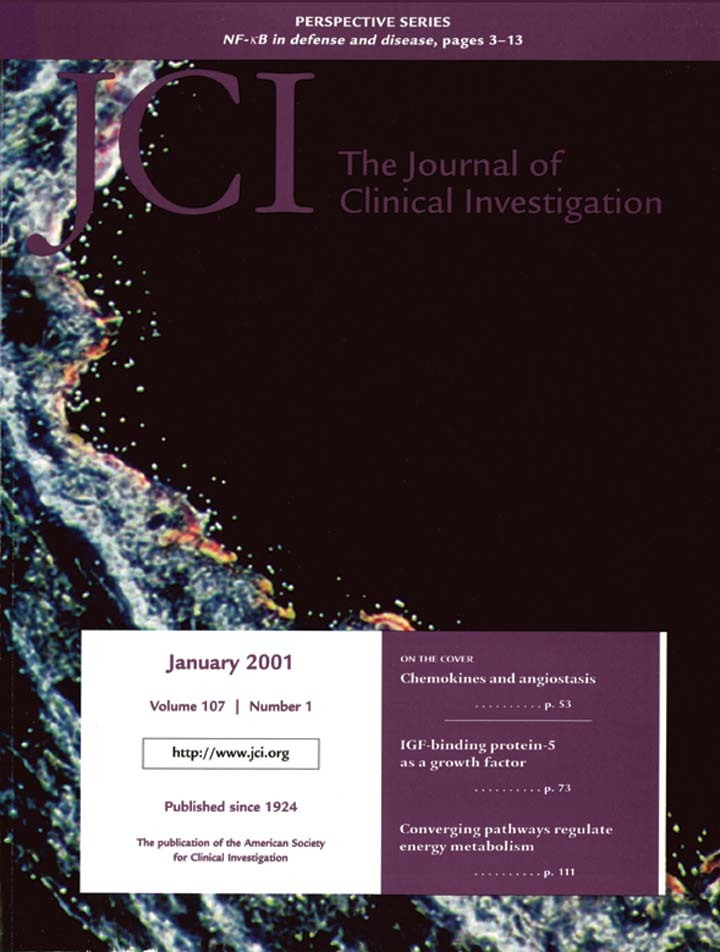 Endothelium-derived free radicals: for worse and for better

Endothelium-derived free radicals: for worse and for better

Petulant cellular acts: destroying the ECM rather than creating it

Petulant cellular acts: destroying the ECM rather than creating it

The tolerant recipient: looking great in someone else’s genes

The tolerant recipient: looking great in someone else’s genes

It has been suggested that increased collagenase-3 (MMP-13) activity plays a pivotal role in the pathogenesis of osteoarthritis (OA). We have used tetracycline-regulated transcription in conjunction with a cartilage-specific promoter to target a constitutively active human MMP-13 to the hyaline cartilages and joints of transgenic mice. Postnatal expression of this transgene resulted in pathological changes in articular cartilage of the mouse joints similar to those observed in human OA. These included characteristic erosion of the articular cartilage associated with loss of proteoglycan and excessive cleavage of type II collagen by collagenase, as well as synovial hyperplasia. These results demonstrate that excessive MMP-13 activity can result in articular cartilage degradation and joint pathology of the kind observed in OA, suggesting that excessive activity of this proteinase can lead to this disease.

Angiogenesis is critical for the growth and proliferation of tumors as well as for normal development. We now describe a novel role for histidine-rich glycoprotein (HRGP) in the modulation of angiogenesis. HRGP is a plasma protein that circulates in relatively high concentrations (1.5 μM), but has no known function in vivo. We have shown previously that HRGP binds with high affinity to thrombospondin-1 (TSP-1), a homotrimeric glycoprotein that is a potent inhibitor of angiogenesis. The antiangiogenic activity of TSP-1 is mediated by the binding of properdin-like type I repeats to the receptor CD36. We found that binding of HRGP to TSP-1 was similarly mediated by TSP type I repeats. HRGP colocalized with TSP-1 in the stroma of human breast cancer specimens, and this interaction masked the antiangiogenic epitope of TSP-1. In assays performed in vitro of endothelial cell migration and tube formation, and in vivo corneal angiogenesis assays, HRGP inhibited the antiangiogenic effect of TSP-1. These studies suggest that HRGP can modulate the antiangiogenic activity of TSP-1, and identify a potential mechanism of resistance to the antiangiogenic effect of TSP-1.

Endothelial cell receptors for the angiostatic chemokines IFN-γ–inducible protein of 10 kDa (IP-10) and monokine induced by IFN-γ (Mig) have not yet been identified, and the mechanisms responsible for the effects of these chemokines on angiogenesis are still unclear. IP-10 and Mig share a common functional receptor on activated T lymphocytes, named CXC chemokine receptor 3 (CXCR3). Using in situ hybridization and immunohistochemistry, we show that CXCR3 is expressed by a small percentage of microvascular endothelial cells in several human normal and pathological tissues. Primary cultures of human microvascular endothelial cells (HMVECs) likewise express CXCR3, although this expression is limited to the S/G2-M phase of their cell cycle. Both IP-10 and Mig, as well as the IFN-γ–inducible T-cell α chemoattractant (I-TAC), which all share high-affinity binding for CXCR3, block HMVEC proliferation in vitro, an effect that can be inhibited by an anti-CXCR3 antibody. These data provide definitive evidence of CXCR3 expression by HMVEC and open new avenues for therapeutic interventions in all conditions in which an angiostatic effect may be beneficial.

Donor/recipient MHC class II matching permits survival of experimental allografts without permanent immunosuppression, but is not clinically applicable due to the extensive polymorphism of this locus. As an alternative, we have tested a gene therapy approach in a preclinical animal model to determine whether expression of allogeneic class II transgenes (Tg’s) in recipient bone marrow cells would allow survival of subsequent Tg-matched renal allografts. Somatic matching between donor kidney class II and the recipient Tg’s, in combination with a short treatment of cyclosporine A, prolonged graft survival with DR and promoted tolerance with DQ. Class II Tg expression in the lymphoid lineage and the graft itself were sequentially implicated in this tolerance induction. These results demonstrate the potential of MHC class II gene transfer to permit tolerance to solid organ allografts.

Recent studies support the concept that IGF-binding protein-5 (IGFBP-5) stimulates bone formation, at least in part, via IGF-independent mechanisms. To evaluate this hypothesis further, we evaluated in vitro and in vivo effects of IGFBP-5 on bone formation parameters using the IGF-I knockout (KO) mouse. Treatment of serum-free cultures of osteoblast clones derived from IGF-I KO mice with recombinant human IGFBP-5 increased both proliferation and alkaline phosphatase (ALP) activity in a dose-dependent manner, an effect comparable to that seen with IGF-I. IGF-II levels from media conditioned by osteoblasts derived from IGF-I KO mouse were below those detectable by RIA. To eliminate possible actions of IGF-II, if any was produced by osteoblasts derived from IGF-I knockout mice, the IGFBP-5 effect was studied in the presence of exogenously added IGFBP-4, a potent inhibitor of IGF-II actions in bone cells. Addition of IGFBP-4 blocked IGF-I– but not IGFBP-5–induced cell proliferation in osteoblasts derived from IGF-I knockout mice. Consistent with in vitro results, a single local injection of IGFBP-5 to the outer periosteum of the parietal bone of IGF-I KO mice increased ALP activity and osteocalcin levels of calvarial bone extracts. The magnitudes of IGFBP-5–induced increases in ALP and osteocalcin in parietal bone extracts of IGF-I KO mice were comparable to those seen in C3H mice. In contrast to IGFBP-5, local administration of IGFBP-4 had no significant effect on bone formation in C3H and IGF-I KO mice. These results provide the first direct evidence to our knowledge that IGFBP-5 functions as a growth factor that stimulates its actions in part via an IGF-independent mechanism.

An etiological role for aeroallergens and eosinophils in experimental esophagitis

An etiological role for aeroallergens and eosinophils in experimental esophagitis

Eosinophil infiltration into the esophagus is observed in diverse diseases including gastroesophageal reflux and allergic gastroenteritis, but the processes involved are largely unknown. We now report an original model of experimental esophagitis induced by exposure of mice to respiratory allergen. Allergen-challenged mice develop marked levels of esophageal eosinophils, free eosinophil granules, and epithelial cell hyperplasia, features that mimic the human disorders. Interestingly, exposure of mice to oral or intragastric allergen does not promote eosinophilic esophagitis, indicating that hypersensitivity in the esophagus occurs with simultaneous development of pulmonary inflammation. Furthermore, in the absence of eotaxin, eosinophil recruitment is attenuated, whereas in the absence of IL-5, eosinophil accumulation and epithelial hyperplasia are ablated. These results establish a pathophysiological connection between allergic hypersensitivity responses in the lung and esophagus and demonstrate an etiologic role for inhaled allergens and eosinophils in gastrointestinal inflammation.

Starvation causes a rapid reduction in thyroid hormone levels in rodents. This adaptive response is caused by a reduction in thyrotropin-releasing hormone (TRH) expression that can be reversed by the administration of leptin. Here we examined hypothalamic signaling pathways engaged by leptin to upregulate TRH gene expression. As assessed by leptin-induced expression of suppressor of cytokine signaling–3 (SOCS-3) in fasted rats, TRH neurons in the paraventricular nucleus are activated directly by leptin. To a greater degree, they also contain melanocortin-4 receptors (MC4Rs), implying that leptin can act directly or indirectly by increasing the production of the MC4R ligand, α-melanocyte stimulating hormone (α-MSH), to regulate TRH expression. We further demonstrate that both pathways converge on the TRH promoter. The melanocortin system activates the TRH promoter through the phosphorylation and DNA binding of the cAMP response element binding protein (CREB), and leptin signaling directly regulates the TRH promoter through the phosphorylation of signal transducer and activator of transcription 3 (Stat3). Indeed, a novel Stat-response element in the TRH promoter is necessary for leptin’s effect. Thus, the TRH promoter is an ideal target for further characterizing the integration of transcriptional pathways through which leptin acts.

The Epstein-Barr virus (EBV) nuclear antigen-1 (EBNA1) maintains the viral episome in all host cells infected with EBV. Recently, EBNA1 was found to be the main EBV latency antigen for CD4+ T cells and could be recognized in cultures from all donors tested. We now identify a polarized Th1 phenotype and obtain evidence for its presence in vivo. When T cells were stimulated with dendritic cells infected with vaccinia vectors expressing EBNA1, 18 of 19 donors secreted IFN-γ, whereas only two of 19 secreted IL-4. Magnetic selection was then used to isolate cells from fresh blood based on EBNA1-induced cytokine production. Specific IFN-γ CD4+ cell lines were established from six of six donors and IL-4 lines from three of six. Only the Th1 lines specifically lysed targets expressing three different sources of EBNA1 protein. When the IgG isotype of EBNA1 plasma Ab’s was tested, most specific Ab’s were IgG1 and of a high titer, confirming a Th1 response to EBNA1 in vivo. Ab’s to other microbial antigens generally were not skewed toward IgG1. Given emerging evidence that Th1 CD4+ T cells have several critical roles in host defense to viral infection and tumors, we propose that EBNA1-specific CD4+ Th1 cells contribute to resistance to EBV and EBV-associated malignancies.