The Epstein-Barr virus (EBV) nuclear antigen-1 (EBNA1) maintains the viral episome in all host cells infected with EBV. Recently, EBNA1 was found to be the main EBV latency antigen for CD4+ T cells and could be recognized in cultures from all donors tested. We now identify a polarized Th1 phenotype and obtain evidence for its presence in vivo. When T cells were stimulated with dendritic cells infected with vaccinia vectors expressing EBNA1, 18 of 19 donors secreted IFN-γ, whereas only two of 19 secreted IL-4. Magnetic selection was then used to isolate cells from fresh blood based on EBNA1-induced cytokine production. Specific IFN-γ CD4+ cell lines were established from six of six donors and IL-4 lines from three of six. Only the Th1 lines specifically lysed targets expressing three different sources of EBNA1 protein. When the IgG isotype of EBNA1 plasma Ab’s was tested, most specific Ab’s were IgG1 and of a high titer, confirming a Th1 response to EBNA1 in vivo. Ab’s to other microbial antigens generally were not skewed toward IgG1. Given emerging evidence that Th1 CD4+ T cells have several critical roles in host defense to viral infection and tumors, we propose that EBNA1-specific CD4+ Th1 cells contribute to resistance to EBV and EBV-associated malignancies. 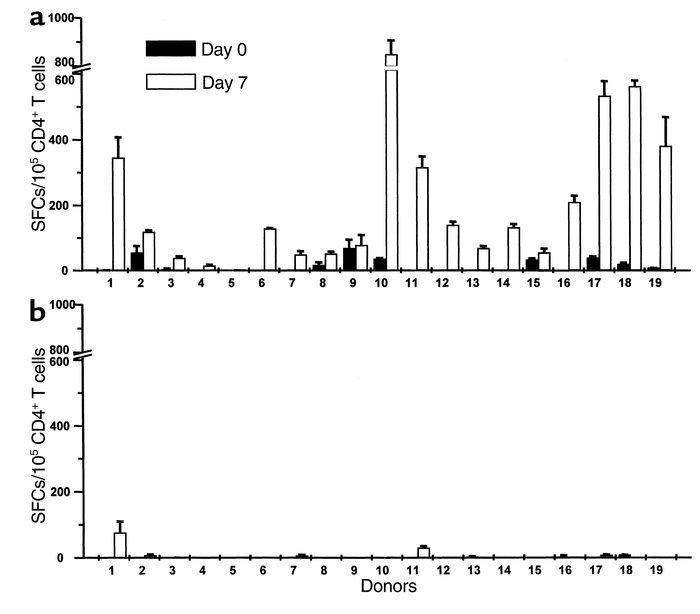 EBNA1-specific T-cell responses are dominated by Th1-cytokine secretion. CD4+ T cells were stimulated with DCs infected with vvEBNA1ΔGA or vvTK– (negative control) and tested for their secretion of IFN-γ () or IL-4 () on the day of T-cell isolation (day 0) and after 1-week expansion (day 7). Values shown are the mean of triplicates and were derived by subtracting the negative control from the number of EBNA1-specific spots. A vvEBNA1ΔGA response was considered significant if it were at least ten spots above the vvTK– control (usually less than 20 spots) and at least twice this negative control. SFCs, spot-forming cells.