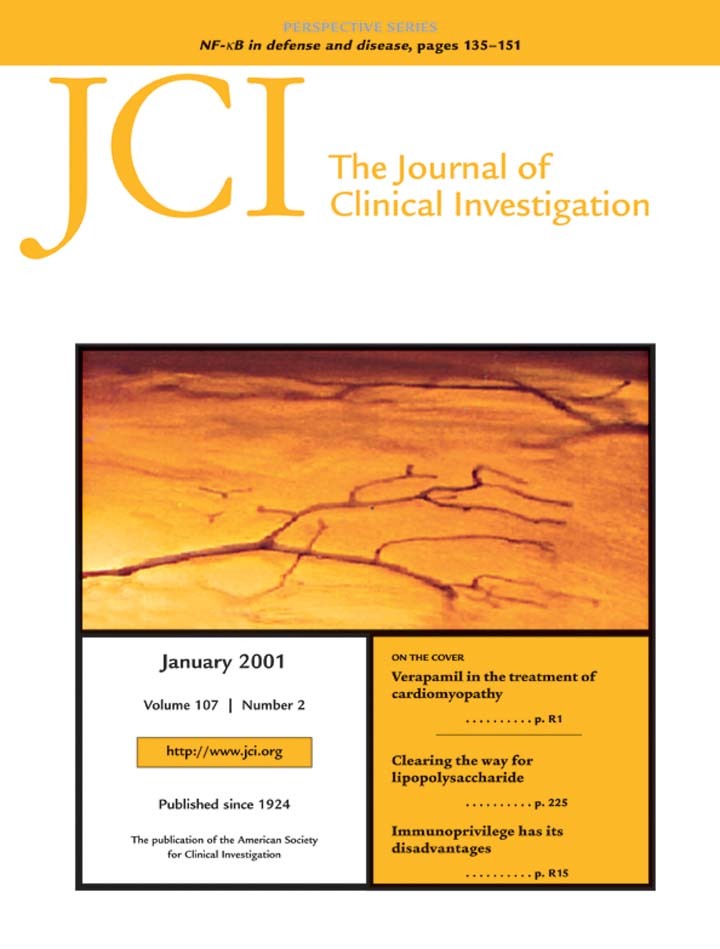 More than the sum of the parts: cooperation between leukocyte adhesion receptors during extravasation

More than the sum of the parts: cooperation between leukocyte adhesion receptors during extravasation

Hypertrophy and hyperfunction of the diabetic kidney

Hypertrophy and hyperfunction of the diabetic kidney

The syndecans make up a family of transmembrane heparan sulfate proteoglycans that act as coreceptors with integrins and growth factor tyrosine kinase receptors. Syndecan-4 is upregulated in skin dermis after wounding, and, in cultured fibroblasts adherent to the ECM protein fibronectin, this proteoglycan signals cooperatively with β1 integrins. In this study, we generated mice in which the syndecan-4 gene was disrupted by homologous recombination in embryonic stem cells to test the hypothesis that syndecan-4 contributes to wound repair. Mice heterozygous or homozygous for the disrupted syndecan-4 gene are viable, fertile, and macroscopically indistinguishable from wild-type littermates. Compared with wild-type littermates, mice heterozygous or homozygous for the disrupted gene have statistically significant delayed healing of skin wounds and impaired angiogenesis in the granulation tissue. These results indicate that syndecan-4 is an important cell-surface receptor in wound healing and angiogenesis and that syndecan-4 is haplo-insufficient in these processes.

IFN-γ action in the media of the great elastic arteries, a novel immunoprivileged site

IFN-γ action in the media of the great elastic arteries, a novel immunoprivileged site

Infection of medial smooth muscle cells with γ-herpesvirus 68 (γHV68) causes severe chronic vasculitis that is restricted to the great elastic arteries. We show here that persistence of disease in the great elastic arteries is (a) due to inefficient clearance of viral infection from this site compared with other organs or other vascular sites, and (b) associated with failure of T cells and macrophages to enter the virus-infected elastic media. These findings demonstrate immunoprivilege of the media of the great elastic arteries. We found that IFN-γ acted on somatic cells during acute infection to prevent the establishment of medial infection and on hematopoietic cells to determine the severity of disease in this site. The immunoprivileged elastic media may provide a site for persistence of pathogens or self antigens leading to chronic vascular disease, a process regulated by IFN-γ actions on both somatic and hematopoietic cells. These concepts have significant implications for understanding immune responses contributing to or controlling chronic inflammatory diseases of the great vessels.

Cardiomyopathy is a multifactorial disease, and the dystrophin-glycoprotein complex has been implicated in the pathogenesis of both hereditary and acquired forms of the disease. Using mouse models of cardiomyopathy made by ablating genes for components of the sarcoglycan complex, we show that long-term treatment with verapamil, a calcium channel blocker with vasodilator properties, can alleviate the severe cardiomyopathic phenotype, restoring normal serum levels for cardiac troponin I and normal cardiac muscle morphology. Interruption of verapamil treatment leads again to vascular dysfunction and acute myocardial necrosis, indicating that predilection for cardiomyopathy is a continuing process. In contrast, verapamil did not prevent cardiac muscle pathology in dystrophin-deficient mdx mice, which neither show a disruption of the sarcoglycan complex in vascular smooth muscle nor vascular dysfunction. Hence, our data strongly suggest that pharmacological intervention with verapamil merits investigation as a potential therapeutic option not only for patients with sarcoglycan mutations, but also for patients with idiopathic cardiomyopathy associated with myocardial ischemia not related to atherosclerotic coronary artery disease.

During atherogenesis, circulating macrophages migrate into the subendothelial space, internalize cholesterol-rich lipoproteins, and become foam cells by progressively accumulating cholesterol esters. The inhibition of macrophage acyl coenzyme A:cholesterol acyltransferase (ACAT), which catalyzes the formation of cholesterol esters, has been proposed as a strategy to reduce foam cell formation and to treat atherosclerosis. We show here, however, that hypercholesterolemic LDL receptor–deficient (LDLR–/–) mice reconstituted with ACAT1-deficient macrophages unexpectedly develop larger atherosclerotic lesions than control LDLR–/– mice. The ACAT1-deficient lesions have reduced macrophage immunostaining and more free cholesterol than control lesions. Our findings suggest that selective inhibition of ACAT1 in lesion macrophages in the setting of hyperlipidemia can lead to the accumulation of free cholesterol in the artery wall, and that this promotes, rather than inhibits, lesion development.

The 9–23 amino acid region of the insulin B chain (B(9-23)) is a dominant epitope recognized by pathogenic T lymphocytes in nonobese diabetic mice, the animal model for type 1 diabetes. We describe herein similar B(9-23)-specific T-cell responses in peripheral lymphocytes obtained from patients with recent-onset type 1 diabetes and from prediabetic subjects at high risk for disease. Short-term T-cell lines generated from patient peripheral lymphocytes showed significant proliferative responses to B(9-23), whereas lymphocytes isolated from HLA and/or age-matched nondiabetic normal controls were unresponsive. Antibody-mediated blockade demonstrated that the response was HLA class II restricted. Use of the highly sensitive cytokine-detection ELISPOT assay revealed that these B(9-23)-specific cells were present in freshly isolated lymphocytes from only the type 1 diabetics and prediabetics and produced the proinflammatory cytokine IFN-γ. This study is, to our knowledge, the first demonstration of a cellular response to the B(9-23) insulin epitope in human type 1 diabetes and suggests that the mouse and human diseases have strikingly similar autoantigenic targets, a feature that should facilitate development of antigen-based therapeutics.

Defective cardiac muscle relaxation plays a causal role in heart failure. Shown here is the new in vivo application of parvalbumin, a calcium-binding protein that facilitates ultrafast relaxation of specialized skeletal muscles. Parvalbumin is not naturally expressed in the heart. We show that parvalbumin gene transfer to the heart in vivo produces levels of parvalbumin characteristic of fast skeletal muscles, causes a physiologically relevant acceleration of heart relaxation performance in normal hearts, and enhances relaxation performance in an animal model of slowed cardiac muscle relaxation. Parvalbumin may offer the unique potential to correct defective relaxation in energetically compromised failing hearts because the relaxation-enhancement effect of parvalbumin arises from an ATP-independent mechanism. Additionally, parvalbumin gene transfer may provide a new therapeutic approach to correct cellular disturbances in calcium signaling pathways that cause abnormal growth or damage in the heart or other organs.

Increasing use of purified or cultured human hematopoietic cells as transplants has revealed an urgent need for better methods to predict the speed and durability of their engraftment potential. We now show that NOD/SCID-β2 microglobulin–null (NOD/SCID-β2m–/–) mice are sequentially engrafted by two distinct and previously unrecognized populations of transplantable human short-term repopulating hematopoietic cells (STRCs), neither of which efficiently engraft NOD/SCID mice. One is predominantly CD34+CD38+ and is myeloid-restricted; the other is predominantly CD34+CD38– and has broader lymphomyeloid differentiation potential. In contrast, the long-term repopulating human cells that generate lymphoid and myeloid progeny in NOD/SCID mice engraft and self-renew in NOD/SCID-β2m–/– mice equally efficiently. In short-term expansion cultures of adult bone marrow cells, myeloid-restricted STRCs were preferentially amplified (greater than tenfold) and, interestingly, both types of STRC were found to be selectively elevated in mobilized peripheral blood harvests. These results suggest an enhanced sensitivity of STRCs to natural killer cell–mediated rejection. They also provide new in vivo assays for different types of human STRC that may help to predict the engraftment potential of clinical transplants and facilitate future investigation of early stages of human hematopoietic stem cell differentiation.

There is considerable confusion concerning the mechanism of lymphocyte death during HIV infection. During the course of HIV infection, M-tropic viruses (R5) that use CCR5 chemokine coreceptors frequently evolve to T-tropic viruses (X4) that use CXCR4 receptors. In this study we show that activation of the CD4 or CCR5 receptor by R5 HIVenv causes a caspase 8–dependent death of both uninfected and infected CD4 T cells. In contrast, CXCR4 activation by X4 HIVenv induces a caspase-independent death of both uninfected CD4 and CD8 T cells and infected CD4 cells. These results suggest that activation of the chemokine receptor by HIVenv determines the mechanism of death for both infected and uninfected T lymphocytes.