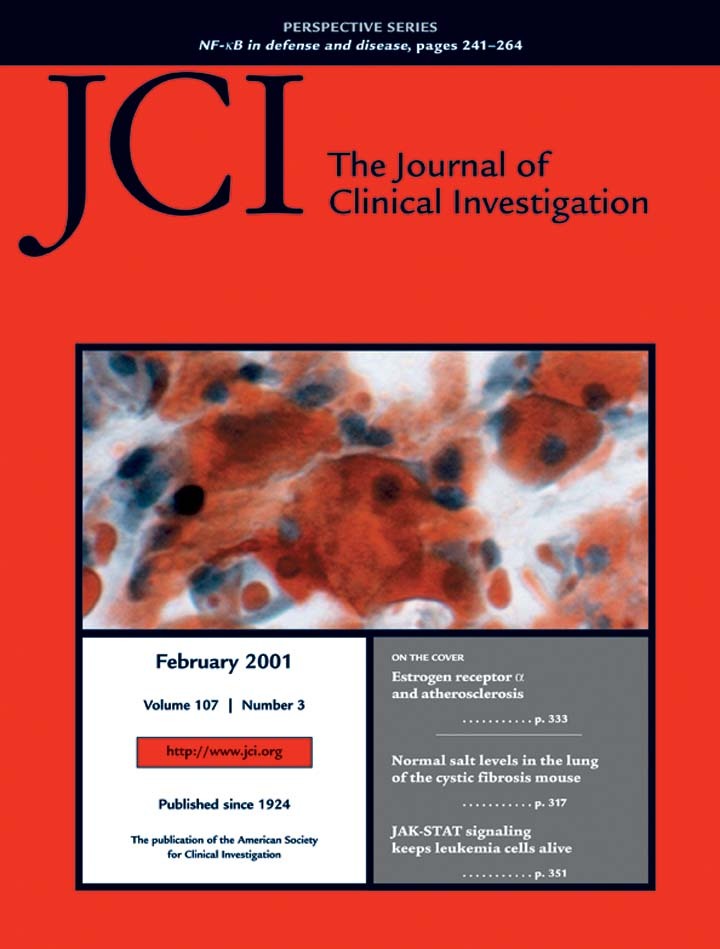 Mother-to-infant transmission of HIV-1: the placenta fights back

Mother-to-infant transmission of HIV-1: the placenta fights back

Local and systemic control of the osteoblast

Local and systemic control of the osteoblast

HIV versus the immune system: another apparent victory for the virus

HIV versus the immune system: another apparent victory for the virus

Parathyroid hormone (PTH), an important regulator of calcium homeostasis, targets most of its complex actions in bone to cells of the osteoblast lineage. Furthermore, PTH is known to stimulate osteoclastogenesis indirectly through activation of osteoblastic cells. To assess the role of the PTH/PTH-related protein receptor (PPR) in mediating the diverse actions of PTH on bone in vivo, we generated mice that express, in cells of the osteoblastic lineage, one of the constitutively active receptors described in Jansen’s metaphyseal chondrodysplasia. In these transgenic mice, osteoblastic function was increased in the trabecular and endosteal compartments, whereas it was decreased in the periosteum. In trabecular bone of the transgenic mice, there was an increase in osteoblast precursors, as well as in mature osteoblasts. Osteoblastic expression of the constitutively active PPR induced a dramatic increase in osteoclast number in both trabecular and compact bone in transgenic animals. The net effect of these actions was a substantial increase in trabecular bone volume and a decrease in cortical bone thickness of the long bones. These findings, for the first time to our knowledge, identify the PPR as a crucial mediator of both bone-forming and bone-resorbing actions of PTH, and they underline the complexity and heterogeneity of the osteoblast population and/or their regulatory microenvironment.

The placenta may play a critical role in inhibiting vertical transmission of HIV-1. Here we demonstrate that leukemia inhibitory factor (LIF) is a potent endogenous HIV-1–suppressive factor produced locally in placentae. In vitro, LIF exerted a potent, gp130-LIFRβ–dependent, HIV coreceptor–independent inhibition of HIV-1 replication with IC50 values between 0.1 pg/ml and 0.7 pg/ml, depending on the HIV-1 isolate. LIF also inhibited HIV-1 in placenta and thymus tissues grown in ex vivo organ culture. The level of LIF mRNA and the incidence of LIF protein–expressing cells were significantly greater in placentae from HIV-1–infected women who did not transmit HIV-1 to their fetuses compared with women who transmitted the infection, but they were not significantly different from placentae of uninfected mothers. These findings demonstrate a novel pathway for endogenous HIV suppression that may prove to be an effective immune therapy for HIV infection.

B-cell accumulation and formation of ectopic germinal centers are characteristic changes in the diseased joints of patients with rheumatoid arthritis (RA). Earlier studies suggested that interactions between B lymphocytes and specialized synovial “nurse-like” cells peculiar to the RA synovium may be responsible for the homing and sustained survival of B cells in the synovium. However, in this study, we found that B cells spontaneously migrate beneath ordinary fibroblast-like synoviocytes (FLSs) and then experience prolonged survival. FLSs isolated from joints of patients with osteoarthritis also supported this activity, termed B-cell pseudoemperipolesis. We found that FLSs constitutively expressed the chemokine stromal cell–derived factor-1 (SDF-1), and that pertussis toxin or antibodies to the SDF-1 receptor (CXCR4) could inhibit B-cell pseudoemperipolesis. However, expression of SDF-1 is not sufficient, as dermal fibroblasts also expressed this chemokine but were unable to support B-cell pseudoemperipolesis unless previously stimulated with IL-4 to express CD106 (VCAM-1), a ligand for the α4β1 integrin, very-late-antigen-4 (VLA-4 or CD49d). Furthermore, mAb’s specific for CD49d and CD106, or the synthetic CS1 fibronectin peptide, could inhibit B-cell pseudoemperipolesis. We conclude that ordinary FLSs can support B-cell pseudoemperipolesis via a mechanism dependent upon fibroblast expression of SDF-1 and CD106.

The lipid mediator prostaglandin E2 (PGE2) has diverse biological activity in a variety of tissues. Four different receptor subtypes (EP1–4) mediate these wide-ranging effects. The EP-receptor subtypes differ in tissue distribution, ligand-binding affinity, and coupling to intracellular signaling pathways. To identify the physiological roles for one of these receptors, the EP1 receptor, we generated EP1-deficient (EP1–/–) mice using homologous recombination in embryonic stem cells derived from the DBA/1lacJ strain of mice. The EP1–/– mice are healthy and fertile, without any overt physical defects. However, their pain-sensitivity responses, tested in two acute prostaglandin-dependent models, were reduced by approximately 50%. This reduction in the perception of pain was virtually identical to that achieved through pharmacological inhibition of prostaglandin synthesis in wild-type mice using a cyclooxygenase inhibitor. In addition, systolic blood pressure is significantly reduced in EP1 receptor–deficient mice and accompanied by increased renin-angiotensin activity, especially in males, suggesting a role for this receptor in cardiovascular homeostasis. Thus, the EP1 receptor for PGE2 plays a direct role in mediating algesia and in regulation of blood pressure.

The inhibitory effects of estrogen (17β-estradiol) on atherosclerosis have been well documented in numerous animal models, and epidemiological evidence supports this protective effect in humans. The detailed mechanisms for this protection are not understood, but most are thought to be mediated through estrogen receptors (ERs), of which two are known (ERα and ERβ). To investigate the role of ERα in the atheroprotective effect of 17β-estradiol (E2), we ovariectomized female mice that lack apoE (AAee) or lack both apoE and ERα (ααee), and treated half of them with E2 for three months. E2 treatment of ovariectomized AAee females dramatically reduced the size of the lesions as well as their histological complexity. Plasma cholesterol was significantly reduced in this group, although the observed extent of protection by E2 was greater than could be explained solely by the change in lipid levels. In contrast, E2 treatment of ovariectomized ααee females caused minimal reduction in lesion size and no reduction in total plasma cholesterol compared with ααee mice without E2, demonstrating that ERα is a major mediator of the atheroprotective effect of E2. Nevertheless, E2 treatment significantly reduced the complexity of plaques in the ααee females, although not to the same degree as in AAee females, suggesting the existence of ERα-independent atheroprotective effects of E2.

Resistance to HIV infection in a small group of Kenyan sex workers is associated with CD8+-lymphocyte responses to HIV cytotoxic T-lymphocyte (CTL) epitopes. Eleven prostitutes meeting criteria for HIV resistance seroconverted between 1996 and 1999. The occurrence and specificity of preexisting HIV-1 epitope–specific responses were examined using the IFN-γ enzyme–linked immunospot assay, and any epitopes recognized were cloned and sequenced from the infecting viral isolate. Immunologic and behavioral variables were compared between late seroconverters and persistently uninfected sex worker controls. HIV-1 CTL epitope responses were present in four of six cases, 5–18 months before seroconversion, and their presence was confirmed by bulk CTL culture. A possible viral escape mutation was found in one of six epitopes. The key epidemiologic correlate of late seroconversion was a reduction in sex work over the preceding year. In persistently uninfected controls, a break from sex work was associated with a loss of HIV-specific CD8+ responses. Late seroconversion may occur in HIV-1–resistant sex workers despite preceding HIV-specific CD8+ responses. Seroconversion generally occurs in the absence of detectable CTL escape mutations and may relate to the waning of HIV-specific CD8+ responses due to reduced antigenic exposure.

Large granular lymphocyte (LGL) leukemia is characterized by the expansion of antigen-activated cytotoxic T lymphocytes. These leukemic cells are resistant to Fas-mediated apoptosis despite expressing high levels of Fas. We found that leukemic LGL from 19 patients displayed high levels of activated STAT3. Treatment of leukemic LGL with the JAK-selective tyrosine kinase inhibitor AG-490 induced apoptosis with a corresponding decrease in STAT-DNA binding activity. Moreover, using an antisense oligonucleotide approach to diminish STAT3 expression, we found that Fas sensitivity was restored in leukemic LGL. AG-490–induced apoptosis in leukemic LGL was independent of Bcl-xL or Bcl-2 expression. However, we found that the Bcl-2–family protein Mcl-1 was significantly reduced by AG-490 treatment. Activated STAT3 was shown to bind an SIE-related element in the murine mcl-1 promoter. Using a luciferase reporter assay, we demonstrated that v-src overexpression in NIH3T3 induced STAT3-dependent transcriptional activity from the mcl-1 promoter and increased endogenous Mcl-1 protein levels. We conclude that STAT3 activation contributed to accumulation of the leukemic LGL clones. These findings suggest that investigation should focus on novel strategies targeting STAT3 in the treatment of LGL leukemia.

IL-4 and CD40 ligation are essential for IgE synthesis by B cells. We have shown previously that hydrocortisone (HC) induces IgE synthesis in IL-4–stimulated human B cells. In this study we demonstrate that HC fails to induce IgE synthesis in B cells from CD40 ligand–deficient (CD40L-deficient) patients. Disruption of CD40L-CD40 interactions by soluble CD40-Ig fusion protein or anti-CD40L mAb blocked the capacity of HC to induce IgE synthesis in normal B cells. HC upregulated CD40L mRNA expression in PBMCs and surface expression of CD40L in PBMCs as well as in purified populations of T and B cells. Upregulation of CD40L mRNA in PBMCs occurred 3 hours after stimulation with HC and was inhibited by actinomycin D. Upregulation of CD40L mRNA and induction of IgE synthesis by HC were inhibited by the steroid hormone receptor antagonist RU-486. These results indicate that ligand-mediated activation of the glucocorticoid receptor upregulates CD40L expression in human lymphocytes.

Several lines of investigation suggest that the hypothalamic neuropeptide melanin-concentrating hormone (MCH) regulates body weight in mammals. Obese mice lacking functional leptin overexpress the MCH message in the fed or fasted state. Acute intracerebroventricular injection of MCH increases energy intake in rats. Mice lacking the MCH gene are lean. To test the hypothesis that chronic overexpression of MCH in mice causes obesity, we produced transgenic mice that overexpress MCH (MCH-OE) in the lateral hypothalamus at approximately twofold higher levels than normal mice. On the FVB genetic background, homozygous transgenic animals fed a high-fat diet ate 10% more and were 12% heavier at 13 weeks of age than wild-type animals, and they had higher systemic leptin levels. Blood glucose levels were higher both preprandially and after an intraperitoneal glucose injection. MCH-OE animals were insulin-resistant, as demonstrated by markedly higher plasma insulin levels and a blunted response to insulin; MCH-OE animals had only a 5% decrease in blood glucose after insulin administration, compared with a 31% decrease in wild-type animals. MCH-OE animals also exhibited a twofold increase in islet size. To evaluate the contribution of genetic background to the predisposition to obesity seen in MCH-OE mice, the transgene was bred onto the C57BL/6J background. Heterozygote C57BL/6J mice expressing the transgene showed increased body weight on a standard diet, confirming that MCH overexpression can lead to obesity.