The syndecans make up a family of transmembrane heparan sulfate proteoglycans that act as coreceptors with integrins and growth factor tyrosine kinase receptors. Syndecan-4 is upregulated in skin dermis after wounding, and, in cultured fibroblasts adherent to the ECM protein fibronectin, this proteoglycan signals cooperatively with β1 integrins. In this study, we generated mice in which the syndecan-4 gene was disrupted by homologous recombination in embryonic stem cells to test the hypothesis that syndecan-4 contributes to wound repair. Mice heterozygous or homozygous for the disrupted syndecan-4 gene are viable, fertile, and macroscopically indistinguishable from wild-type littermates. Compared with wild-type littermates, mice heterozygous or homozygous for the disrupted gene have statistically significant delayed healing of skin wounds and impaired angiogenesis in the granulation tissue. These results indicate that syndecan-4 is an important cell-surface receptor in wound healing and angiogenesis and that syndecan-4 is haplo-insufficient in these processes. 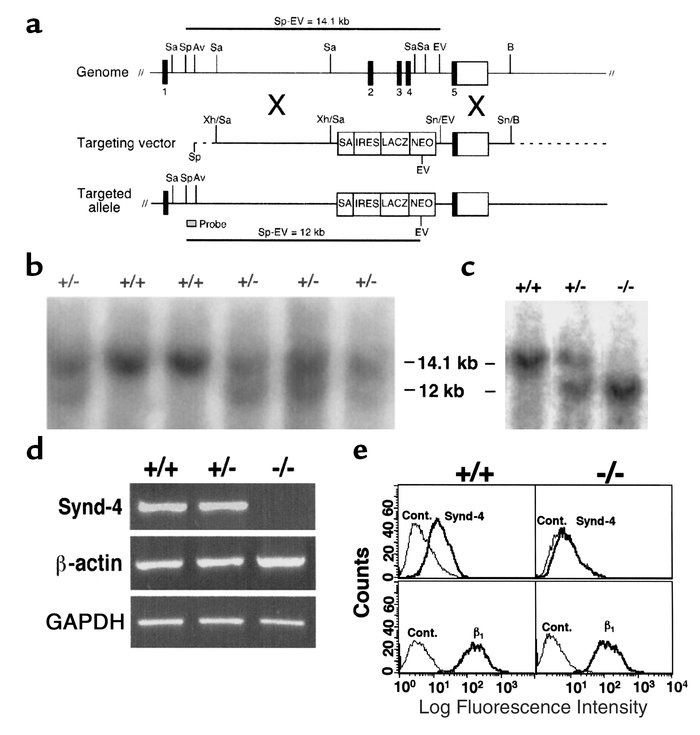 Generation and characterization of recombinant mice. () Structure of the murine gene, the targeting vector, and the targeted allele. Exons are numbered 1 through 5. This organization is similar to that reported by others (). Sa, SacI; Sp, SpeI; Av, AvrII; EV, EcoRV; B, BamHI; Xh, XhoI; Sn, SnaBI. SA, splice acceptor; IRES, internal ribosomal entry site; LACZ, β-galactosidase; NEO, neomycin resistance. () Southern blot analysis of ES clones. () Southern blot analysis of mice derived from matings between mice. Wild-type (14.1 kb) and targeted alleles (12 kb) are detected with the 5′ probe. () RT-PCR of mRNA results in a syndecan-4–specific 524-bp band from and cells but not from cells. mRNA for both β-actin and GAPDH is present in extracts of cells of all three genotypes. () Flow cytometric analysis of cell-surface syndecan-4 on skin fibroblasts. Syndecan-4 (Synd-4) is detected on cells (upper left) but not on cells (upper right). β1 Integrins (β1) are expressed on cells of both genotypes (lower panels). Secondary antibodies alone were used as control (Cont).