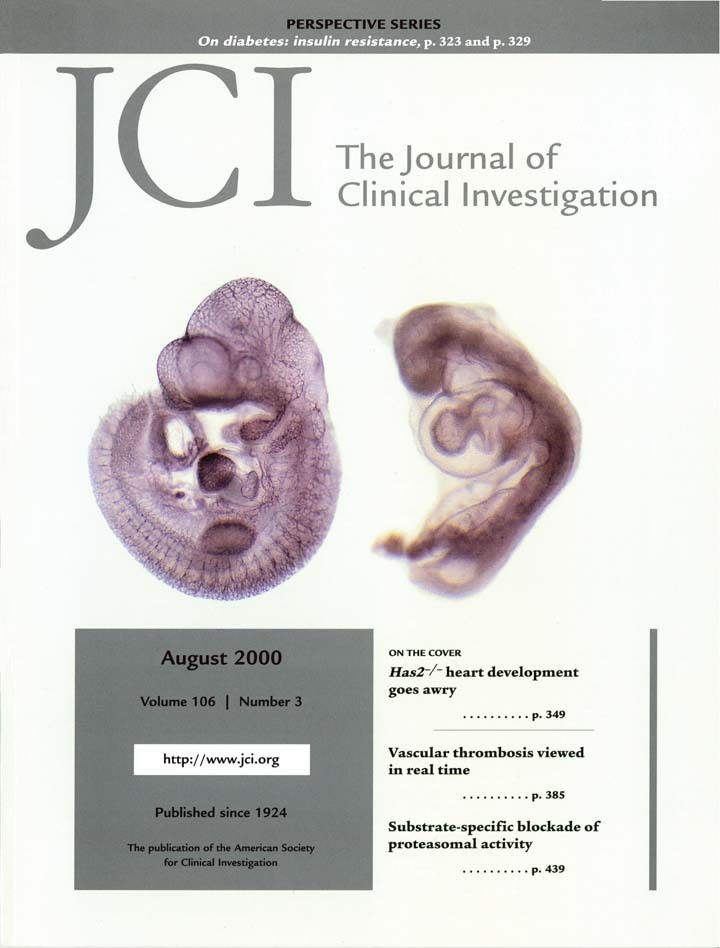 Hyaluronan is not just a goo!

Hyaluronan is not just a goo!

Helicobacter pylori resists gastric acidity by modulating the proton-gated urea channel UreI, allowing for pHout-dependent regulation of urea access to intrabacterial urease. We employed pH- and Ca2+-sensitive fluorescent dyes and confocal microscopy to determine the location, rate, and magnitude of pH changes in an H. pylori-AGS cell coculture model, comparing wild-type bacteria with nonpolar ureI-deletion strains (ureI-ve). Addition of urea at pH 5.5 to the coculture resulted first in elevation of bacterial periplasmic pH, followed by an increase of medium pH and then pH in AGS cells. No change in periplasmic pH occurred in ureI-deletion mutants, which also induced a slower increase in the pH of the medium. Pretreatment of the mutant bacteria with the detergent C12E8 before adding urea resulted in rapid elevation of bacterial cytoplasmic pH and medium pH. UreI-dependent NH3 generation by intrabacterial urease buffers the bacterial periplasm, enabling acid resistance at the low urea concentrations found in gastric juice. Perfusion of AGS cells with urea-containing medium from coculture at pH 5.5 did not elevate pHin or [Ca2+]in, unless the conditioned medium was first neutralized to elevate the NH3/NH4+ ratio. Therefore, cellular effects of intrabacterial ammonia generation under acidic conditions are indirect and not through a type IV secretory complex. The pHin and [Ca2+]in elevation that causes the NH3/NH4+ ratio to increase after neutralization of infected gastric juice may contribute to the gastritis seen with H. pylori infection.

We identified hyaluronan synthase-2 (Has2) as a likely source of hyaluronan (HA) during embryonic development, and we used gene targeting to study its function in vivo. Has2–/– embryos lack HA, exhibit severe cardiac and vascular abnormalities, and die during midgestation (E9.5–10). Heart explants from Has2–/– embryos lack the characteristic transformation of cardiac endothelial cells into mesenchyme, an essential developmental event that depends on receptor-mediated intracellular signaling. This defect is reproduced by expression of a dominant-negative Ras in wild-type heart explants, and is reversed in Has2–/– explants by gene rescue, by administering exogenous HA, or by expressing activated Ras. Conversely, transformation in Has2–/– explants mediated by exogenous HA is inhibited by dominant-negative Ras. Collectively, our results demonstrate the importance of HA in mammalian embryogenesis and the pivotal role of Has2 during mammalian development. They also reveal a previously unrecognized pathway for cell migration and invasion that is HA-dependent and involves Ras activation.

Depending on the method of immunization, a single administration of CFA may result in the development of a local inflammatory process or chronic polyadjuvant-induced arthritis (AA). We administered naked DNA vaccines encoding MIP-1α, MCP-1, MIP-1β, and RANTES to Lewis rats and confirmed that each of these vaccines induced immunological memory to the corresponding gene product. Upon induction of disease, this memory effectively inhibited the development of the autoimmune condition. Self-specific Ab’s developed in DNA-vaccinated animals were neutralizing in vitro and could adoptively transfer the beneficial effect of each vaccine. Repeated administration of the constructs encoding MCP-1, MIP-1α, or RANTES inhibited the development and progression of AA, even when each vaccine was administered only after the onset of disease. This suggests a highly effective way by which the immune system could be re-educated to generate protective immunity against its own harmful activities.

Gastrointestinal dysfunction is common in diabetic patients. In genetic (nonobese diabetic) and toxin-elicited (streptozotocin) models of diabetes in mice, we demonstrate defects in gastric emptying and nonadrenergic, noncholinergic relaxation of pyloric muscle, which resemble defects in mice harboring a deletion of the neuronal nitric oxide synthase gene (nNOS). The diabetic mice manifest pronounced reduction in pyloric nNOS protein and mRNA. The decline of nNOS in diabetic mice does not result from loss of myenteric neurons. nNOS expression and pyloric function are restored to normal levels by insulin treatment. Thus diabetic gastropathy in mice reflects an insulin-sensitive reversible loss of nNOS. In diabetic animals, delayed gastric emptying can be reversed with a phosphodiesterase inhibitor, sildenafil. These findings have implications for novel therapeutic approaches and may clarify the etiology of diabetic gastropathy.

We used intravital microscopy to observe the formation of platelet plugs in ferric chloride–injured arterioles of live mice. With this model, we evaluated thrombus growth in mice lacking von Willebrand factor (vWF) and fibrinogen (Fg), the two key ligands known to mediate platelet adhesion and aggregation. In vWF–/– mice, despite the presence of arterial shear, delayed platelet adhesion occurred and stable thrombi formed. In many mice, a persisting high-shear channel never occluded. Abundant thrombi formed in Fg–/– mice, but they detached from the subendothelium, which ultimately caused downstream occlusion in all cases. Surprisingly, mice deficient in both vWF and Fg successfully formed thrombi with properties characteristic of both mutations, leading to vessel occlusion in the majority of vessels. Platelets of these doubly deficient mice specifically accumulated fibronectin in their α-granules, suggesting that fibronectin could be the ligand supporting the platelet aggregation.

Euthyroid sick syndrome, characterized by low serum 3,5,3′-triiodothyronine (T3) with normal L-thyroxine levels, is associated with a wide variety of disorders including sepsis, malignancy, and AIDS. The degree of low T3 in circulation has been shown to correlate with the severity of the underlying disorders and with the prognosis. Elevated TNF-α levels, which accompany severe illness, are associated with decreased activity of type I 5′-deiodinase (5′-DI) in liver, leading us to speculate that high levels of this factor contribute to euthyroid sick syndrome. Here we demonstrate that the activation of NF-κB by TNF-α interferes with thyroid-hormone action as demonstrated by impairment of T3-dependent induction of 5′-DI gene expression in HepG2 cells. Inhibition of NF-κB action by a dominant-negative NF-κB reversed this effect and allowed T3 induction of 5′-DI. Furthermore, we show that an inhibitor of NF-κB activation, clarithromycin (CAM), can inhibit TNF-α–induced activation of NF-κB and restore T3-dependent induction of 5′-DI mRNA and enzyme activity. These results suggest that NF-κB activation by TNF-α is involved in the pathogenesis of euthyroid sick syndrome and that CAM could help prevent a decrease in serum T3 levels and thus ameliorate euthyroid sick syndrome.

In sickle cell anemia, the initiation, progression, and resolution of a vasoocclusive episode may present features of ischemia-reperfusion injury, with recurrent episodes of ischemia/hypoxia and reoxygenation promoting inflammation. Here, we have tested the hypothesis that hypoxia/reoxygenation triggers inflammation in the transgenic sickle mouse. In these mice, even at ambient air, peripheral leukocyte counts are elevated by 1.7-fold and neutrophil counts by almost 3-fold. Two hours of hypoxia, followed by reoxygenation, induced a greater than normal rolling flux and adhesion of leukocytes in these mice, but no leukocyte extravasation. When 3 hours of hypoxia was followed by reoxygenation, sickle mice, but not normal mice, showed a distinct inflammatory response characterized by an increased number of adherent and emigrated leukocytes. Because these events, which are exaggerated in sickle mice, are not seen in response to hypoxia alone, we conclude that they represent a form of reperfusion injury. Studies using an H2O2-sensitive probe revealed clear evidence of oxidant production in vascular endothelial cells after hypoxia/reoxygenation in sickle mice. Infusion of an anti–P-selectin antibody, but not an anti–E-selectin antibody, completely inhibited this inflammatory response and significantly increased wall shear rates. These findings suggest that leukocyte-endothelium interaction contribute to vasoocclusive events in the sickle mice and perhaps in human sickle disease.

Abnormal fat metabolism plays an important role in the pathogenesis of obesity-related type 2 diabetes mellitus. This study examined whether free fatty acid levels (FFAs), like insulin levels, oscillate rapidly in plasma. Peripheral and portal blood samples from dogs were assayed for FFA, glycerol, glucose, and insulin. FFA and glycerol showed correlated oscillatory profiles, with about 8 pulses/hour. Omental lipolysis was also pulsatile, with about 10 pulses/hour, and insulin levels oscillated rapidly in plasma with about 7 pulses/hour. We applied an insulin clamp, β-adrenergic blockade, or both together, to determine the driving force behind the FFA oscillation, and we analyzed our findings by approximate entropy (ApEn) for which lower values suggest regular pulses and higher values suggest disorder. Under basal conditions, ApEn was 0.3 ± 0.2. With insulin not oscillating, FFA still cycled at about 9 pulses/hour and the ApEn was 0.2 ± 0.1. In contrast, β-blockade, either in the presence or absence of an insulin clamp, removed the FFA oscillation in three of nine dogs. In the other six dogs, the oscillatory profile was unchanged, but ApEn was significantly higher than basal values, suggesting that the regularity of the profile was disrupted. These results suggest that the FFA oscillation is driven by the central nervous system, not by insulin.

Hyperkalemic periodic paralysis (HyperKPP) is an autosomal dominant skeletal muscle disorder caused by single mutations in the SCN4A gene, encoding the human skeletal muscle voltage-gated Na+ channel. We have now identified one allele with two novel mutations occurring simultaneously in the SCN4A gene. These mutations are found in two distinct families that had symptoms of periodic paralysis and malignant hyperthermia susceptibility. The two nucleotide transitions predict phenylalanine 1490→leucine and methionine 1493→isoleucine changes located in the transmembrane segment S5 in the fourth repeat of the α-subunit Na+ channel. Surprisingly, this mutation did not affect fast inactivation parameters. The only defect produced by the double mutant (F1490L-M1493I, expressed in human embryonic kidney 293 cells) is an enhancement of slow inactivation, a unique behavior not seen in the 24 other disease-causing mutations. The behavior observed in these mutant channels demonstrates that manifestation of HyperKPP does not necessarily require disruption of slow inactivation. Our findings may also shed light on the molecular determinants and mechanism of Na+ channel slow inactivation and help clarify the relationship between Na+ channel defects and the long-term paralytic attacks experienced by patients with HyperKPP.

Induction of NF-κB–dependent gene expression plays an important role in a number of biological processes including inflammation and ischemia-reperfusion injury. However, few attempts aimed at selective regulation of this transcription factor have been successful. We report here that a naturally occurring antibacterial peptide PR39 reversibly binds to the α7 subunit of the 26S proteasome and blocks degradation of NF-κB inhibitor IκBα by the ubiquitin-proteasome pathway without affecting overall proteasome activity. IκBα phosphorylation and ubiquitination occur normally after PR39 treatment, and binding of valosin-containing proteins is not impaired. The inhibition of IκBα degradation abolishes induction of NF-κB–dependent gene expression in cell culture and in mouse models of acute pancreatitis and myocardial infarction, including upregulation of endothelial adhesion proteins VCAM-1 and ICAM-1. In the latter model, sustained infusion of PR39 peptide resulted in significant reduction of myocardial infarct size. PR39 and related peptides may provide novel means to regulate cellular function and to control of NF-κB–dependent gene expression for therapeutic purposes.