We identified hyaluronan synthase-2 (Has2) as a likely source of hyaluronan (HA) during embryonic development, and we used gene targeting to study its function in vivo. Has2–/– embryos lack HA, exhibit severe cardiac and vascular abnormalities, and die during midgestation (E9.5–10). Heart explants from Has2–/– embryos lack the characteristic transformation of cardiac endothelial cells into mesenchyme, an essential developmental event that depends on receptor-mediated intracellular signaling. This defect is reproduced by expression of a dominant-negative Ras in wild-type heart explants, and is reversed in Has2–/– explants by gene rescue, by administering exogenous HA, or by expressing activated Ras. Conversely, transformation in Has2–/– explants mediated by exogenous HA is inhibited by dominant-negative Ras. Collectively, our results demonstrate the importance of HA in mammalian embryogenesis and the pivotal role of Has2 during mammalian development. They also reveal a previously unrecognized pathway for cell migration and invasion that is HA-dependent and involves Ras activation. 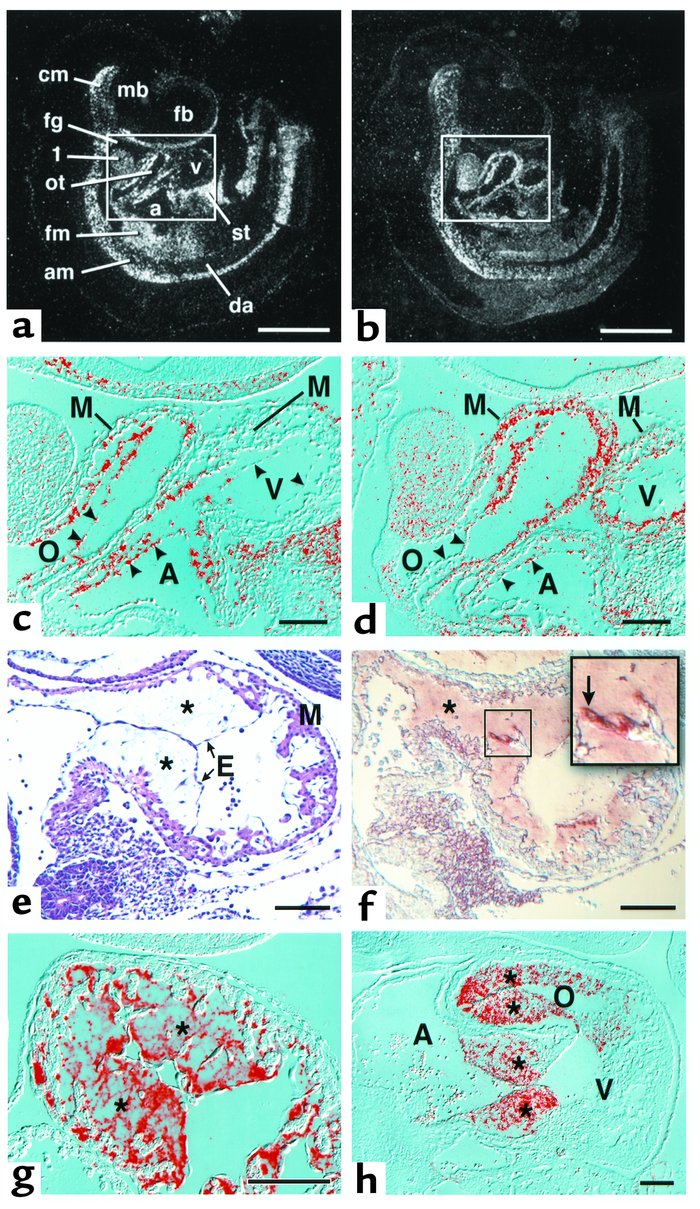 Has2 and versican are expressed in similar domains in the E9.5 mouse. () Has2 expression. cm, cranial mesenchyme; fb, forebrain; mb, midbrain; fg, foregut diverticulum; 1, first branchial arch; ot, outflow tract; v, ventricle; a, atrium; st, region of developing septum transversum, including liver primordium and proepicardial organ; fm, foregut mesenchyme; am, periaortic mesenchyme; da, dorsal aorta. () Versican expression. ( and ) Higher-power views of the heart region boxed in and , respectively. Has2 and versican mRNAs are expressed in the endothelium (indicated by arrowheads) of the outflow tract (O) and myocardium (M) of the AV canal region. A, atrium; V, ventricle. ( and ) AV canal region and cardiac cushions (indicated by asterisks) of an E9.5 mouse embryo stained with hematoxylin and eosin () and for HA using a biotinylated HA-binding protein (). E, endocardium. The boxed region contains endothelial cells that have transformed and are invading the underlying cushion tissue. These have abundant cell-surface HA (magnified in the inset). () Distribution of versican in the AV canal region, superimposing a Nomarski DIC image on a pseudocolored image of versican immunofluorescence. Note that the distribution of versican in is similar to the distribution of HA in . () Digital composite image of a Nomarski DIC image and a dark-field image of a 35S-labeled in situ hybridization of Has2 mRNA in the AV canal and outflow tract region of an E10.5 heart. Mesenchymal cells within the AV canal and outflow tract cushions express abundant Has2 mRNA. The signal within the atrium results from light scattered by red blood cells, not from silver grains. Bars in and = 500 μm; bars in – = 100 μm.