Gastrointestinal dysfunction is common in diabetic patients. In genetic (nonobese diabetic) and toxin-elicited (streptozotocin) models of diabetes in mice, we demonstrate defects in gastric emptying and nonadrenergic, noncholinergic relaxation of pyloric muscle, which resemble defects in mice harboring a deletion of the neuronal nitric oxide synthase gene (nNOS). The diabetic mice manifest pronounced reduction in pyloric nNOS protein and mRNA. The decline of nNOS in diabetic mice does not result from loss of myenteric neurons. nNOS expression and pyloric function are restored to normal levels by insulin treatment. Thus diabetic gastropathy in mice reflects an insulin-sensitive reversible loss of nNOS. In diabetic animals, delayed gastric emptying can be reversed with a phosphodiesterase inhibitor, sildenafil. These findings have implications for novel therapeutic approaches and may clarify the etiology of diabetic gastropathy. 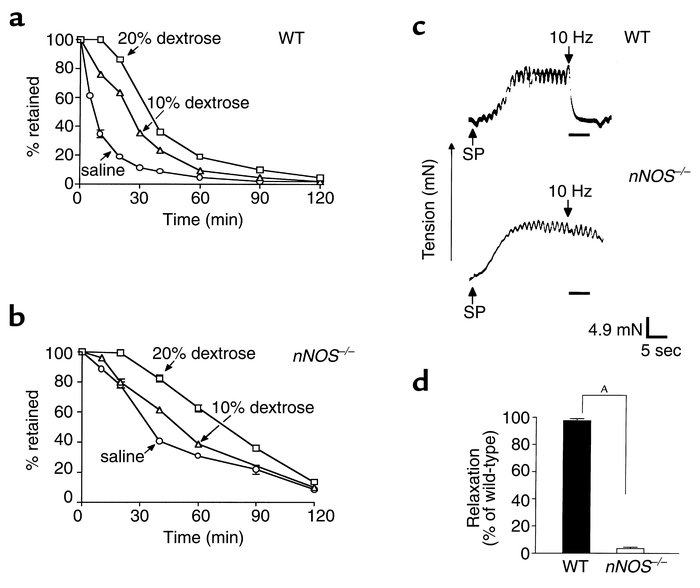 mice have delayed gastric emptying and loss of NO-dependent NANC relaxation. Gastric emptying in () wild-type (WT) mice and () mice. As described in Methods, phenol red–labeled saline (circles), 10% dextrose (triangles), or 20% dextrose (squares) was instilled into the stomachs of groups of mice, five to ten animals for each time point. The mice were sacrificed at the indicated times to determine the fraction of phenol red remaining in the stomachs as a measure of gastric emptying. Individual data points represent the mean (± SEM) for five to 10 determinations at each time point derived from groups of individual mice. In some instances, the error bars are small and contained within the symbol. The delay in gastric emptying observed in response to increased caloric content is consistent with known gastric physiology and is preserved in mice. () EFS-evoked NANC relaxations were monitored from wild-type and pylori as described (see Methods). After precontraction with SP (0.1 μM), wild-type pylori demonstrate relaxation (> 95%) in response to EFS (40 V, 10 Hz, 5 ms pulse for a duration of 5 seconds), whereas relaxation is nearly absent in pylori (< 5%). All EFS-evoked relaxations were blocked with 0.1 μM TTX and the nNOS inhibitors L-NNA (0.1 mM) and 7-NI (0.1 mM). The examples shown are from a representative experiment. () Quantification of NANC-induced relaxations in response to EFS for wild-type and pylori. Several pylori representing wild-type and mice were used to quantitatively analyze the degree of NANC relaxation in response to EFS. Data shown are the means (± SEM) of several determinations for each group of mice ( = 20 for wild-type and 10 for pylori). A < 0.01 compared with wild-type specimens.