Induction of NF-κB–dependent gene expression plays an important role in a number of biological processes including inflammation and ischemia-reperfusion injury. However, few attempts aimed at selective regulation of this transcription factor have been successful. We report here that a naturally occurring antibacterial peptide PR39 reversibly binds to the α7 subunit of the 26S proteasome and blocks degradation of NF-κB inhibitor IκBα by the ubiquitin-proteasome pathway without affecting overall proteasome activity. IκBα phosphorylation and ubiquitination occur normally after PR39 treatment, and binding of valosin-containing proteins is not impaired. The inhibition of IκBα degradation abolishes induction of NF-κB–dependent gene expression in cell culture and in mouse models of acute pancreatitis and myocardial infarction, including upregulation of endothelial adhesion proteins VCAM-1 and ICAM-1. In the latter model, sustained infusion of PR39 peptide resulted in significant reduction of myocardial infarct size. PR39 and related peptides may provide novel means to regulate cellular function and to control of NF-κB–dependent gene expression for therapeutic purposes. 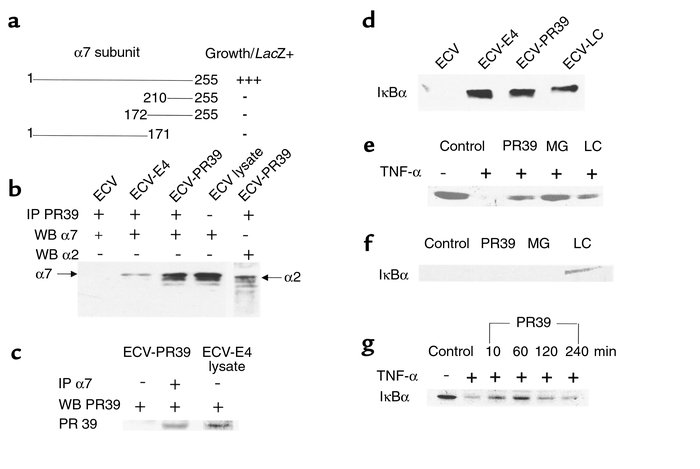 PR39-proteasome interaction and the effect on IκBα degradation and NF-κB activity. () Binding of PR39 to α7 and its fragments in the yeast two-hybrid assay. The extent of interaction of deletion mutants of the mouse α7 subunit and PR39 was analyzed using the yeast two-hybrid system. Only the full-length α7 construct was able to bind to PR39. ( and ) Coimmunoprecipitation of PR39 and 20S subunits in ECV cells. () Western blotting of anti-PR39 Ab immunoprecipitate from ECV, ECV-E4, or ECV-PR39 cells was carried out with anti-α7 (lanes 1–3) or anti-α2 (lane 5) Ab’s. Note the presence of bands corresponding to the α7 or α2 subunits in the immunoprecipitate of ECV-E4 or ECV-PR39; but not wild-type ECV cells, as well as the presence of additional bands, that likely correspond to other 20S proteasome subunits. Western blotting with anti-α7 Ab of the whole ECV cell lysate was used as a control (lane 4). () Western blotting with anti-PR39 Ab of anti-α7 Ab (or nonimmune IgG) immunoprecipitate of ECV-PR39 cells. A Western blot of ECV-E4 cell lysate (third lane) is used as a control for PR39 band. Note the presence of the PR39 band only in the anti-α7 Ab immunoprecipitate (lane 2 vs. 1). () Stable expression of PR39 increases IκBα expression in ECV304 cells. Western blot analysis of IκBα protein levels in normally proliferating wild-type ECV304 cells (ECV) or ECV-PR39 and ECV-E4 cells (lanes 1–3). ECV304 cells treated for 2 hours with 10 μM lactacystin (LC) were used as control. Note increased IκBα levels in ECV-E4 and ECV-PR39 cells as well as in lactacystin-treated cells. () PR39 prevents TNF-α–induced degradation of IκBα. U937 cells cultured in the absence (–) or presence of TNF-α (1 ng/mL). Ten minutes after TNF-α addition, the cells were washed, and IκBα protein levels were assessed by Western blotting. Note complete disappearance of IκBα in TNF-α–treated cells. Forty-five minutes of pretreatment with 100 nM of PR39 or 10 μM of MG132 (MG) or lactacystin (LC) before the addition of TNF-α blocked cytokine-induced degradation of IκBα. () Reversibility of PR39 inhibition of IκBα degradation. U937 cells were pretreated with 100 nM of PR39, 10 μM of either MG132 or lactacystin (LC), or buffer (control) for 45 minutes. The cells were then washed extensively with fresh medium. Then, after 45 minutes, TNF-α (1 ng/mL) was added to the medium, and the extent of IκBα degradation was determined 10 minutes later by Western blotting. Note preservation of IκBα by lactacystin (an irreversible proteasome inhibitor) but not by MG132 or PR39. () Time course of PR39-mediated inhibition of TNF-α–induced IκBα degradation. HUVEC cells were challenged with TNF-α 10, 60, 120, or 240 minutes after addition of PR39. Ten minutes later, the cells were lysed and IκBα levels were determined by Western blotting (lanes 3–6). Note peak protection 60 minutes after PR39 exposure and wearing off of the effect by 240 minutes. TNF-α induced full degradation of IκBα in the absence of PR39 (compare lanes 1 and 2).