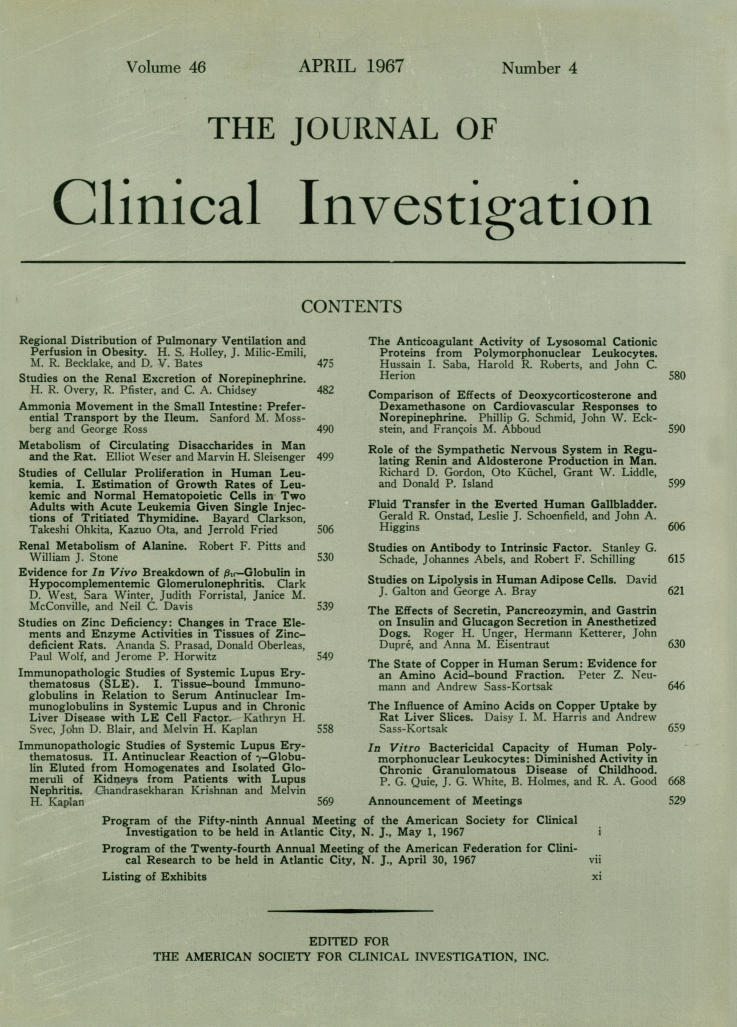 Regional Distribution of Pulmonary Ventilation and Perfusion in Obesity

Regional Distribution of Pulmonary Ventilation and Perfusion in Obesity

Five women and three men, all obese and weighing 95 to 140 kg, were studied by routine pulmonary function tests and by a radioactive xenon technique, while seated upright at rest, to measure the regional ventilation and perfusion distribution in the lung.

Studies on the Renal Excretion of Norepinephrine

Studies on the Renal Excretion of Norepinephrine

Studies were carried out in anesthetized dogs to investigate the renal clearance of norepinephrine (NE) and to determine the origin of this amine in the urine. Infused radioactive NE was cleared from plasma at a rate averaging 63.8% of the glomerular filtration rate. NE was shown to be freely filterable, and evidence has been presented which suggests but does not prove that the amine is partially reabsorbed from the glomerular filtrate; metabolism of NE in the tubular fluid by catechol-o-methyl transferase has not been excluded. The clearance of this catecholamine was not affected by changes in urine pH or flow. Total chronic denervation of one kidney was shown to have no effect on the rate of excretion of endogenous NE. Therefore, the NE that is excreted in the urine would appear to be solely derived from the catecholamines in circulating blood.

Ammonia Movement in the Small Intestine: Preferential Transport by the Ileum

Ammonia Movement in the Small Intestine: Preferential Transport by the Ileum

Isolated, surviving sacs of everted small intestine were used to characterize ammonia transport in the golden hamster. Jejunal and ileal sacs incubated aerobically in ammonia-free test solution liberated the same quantity of ammonia as did sacs that were filled and immediately emptied of their contents, indicating no significant evolution of metabolic ammonia.

Metabolism of Circulating Disaccharides in Man and the Rat

Metabolism of Circulating Disaccharides in Man and the Rat

The metabolism of circulating disaccharides was studied in adult humans and rats. After iv infusions of 10 g of either lactose, sucrose, or maltose in four adults, no rise in blood glucose was noted. A mean of 8.7±1.89 g of the lactose and 6.3±1.39 g of the sucrose was excreted in the 24-hour urine sample. Only 0.11±0.03 g of the infused maltose was recovered in the urine, suggesting that the maltose was metabolized.

Studies of Cellular Proliferation in Human Leukemia. I. Estimation of Growth Rates of Leukemic and Normal Hematopoietic Cells in Two Adults with Acute Leukemia Given Single Injections of Tritiated Thymidine

Studies of Cellular Proliferation in Human Leukemia. I. Estimation of Growth Rates of Leukemic and Normal Hematopoietic Cells in Two Adults with Acute Leukemia Given Single Injections of Tritiated Thymidine

Two adults with rapidly progressive acute myeloblastic and myelomonoblastic leukemia were given single injections of tritiated thymidine, and measurements were made of the growth rates of their leukemic and normal hematopoietic cells by radioautographic methods. Although almost all leukemic blasts in both marrow and blood were metabolically active as shown by their ability to incorporate tritiated uridine and leucine in vitro, only 5.6% and 6.1% of the blasts in the marrow and even fewer in the blood incorporated tritiated thymidine. The mitotic indexes of the marrow blasts were 0.66% and 0.52%; no circulating blasts were dividing. The mean generation times of the actively proliferating blasts were estimated to be 49 and 83 hours. This cannot be equated with the doubling time of the total leukemic population as there is evidence that many blasts fail to continue dividing and die. The mean durations of the phases of the blasts' mitotic cycles were as follows: DNA synthesis (S) = 22 and 19 hours, premitosis (G2) = 3 hours, mitosis (M) = 0.47 and 0.62 hour (minimal estimates), and postmitosis (G1) = 24 and 61 hours. In both patients the maximal mean transit time of the blasts in the blood was 36 hours, and the minimal numbers of actively dividing blasts present were 1.6 and 2.6 × 109 per kg of body weight.

In the acidotic dog, alanine is extracted from plasma and utilized as a precursor of ammonia. Simultaneously, it is formed de novo within tubular cells and added to renal venous blood. When plasma concentration is within a normal range, production of alanine greatly exceeds utilization. Increasing the plasma concentration reduces production and increases utilization of plasma alanine. The infusion of glutamine increases the renal production of alanine without appreciable change in utilization of plasma alanine. These results are consonant with the view that alanine is metabolized by transamination with α-ketoglutarate to form glutamate, which is subsequently deaminated oxidatively to liberate ammonia. Conversely, alanine is formed by transamination of pyruvate with either glutamate or glutamine and is added to renal venous blood. The balance between production and utilization is dependent, at least in part, on the concentrations of the reactants.

Evidence for In Vivo Breakdown of β1C-Globulin in Hypocomplementemic Glomerulonephritis

Evidence for In Vivo Breakdown of β1C-Globulin in Hypocomplementemic Glomerulonephritis

Evidence has been obtained for the presence in vivo of alpha2D-globulin, a breakdown product of serum β1C-globulin, in patients with acute and persistent hypocomplementemic glomerulonephritis. The protein has been identified by immunoelectrophoretic analysis, and the amounts present have been determined by direct measurement of specific antigenic determinants present on alpha2D. β1A-Globulin, another breakdown product of β1C-globulin, may also be present in vivo in severely hypocomplementemic patients, but its levels are much lower than those of alpha2D-globulin.

Studies on Zinc Deficiency: Changes in Trace Elements and Enzyme Activities in Tissues of Zinc-deficient Rats

Studies on Zinc Deficiency: Changes in Trace Elements and Enzyme Activities in Tissues of Zinc-deficient Rats

Zinc content of testes, bones, esophagus, kidneys, and muscles was decreased, whereas iron content was increased in the testes of zinc-deficient rats compared to restrictedly fed control rats. Histochemical enzyme determinations revealed reduced activities of certain enzymes in the testes, bones, esophagus, and kidneys. In the testes, lactic dehydrogenase (LDH), malic dehydrogenase (MDH), alcohol dehydrogenase (ADH), and NADH diaphorase; in the bones, LDH, MDH, ADH, and alkaline phosphatase; in the esophagus, MDH, ADH, and NADH diaphorase; and in the kidneys, MDH and alkaline phosphatase were decreased in zinc-deficient rats compared to restrictedly fed controls. Succinic dehydrogenase (SDH) revealed no significant changes under the conditions of our experiments in various groups of rats that were investigated.

We studied the composition of tissue-bound immunoglobulins and of antinuclear factors by immunofluorescent techniques in five patients with systemic lupus and two with chronic liver disease associated with positive LE cell tests. Renal glomeruli in all seven demonstrated deposits of bound γG-globulin and complement, although the presence of γA- and γM-immunoglobulins was variable. Blood vessel walls contained primarily γG-globulin and complement in the systemic lupus patients, but such deposits were absent from vessels in the two with chronic liver disease.

The Anticoagulant Activity of Lysosomal Cationic Proteins from Polymorphonuclear Leukocytes

The Anticoagulant Activity of Lysosomal Cationic Proteins from Polymorphonuclear Leukocytes

A cationic protein fraction from rabbit polymorphonuclear leukocyte lysosomes has been shown to exert a potent anticoagulant effect on human blood in vitro. The anticoagulant activity is detectable in the whole blood clotting time, the recalcification time of platelet-rich plasma, the prothrombin time, the partial thromboplastin time, and the thromboplastin generation test. The lysosomal cationic proteins do not inhibit any of the known specific procoagulants. They appear to inhibit clotting by blocking the formation of intrinsic thromboplastin possibly by interfering with the role of phospholipids in the reaction involving Factors V and X and calcium.

Cardiovascular responses to graded iv infusions of norepinephrine were observed in 24 dogs that had been treated for 1 week with either placebo, dexamethasone, or deoxycorticosterone. Eight dogs served as control and received daily iv injections of placebo; eight dogs received the mineralocorticoid, deoxycorticosterone; and eight received the glucocorticoid, dexamethasone. The three groups did not differ with respect to base-line hemodynamic variables either before administration of norepinephrine or after autonomic reflexes had been inhibited by ganglionic blockade. Comparisons of the three groups' hemodynamic responses to norepinephrine were made both before and after ganglionic blockade with the parallel line bioassay as a statistical test.

The rates of fluid transfer across human gallbladders obtained at cholecystectomy for cholelithiasis were determined by the measurement of weight changes of everted preparations under controlled conditions. Active transport of fluid from the mucosal to the serosal surface was indicated since weight gain occurred with the same solution on both sides of the membrane and against hydrostatic, osmotic, and potential differences. With respect to sodium, the fluid transferred was isotonic to the bathing solutions. Metabolic inhibitors and temperature extremes inhibited weight gain.

Studies on Antibody to Intrinsic Factor

Studies on Antibody to Intrinsic Factor

Sera from a group of 79 patients with pernicious anemia were studied for the presence of antibody to intrinsic factor. Two general types of antibody activity were found, and it was possible to distinguish three groups of pernicious anemia sera on the basis of their content of these types.

Epinephrine stimulated lipolysis and the uptake of oxygen by subcutaneous adipose cells of man. When glucose-14C was present in the medium, its utilization was not increased by epinephrine, although lipolysis was accelerated. Insulin did not reduce the production of fatty acids that had been stimulated by epinephrine.

The Effects of Secretin, Pancreozymin, and Gastrin on Insulin and Glucagon Secretion in Anesthetized Dogs

The Effects of Secretin, Pancreozymin, and Gastrin on Insulin and Glucagon Secretion in Anesthetized Dogs

The effects upon islet hormone secretion of highly purified preparations of secretin and of pancreozymin-cholecystokinin and of a crude gastrin-containing extract of hog antrum have been studied in acutely operated dogs. All three preparations were shown to cause a striking increase in insulin concentration in the pancreaticoduodenal venous plasma after their rapid endoportal injection in anesthetized dogs. With each hormone preparation, the peak in insulin secretion occurred 1 minute after injection, and a rapid decline was observed immediately thereafter. Whereas secretin and gastrin failed to alter significantly the pancreaticoduodenal venous glucagon or arterial glucose concentration, pancreozymin caused a dramatic rise in pancreaticoduodenal venous glucagon concentration, which reached a peak 3 minutes after injection, and hyperglycemia was noted to occur soon thereafter. Endoportal infusion of secretin and pancreozymin for 20 minutes caused responses that were sustained but qualitatively identical to the responses noted after rapid injection of the hormones. The beta-cytotropic effect of secretin was abolished by the infusion of epinephrine.

The State of Copper in Human Serum: Evidence for an Amino Acid-bound Fraction

The State of Copper in Human Serum: Evidence for an Amino Acid-bound Fraction

Addition of physiological concentrations of 20 l-amino acids to the incubation medium facilitates the uptake of copper by liver slices. This effect can be observed in a wide range of initial concentrations of copper in the medium, including the low physiological concentrations. The uptake of copper was not influenced by the addition of sodium lactate or d-glucose to the incubation media. The facilitation of copper uptake by amino acids is abolished under anaerobic conditions. It is not affected by the presence of 2,4-dinitrophenol. The type of transport and its exact mechanism have not been established, but this type of transport does not fulfill the criteria for classification as simple diffusion.

Diminished bactericidal capacity was found to be characteristic of polymorphonuclear leukocytes (PMN) from five children with the clinical syndrome of granulomatous disease of childhood. The PMN from these children demonstrated nearly normal phagocytic capacity, and the majority of viable bacteria, after 2 hours of incubation in the phagocytosis system, were found associated with leukocytes.