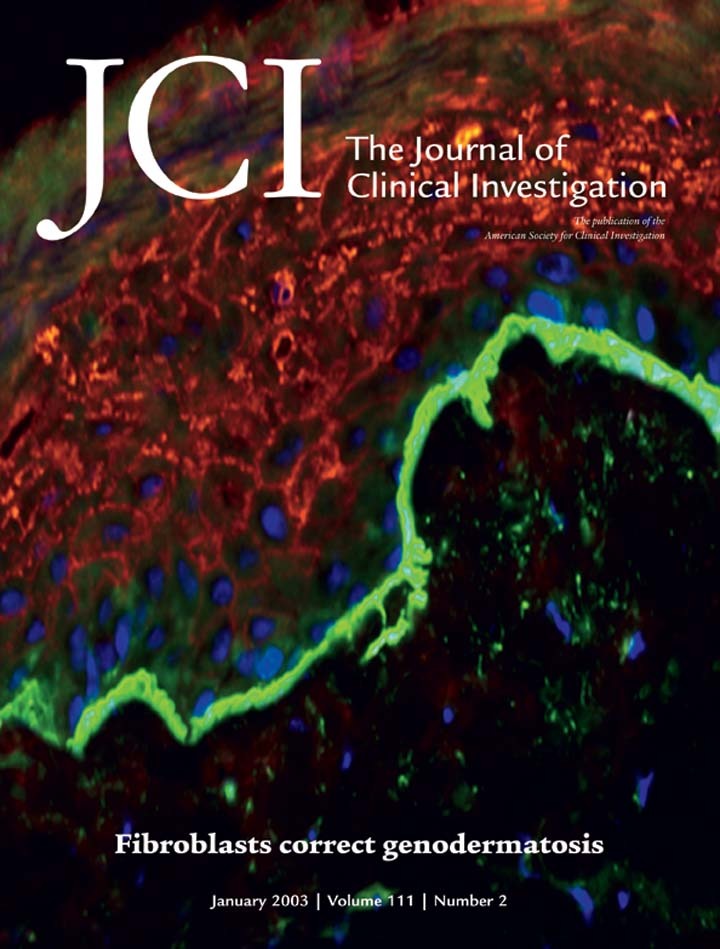 Oxidative stress and nitration in neurodegeneration: Cause, effect, or association?

Oxidative stress and nitration in neurodegeneration: Cause, effect, or association?

A role for nitric oxide in hydroxyurea-mediated fetal hemoglobin induction

A role for nitric oxide in hydroxyurea-mediated fetal hemoglobin induction

The irresistible biology of resistin

The irresistible biology of resistin

Genotype, phenotype: upstairs, downstairs in the family of cardiomyopathies

Genotype, phenotype: upstairs, downstairs in the family of cardiomyopathies

The intricate interplay among body weight, stress, and the immune response to friend or foe

The intricate interplay among body weight, stress, and the immune response to friend or foe

Hematopoietic progenitor cells (HPCs) normally reside in the bone marrow (BM) but can be mobilized into the peripheral blood (PB) after treatment with GCSF or chemotherapy. In previous studies, we showed that granulocyte precursors accumulate in the BM during mobilization induced by either GCSF or cyclophosphamide (CY), leading to the accumulation of active neutrophil proteases in this tissue. We now report that mobilization of HPCs by GCSF coincides in vivo with the cleavage of the N-terminus of the chemokine receptor CXCR4 on HPCs resident in the BM and mobilized into the PB. This cleavage of CXCR4 on mobilized HPCs results in the loss of chemotaxis in response to the CXCR4 ligand, the chemokine stromal cell–derived factor-1 (SDF-1/CXCL12). Furthermore, the concentration of SDF-1 decreased in vivo in the BM of mobilized mice, and this decrease coincided with the accumulation of serine proteases able to directly cleave and inactivate SDF-1. Since both SDF-1 and its receptor, CXCR4, are essential for the homing and retention of HPCs in the BM, the proteolytic degradation of SDF-1, together with that of CXCR4, could represent a critical step leading to the mobilization of HPCs into the PB in response to GCSF or CY.

This study addressed the contribution of acidic sphingomyelinase (ASMase) in TNF-α–mediated hepatocellular apoptosis. Cultured hepatocytes depleted of mitochondrial glutathione (mGSH) became sensitive to TNF-α, undergoing a time-dependent apoptotic cell death preceded by mitochondrial membrane depolarization, cytochrome c release, and caspase activation. Cyclosporin A treatment rescued mGSH-depleted hepatocytes from TNF-α–induced cell death. In contrast, mGSH-depleted hepatocytes deficient in ASMase were resistant to TNF-α–mediated cell death but sensitive to exogenous ASMase. Furthermore, although in vivo administration of TNF-α or LPS to galactosamine-pretreated ASMase+/+ mice caused liver damage, ASMase–/– mice exhibited minimal hepatocellular injury. To analyze the requirement of ASMase, we assessed the effect of glucosylceramide synthetase inhibition on TNF-α–mediated apoptosis. This approach, which blunted glycosphingolipid generation by TNF-α, protected mGSH-depleted ASMase+/+ hepatocytes from TNF-α despite enhancement of TNF-α–stimulated ceramide formation. To further test the involvement of glycosphingolipids, we focused on ganglioside GD3 (GD3) because of its emerging role in apoptosis through interaction with mitochondria. Analysis of the cellular redistribution of GD3 by laser scanning confocal microscopy revealed the targeting of GD3 to mitochondria in ASMase+/+ but not in ASMase–/– hepatocytes. However, treatment of ASMase–/– hepatocytes with exogenous ASMase induced the colocalization of GD3 and mitochondria. Thus, ASMase contributes to TNF-α–induced hepatocellular apoptosis by promoting the mitochondrial targeting of glycosphingolipids.

Restrictive cardiomyopathy (RCM) is an uncommon heart muscle disorder characterized by impaired filling of the ventricles with reduced volume in the presence of normal or near normal wall thickness and systolic function. The disease may be associated with systemic disease but is most often idiopathic. We recognized a large family in which individuals were affected by either idiopathic RCM or hypertrophic cardiomyopathy (HCM). Linkage analysis to selected sarcomeric contractile protein genes identified cardiac troponin I (TNNI3) as the likely disease gene. Subsequent mutation analysis revealed a novel missense mutation, which cosegregated with the disease in the family (lod score: 4.8). To determine if idiopathic RCM is part of the clinical expression of TNNI3 mutations, genetic investigations of the gene were performed in an additional nine unrelated RCM patients with restrictive filling patterns, bi-atrial dilatation, normal systolic function, and normal wall thickness. TNNI3 mutations were identified in six of these nine RCM patients. Two of the mutations identified in young individuals were de novo mutations. All mutations appeared in conserved and functionally important domains of the gene.

Autoimmune (type 1) diabetes mellitus results from the destruction of insulin-producing pancreatic β cells by T lymphocytes. Prediction of cell-mediated autoimmune diseases by direct detection of autoreactive T cells in peripheral blood has proved elusive, in part because of their low frequency and reduced avidity for peptide MHC ligands.

The adipose-derived hormone resistin is postulated to link obesity to insulin resistance and diabetes. Here, the infusion of either resistin or the resistin-like molecule–β (RELMβ) rapidly induced severe hepatic but not peripheral insulin resistance. In the presence of physiologic hyperinsulinemia, the infusion of purified recombinant resistin, increasing circulating resistin levels by approximately twofold to 15-fold, inhibited glucose metabolism such that lower rates of glucose infusion were required to maintain the plasma glucose concentration at basal levels. The effects of resistin and RELMβ on in vivo insulin action were completely accounted for by a marked increase in the rate of glucose production. These results support the notion that a novel family of fat- and gut-derived circulating proteins modulates hepatic insulin action.

Hydroxyurea treatment of patients with sickle-cell disease increases fetal hemoglobin (HbF), which reduces hemoglobin S polymerization and clinical complications. Despite its use in the treatment of myeloproliferative diseases for over 30 years, its mechanism of action remains uncertain. Recent studies have demonstrated that hydroxyurea generates the nitric oxide (NO) radical in vivo, and we therefore hypothesized that NO-donor properties might determine the hemoglobin phenotype. We treated both K562 erythroleukemic cells and human erythroid progenitor cells with S-nitrosocysteine (CysNO), an NO donor, and found similar dose- and time-dependent induction of γ-globin mRNA and HbF protein as we observed with hydroxyurea. Both hydroxyurea and CysNO increased cGMP levels, and the guanylyl cyclase inhibitors ODQ, NS 2028, and LY 83,538 abolished both the hydroxyurea- and CysNO-induced γ-globin expression. These data provide strong evidence for an NO-derived mechanism for HbF induction by hydroxyurea and suggest possibilities for therapies based on NO-releasing or -potentiating agents.

Prolactin is a peptide hormone produced by the anterior pituitary gland that is critical in lactation. Prolactin can also be produced by lymphocytes, and both B and T cells express prolactin receptors. These findings have suggested that prolactin has immunomodulatory functions. Studies in spontaneously autoimmune hosts have demonstrated a role for prolactin in augmenting autoreactivity. We chose to analyze prolactin effects on anti-DNA B cells in nonspontaneously autoimmune female BALB/c mice transgenic for the heavy chain of an anti-DNA antibody. Treatment with prolactin for 4 weeks induced a lupus-like phenotype with an increased number of transgene-expressing B cells, elevated serum anti-DNA antibody titers, and glomerular immunoglobulin deposits. Prolactin caused a decrease in the population of transitional B cells and an increase in mature follicular and marginal zone B cells. The DNA-reactive B cells had a follicular cell phenotype. Anti-DNA hybridomas demonstrated that prolactin alters selection of the naive B cell repertoire. The expansion and activation of anti-DNA B cells in prolactin-treated R4A-γ2b BALB/c mice was dependent on the presence of CD4+ T cells. Finally, treatment with prolactin was unable to break tolerance in R4A-γ2b transgenic C57Bl/6 mice, suggesting that responsiveness of the immune system to prolactin is genetically determined.