The adipose-derived hormone resistin is postulated to link obesity to insulin resistance and diabetes. Here, the infusion of either resistin or the resistin-like molecule–β (RELMβ) rapidly induced severe hepatic but not peripheral insulin resistance. In the presence of physiologic hyperinsulinemia, the infusion of purified recombinant resistin, increasing circulating resistin levels by approximately twofold to 15-fold, inhibited glucose metabolism such that lower rates of glucose infusion were required to maintain the plasma glucose concentration at basal levels. The effects of resistin and RELMβ on in vivo insulin action were completely accounted for by a marked increase in the rate of glucose production. These results support the notion that a novel family of fat- and gut-derived circulating proteins modulates hepatic insulin action. 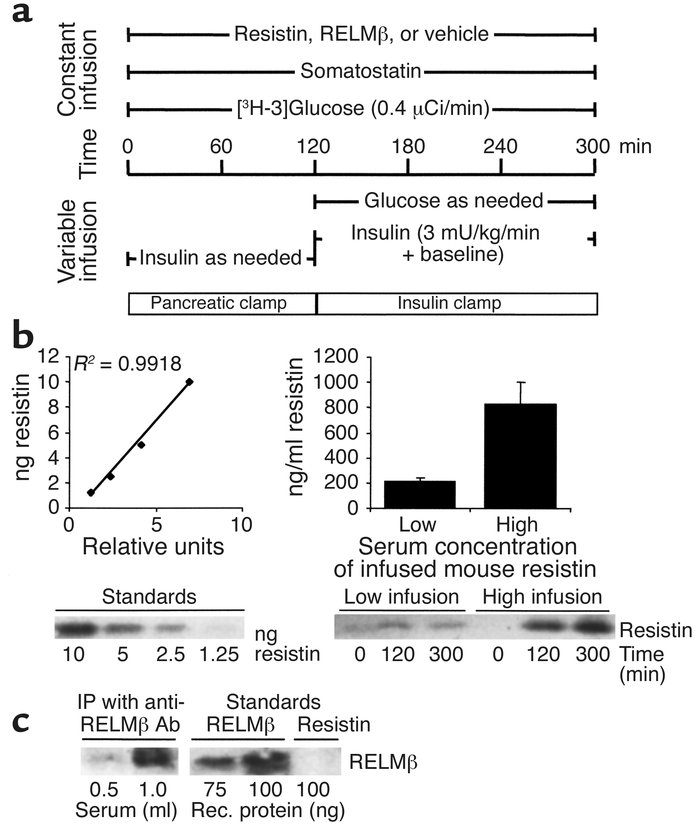 () Schematic representation of the pancreatic and insulin clamp procedure. During the first 2 hours, the rate of insulin infusion was adjusted periodically in order to maintain the plasma glucose concentration at basal levels (insulin as needed). During the last 30 minutes of this 2-hour period, the rate of insulin infusion was stable in all rats and these individualized rates were continued throughout the study. At the completion of the pancreatic clamp (at = 120 minutes), an additional infusion of insulin (3 mU/kg/min) was administered to similarly raise the plasma insulin levels in all groups, and a variable infusion of a 25% glucose solution was started and periodically adjusted (glucose as needed) to maintain the plasma glucose concentration at approximately 7 mM for the rest of the study. () Time course of plasma resistin during pancreatic and insulin clamps. Quantitation of Western blots was achieved by comparison to a standard curve of increasing amounts of recombinant mouse resistin (left panels). Bottom panels show representative Western blot analysis of plasma from rats infused with mouse resistin (mU/kg/min) at the rate of 5 μg/h (low) and 25 μg/h (high). A single band was recognized at about 10 kDa. Comparison with standards allowed us to estimate the serum concentration of mouse resistin during the infusion studies. Basal levels of plasma resistin in C57BL/6 mice averaged 81 ± 23 ng/ml using this semiquantitative Western analysis. () Detection of plasma RELMβ in rat plasma. One-half ml or 1 ml of serum was used in immunoprecipitation (IP) experiments followed by Western blots (left). The antibody detected recombinant (Rec.) RELMβ but not recombinant resistin (right).