Prolactin is a peptide hormone produced by the anterior pituitary gland that is critical in lactation. Prolactin can also be produced by lymphocytes, and both B and T cells express prolactin receptors. These findings have suggested that prolactin has immunomodulatory functions. Studies in spontaneously autoimmune hosts have demonstrated a role for prolactin in augmenting autoreactivity. We chose to analyze prolactin effects on anti-DNA B cells in nonspontaneously autoimmune female BALB/c mice transgenic for the heavy chain of an anti-DNA antibody. Treatment with prolactin for 4 weeks induced a lupus-like phenotype with an increased number of transgene-expressing B cells, elevated serum anti-DNA antibody titers, and glomerular immunoglobulin deposits. Prolactin caused a decrease in the population of transitional B cells and an increase in mature follicular and marginal zone B cells. The DNA-reactive B cells had a follicular cell phenotype. Anti-DNA hybridomas demonstrated that prolactin alters selection of the naive B cell repertoire. The expansion and activation of anti-DNA B cells in prolactin-treated R4A-γ2b BALB/c mice was dependent on the presence of CD4+ T cells. Finally, treatment with prolactin was unable to break tolerance in R4A-γ2b transgenic C57Bl/6 mice, suggesting that responsiveness of the immune system to prolactin is genetically determined. 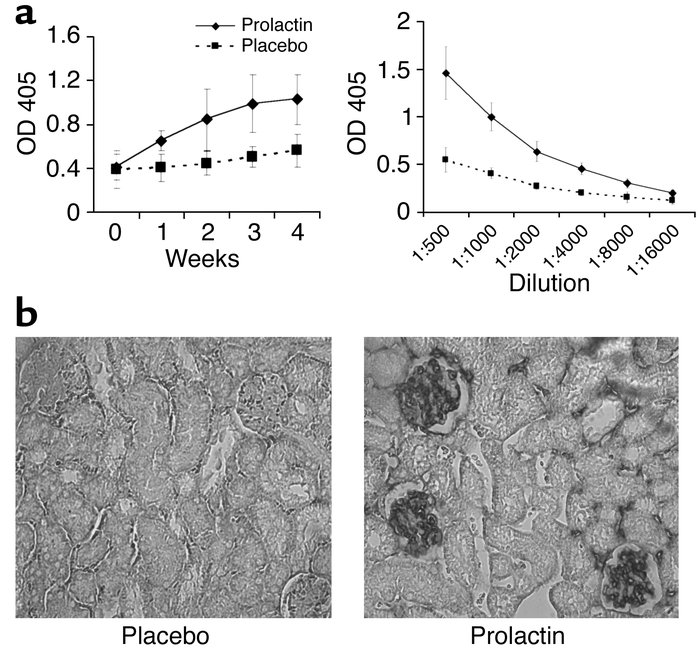