Restrictive cardiomyopathy (RCM) is an uncommon heart muscle disorder characterized by impaired filling of the ventricles with reduced volume in the presence of normal or near normal wall thickness and systolic function. The disease may be associated with systemic disease but is most often idiopathic. We recognized a large family in which individuals were affected by either idiopathic RCM or hypertrophic cardiomyopathy (HCM). Linkage analysis to selected sarcomeric contractile protein genes identified cardiac troponin I (TNNI3) as the likely disease gene. Subsequent mutation analysis revealed a novel missense mutation, which cosegregated with the disease in the family (lod score: 4.8). To determine if idiopathic RCM is part of the clinical expression of TNNI3 mutations, genetic investigations of the gene were performed in an additional nine unrelated RCM patients with restrictive filling patterns, bi-atrial dilatation, normal systolic function, and normal wall thickness. TNNI3 mutations were identified in six of these nine RCM patients. Two of the mutations identified in young individuals were de novo mutations. All mutations appeared in conserved and functionally important domains of the gene. 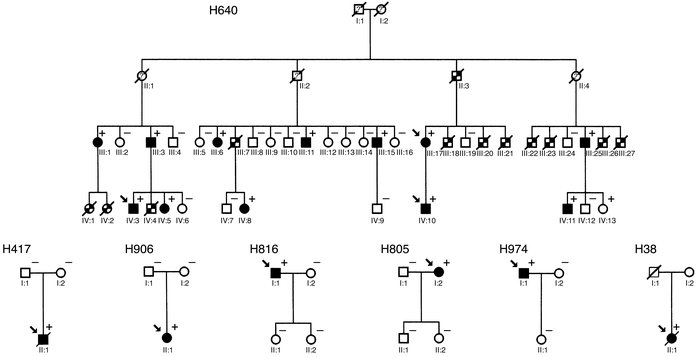 Pedigree drawings of restrictive cardiomyopathy families affected by cardiac troponin I mutations. Squares indicate male family members; circles, female family members; symbols with slash, deceased individuals; open symbols, unaffected individuals; filled symbols, individuals affected by RCM (indicated by arrows) or HCM; checkered symbols, individuals who died suddenly; question mark, unknown clinical status. Plus sign indicates presence of mutation, whereas minus sign indicates absence of mutation. Generation II of family H640 consisted of a total of 13 siblings, of which 9 were available for this investigation. Four generation-II siblings were obligate carriers of the mutation (included in the pedigree drawing with their offspring), while five remaining siblings were shown not to carry the mutation. Two of the obligate carriers (III-7, II-3) died suddenly at the age of 40. The remaining obligate carriers (II-1, II-2, II-4), reached the age of 63, 59, and 51 years, respectively. Ten sudden deaths appeared in young individuals who had a 50% chance of having inherited the disease (IV-1/2/4; III-18/20/21/22/23/26/27). Their average age of death was 25 years (16–33 years), and most had symptoms of cardiac disease prior to their death. Individual IV-13 was shown to be a healthy carrier of the mutation at the age of 5 years.