Liver sinusoidal endothelial cells (LSECs) have long been noted to contribute to liver regeneration after liver injury. In normal liver, the major cellular source of HGF is the hepatic stellate cell, but after liver injury, HGF expression has been thought to increase markedly in proliferating LSECs. However, emerging data suggest that even after injury, LSEC expression of HGF does not increase greatly. In contrast, bone marrow progenitor cells of LSECs (BM SPCs), which are rich in HGF, are recruited to the liver after injury. This Review examines liver regeneration from the perspective that BM SPCs that have been recruited to the liver, rather than mature LSECs, drive liver regeneration.

LSECs are unique endothelial cells, both morphologically and functionally. LSECs are small cells, with a diameter of around 6.5 μm when isolated, that are stretched out into a very thin layer lining the hepatic sinusoids. LSECs are the only mammalian endothelial cells that combine non-diaphragmed fenestrae with the lack of a basement membrane. The fenestrae are clustered together in sieve plates, and the size and number of fenestrae differ in LSECs from the periportal, midlobular and centrilobular regions of the liver (6–10). LSECs are also functionally unique. The high activity of receptor-mediated endocytosis provides LSECs with a high-rate, high-capacity system to clear colloids and soluble waste macromolecules from the circulation (11, 12). The three main receptors for endocytosis are the mannose receptor, the scavenger receptor, and the Fcγ receptor IIb2 (12). LSECs are the initial target of injury for some hepatotoxic drugs and toxins (13–20) and are susceptible to ischemia-reperfusion injury (21–24).

Stem cells are defined as cells that divide asymmetrically, producing one daughter cell that is a stem cell and one daughter cell that is either a progenitor cell or a specialized cell (Figure 2). By definition, stem cells can self-renew and give rise indefinitely to more cells of the same type. Progenitor cells, also known as transit-amplifying cells, are more lineage committed than stem cells, give rise to specialized cells, and can only replicate a limited number of times. Two populations of liver sinusoidal endothelial cell progenitor cells (SPCs) have been identified: BM SPCs and resident or intrahepatic SPCs. BM SPCs do not contribute to normal LSEC turnover, but are recruited to the liver after injury or partial hepatectomy (5, 33, 35). Resident SPCs are not derived from the bone marrow in the adult rodent (5). Resident SPCs and BM SPCs recruited to the liver are isolated along with mature LSECs, “contaminating” LSEC isolates (5). Marked variability exists in the frequency of resident SPCs in rodents, varying from 1% of all LSECs in Sprague-Dawley rats to 7% in Fischer rats (5). Within the liver, a putative resident LSEC stem cell has been identified based on its characteristics as a label-retaining cell. The definitive functional characteristics of self-renewal, lineage-specific differentiation, and serial repopulation have not been demonstrated, so this designation remains tenuous. However, the presence of a label-retaining cell with the surface markers of the resident SPC suggests that resident SPCs derive from this putative resident LSEC stem cell, especially given that resident SPCs do not come from the bone marrow in the adult rodent. In the Sprague-Dawley rat, 0.1% of all LSECs are putative resident LSEC stem cells (5). The 0.1% frequency of the putative resident LSEC stem cell is high when compared with the 0.01% frequency of hematopoietic stem cells among the nucleated cells in the bone marrow (36). Although the logical function for the resident LSEC stem cell and resident SPC would be to give rise to LSECs in normal turnover, such functionality has yet to be demonstrated.

Both resident and BM SPCs are positive for the progenitor cell marker CD133 and, like the LSEC, they express the endothelial cell marker CD31 and the hematopoietic cell marker CD45 (5). The resident SPC is positive for VEGFR1 and VEGFR2. While VEGFR expression in BM SPCs has not yet been examined, given that LSECs are positive for VEGFR1 and VEGFR2, BM SPCs may be as well. The resident SPC has a fenestration pattern that is indistinguishable from mature LSECs, whereas SPCs in the bone marrow are non-fenestrated but develop the normal LSEC fenestration pattern after recruitment to and engraftment in the liver (5). The presence of CD45 on resident and BM SPCs distinguishes them from the more generic endothelial progenitor cell (EPC) that is by definition CD45 negative.

After partial hepatectomy or toxic injury, proliferation of BM SPCs increases more than two-fold and mobilization of BM SPCs to the circulation increases two- to four-fold (5, 35). The number of LSECs of bone marrow origin increases over time: 25% of LSECs are bone marrow derived on day 3 after partial hepatectomy, whereas 40% and 70% of LSECs are bone marrow derived on days 5 and 14, respectively, after a toxic dose of dimethylnitrosamine (5, 35). Studies have ruled out fusion in LSECs after recruitment of the bone marrow–derived cells (33), so this result is true engraftment rather than fusion of a bone marrow cell with existing LSECs. BM SPCs develop fenestrae organized in sieve plates after engraftment in the liver (5, 35). After partial hepatectomy, BM SPCs that engraft in the liver proliferate much more than resident SPCs and are the major source of increased HGF in the LSEC fraction (5).

The contribution of BM SPCs to recovery from liver injury has also been demonstrated in two models of toxic hepatitis (33, 35). Studies in the monocrotaline-induced model of sinusoidal obstruction syndrome (SOS; also referred to as hepatic venoocclusive disease) have demonstrated that monocrotaline damages both LSECs (15, 20, 33, 39) and BM SPCs (33). During the recovery phase of injury, around 25% of LSECs are of bone marrow origin, demonstrating marked repair of LSECs by BM SPCs. However, at the height of sinusoidal denudation and centrilobular hemorrhagic necrosis, monocrotaline decreases the number of SPCs in the bone marrow by 50% and reduces the number of circulating BM SPCs by 95%. Bone marrow irradiation elicits severe SOS from a subtoxic dose of monocrotaline, whereas infusion of bone marrow completely prevents SOS in rats given a dose of monocrotaline that would otherwise cause severe SOS. Thus, repair of LSEC injury by BM SPCs is a key determinant of SOS. In other words, SOS is due to a combination of injury to LSECs and lack of repair by BM SPCs. Taken together with what we now know about the effect of BM SPCs on liver regeneration, diminished repair by BM SPCs in SOS will not only prevent repopulation of the denuded sinusoid, but also impair hepatocyte proliferation needed for liver regeneration. This likely explains the high case lethality in patients who develop SOS from high-dose myeloablative chemotherapy prior to hematopoietic cell transplantation (bone marrow transplantation). BM SPCs also repair LSEC injury after a toxic dose of dimethylnitrosamine, and infusion of BM SPC attenuates this injury (35). 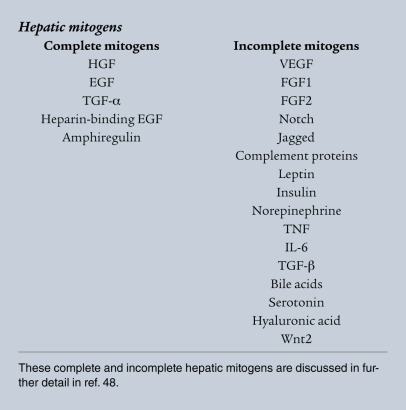 Although this Review focuses on HGF from LSECs and their progenitors, several sources of HGF may contribute to liver regeneration. Hepatic stellate cells have much higher HGF expression in normal liver than do other liver cells, but expression does not increase in the carbon tetrachloride model of liver injury (1). The increase in hepatic HGF that occurs within one hour of partial hepatectomy is attributed to release of HGF from pericellular and extracellular glycosaminoglycans (48). Because of the timing, stimulation of the first round of hepatocyte proliferation is attributed to this pool of HGF (48). Three hours after partial hepatectomy, HGF protein expression increases in the liver (49) and HGF gene expression is increased in lung (50), kidney, and spleen (51). The respective contributions of the various intrahepatic and extrahepatic HGF pools to liver regeneration remain to be defined.

Inhibitor of DNA binding 1 (Id1) is a dominant-negative helix-loop-helix protein that can form heterodimers with members of the basic HLD family of transcription factors. Id1 activates VEGF by enhancing the stability and activity of HIF-1α (52–54), and conversely the VEGF/VEGFR2 pathway may activate Id1 (4). Studies in Id1–/– mice have demonstrated impaired mobilization and recruitment of bone marrow EPCs, leading to impaired tumor angiogenesis and tumor growth (55). Liver regeneration after partial hepatectomy is impaired in Id1–/– mice (4), suggesting an impaired mobilization and recruitment of BM SPCs that is analogous to the EPC findings (4). Id1–/– mice have decreased expression of HGF and Wnt2 after partial hepatectomy (4), but it is unclear whether Id1 is a transcription factor for VEGF/VEGFR2-stimulated expression of Wnt2 and HGF or whether decreased hepatic expression of Wnt2 and HGF are solely due to decreased recruitment of BM SPCs expressing Wnt2 and HGF. While this study used an in vitro two-week co-culture model of hepatocytes with human liver endothelial cells to examine whether Id1 expression is required to stimulate hepatocyte proliferation (4), interpretation of these results is difficult, as LSECs only survive in standard co-culture for about 4 days.

EGF is a complete mitogen that is produced by duodenal Brunner’s glands (56); secretion of EGF into the portal circulation is thought to contribute to liver regeneration. Given that EPCs express EGF (57), EGF expression should also be examined in resident and BM SPCs. If EGF is abundantly expressed in SPCs, studies will need to examine the contribution of SPC-derived EGF in the promotion of liver regeneration.

The section above examines the role of hepatic VEGF in recruiting BM SPCs that express HGF and perhaps also Wnt2. However, in vitro studies with liver endothelial cells have demonstrated that VEGF stimulates production of HGF from isolated liver endothelial cells (presumably containing both LSECs and resident SPCs), which promotes hepatocyte proliferation in vitro (3). Whether the VEGF-induced increase in HGF in the in vitro studies comes from resident SPCs, mature LSECs, or both is not known (5). In addition, it is unclear whether the major reason for increased expression of HGF in the LSEC fraction after liver injury is due to hepatic VEGF-stimulated recruitment of BM SPCs that highly express HGF, high hepatic VEGF expression that stimulates expression of HGF in engrafted BM SPCs, or a combination of both.

BM SPCs are recruited to the liver after partial hepatectomy and toxic liver injury. Recruitment of BM SPCs to the liver is essential for hepatocyte proliferation and restoration of liver weight in these models. BM SPCs are the major source of increased HGF in the LSEC fraction. However, HGF may not account for the essential contribution of BM SPCs, given that there are other sources of increased intrahepatic and extrahepatic HGF after injury. Although HGF from BM SPCs is probably important, future studies will need to define why BM SPC recruitment is essential for liver regeneration.

The VEGF/VEGFR2 pathway is essential for liver regeneration. Id1 is an essential transcription factor in this pathway, but its role needs further definition. VEGF is a central regulator of BM SPC recruitment: the increase in hepatic VEGF after injury leads to proliferation of BM SPCs, mobilization of BM SPCs to the circulation, engraftment in the liver, and differentiation of BM SPCs to LSECs. VEGF also stimulates increased HGF expression in the cells of the LSEC fraction, i.e., mature LSECs and/or the LSEC progenitors.

This work was supported by NIH grant DK46357.