The development of broadly neutralizing antibodies (BNAbs) in HIV infection is a result of long-term coevolutionary interaction between viruses and antibodies. Understanding how this interaction promotes the increase of neutralization breadth during infection will improve the way in which AIDS vaccine strategies are designed. In this paper, we used SIV-infected rhesus macaques as a model to study the development of neutralization breadth by infecting rhesus macaques with longitudinal NAb escape variants and evaluating the kinetics of NAb response and viral evolution. We found that the infected macaques developed a stepwise NAb response against escape variants and increased neutralization breadth during the course of infection. Furthermore, the increase of neutralization breadth correlated with the duration of infection but was independent of properties of the inoculum, viral loads, or viral diversity during infection. These results imply that the duration of infection was the main factor driving the development of BNAbs. These data suggest the importance of novel immunization strategies to induce effective NAb response against HIV infection by mimicking long-term infection. 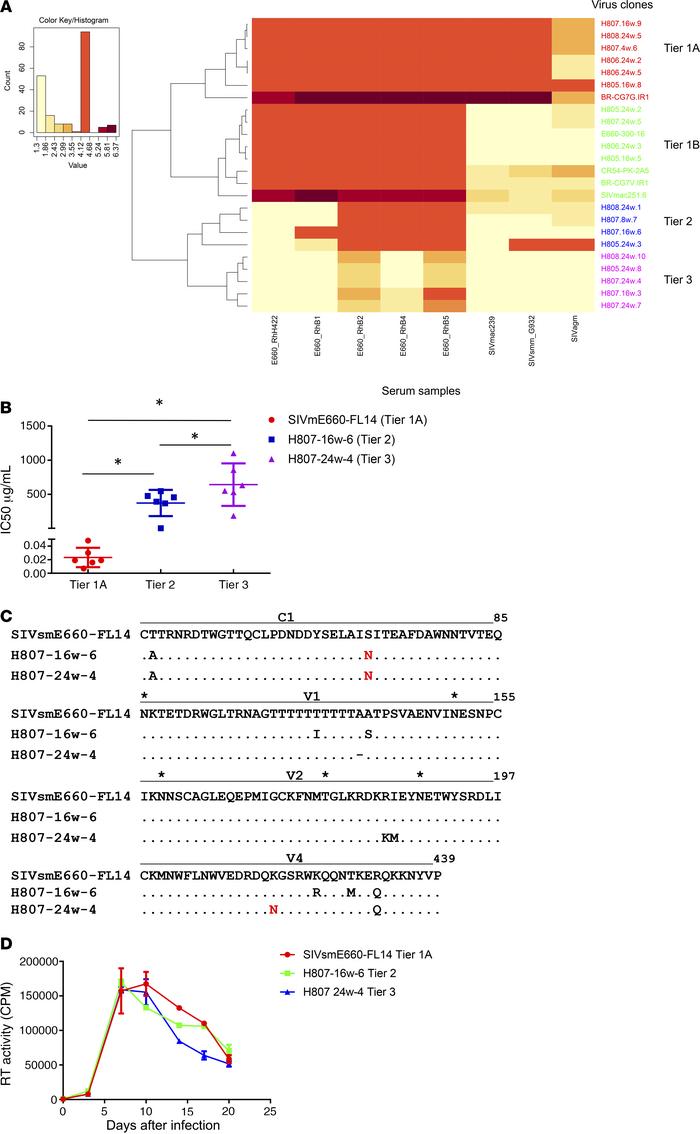 () Tiered categorization of neutralization sensitivity of SIVsmE660 variants. A heatmap was generated based on log10 values of IC50 titers and was analyzed by hierarchical clustering. The SIVsmE660 variants clustered into 4 subgroups based on their similarity in neutralization sensitivity: tier 1A (highly sensitive), tier 1B (sensitive), tier 2 (moderately resistant), and tier 3 (resistant). () Neutralization sensitivity of the 3 representative clones. The 3 clones were evaluated in TZM-bl neutralization assay using 6 purified polyclonal immunoglobulins from rhesus macaques chronically infected with uncloned SIVsmE660. IC50 titers are shown as dot plots and median IC50 with 95% CI are shown for each group ( = 6). Significant differences were observed between the 3 clones ( < 0.05, 1-way ANOVA). () Alignment of Env amino acid sequences of the 3 representative SIVsmE660 variants: SIVsmE660-FL14 (tier 1A), H807-16w-6 (tier 2), and H807-24w-4 (tier 3). Identical amino acids are shown as a dot (.), deletions are shown as a dash (–). Amino acid substitutions are shown. Potential glycosylation sites are indicated with an asterisk (*). Only domains with sequence differences are shown. () Replication of the 3 clones in rhesus PBMCs. PHA-stimulated rhesus PBMCs were infected with the 3 clones at an MOI of 0.001. Virus production was quantified and shown as reverse transcriptase values in supernatants collected at 3-day intervals. The experiment was performed in duplicate, and median values with 95% CI are shown. Similar virus replication was observed in PBMCs from 2 separate macaques, and the results in a representative macaque are shown. No significant difference was observed between the replication of the 3 clones ( > 0.05, 2-way ANOVA).