A neuron under attack 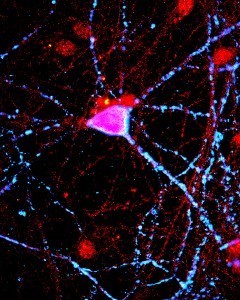 Cultured hippocampal neurons are stained for phosphorylated IRS-1 (red) and Aβ oligomers (AβOs, blue). AβOs are diffusible synaptotoxins that accumulate in the brains of Alzheimer disease (AD) patients. Here, a neuron with high level of phorphorylated IRS-1 is under attack by AβOs. A connection between AD and diabetes has been suggested, but the mechanism that underlies this link is unclear. In this article, Bomfim et al. describe evidence of dysregulated insulin signaling in the brains of AD patients and animal models, and suggest that anti-diabetic medications might have efficacy in treating the cognitive deficits associated with AD.

Defective brain insulin signaling has been suggested to contribute to the cognitive deficits in patients with Alzheimer’s disease (AD). Although a connection between AD and diabetes has been suggested, a major unknown is the mechanism(s) by which insulin resistance in the brain arises in individuals with AD. Here, we show that serine phosphorylation of IRS-1 (IRS-1pSer) is common to both diseases. Brain tissue from humans with AD had elevated levels of IRS-1pSer and activated JNK, analogous to what occurs in peripheral tissue in patients with diabetes. We found that amyloid-β peptide (Aβ) oligomers, synaptotoxins that accumulate in the brains of AD patients, activated the JNK/TNF-α pathway, induced IRS-1 phosphorylation at multiple serine residues, and inhibited physiological IRS-1pTyr in mature cultured hippocampal neurons. Impaired IRS-1 signaling was also present in the hippocampi of Tg mice with a brain condition that models AD. Importantly, intracerebroventricular injection of Aβ oligomers triggered hippocampal IRS-1pSer and JNK activation in cynomolgus monkeys. The oligomer-induced neuronal pathologies observed in vitro, including impaired axonal transport, were prevented by exposure to exendin-4 (exenatide), an anti-diabetes agent. In Tg mice, exendin-4 decreased levels of hippocampal IRS-1pSer and activated JNK and improved behavioral measures of cognition. By establishing molecular links between the dysregulated insulin signaling in AD and diabetes, our results open avenues for the investigation of new therapeutics in AD.