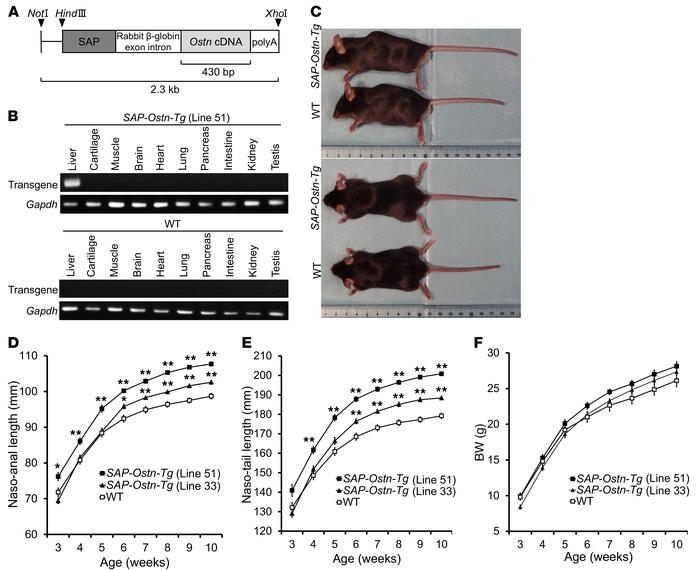 () Structure of the transgene. Arrowheads indicate the recognition sites of restriction endonucleases. SAP, human SAP promoter. () Expression of the transgene in tissues of WT and line 51 mice analyzed by RT-PCR. Transgene expression was detected only in the liver of mice. () Gross appearance of WT and male mice at the age of 10 weeks observed from the left side (top panel) and above (bottom panel). mice showed longer bodies, limbs, and tails than WT mice. (–) Growth curves based on naso-anal length (), naso-tail length (), and body weight () of WT (open squares), line 33 (filled triangles), and line 51 (filled squares) male mice measured every week from the ages of 3 to 10 weeks. Body lengths of mice became significantly larger than those of WT mice, and the body elongation of mice increased in accordance with blood OSTN levels. There was no significant difference in body weight between the 3 groups throughout the observation period. = 10 each. * < 0.05, ** < 0.01 vs. WT mice, by 1-way ANOVA followed by Tukey-Kramer test. Data are representative of 2 independent experiments ().