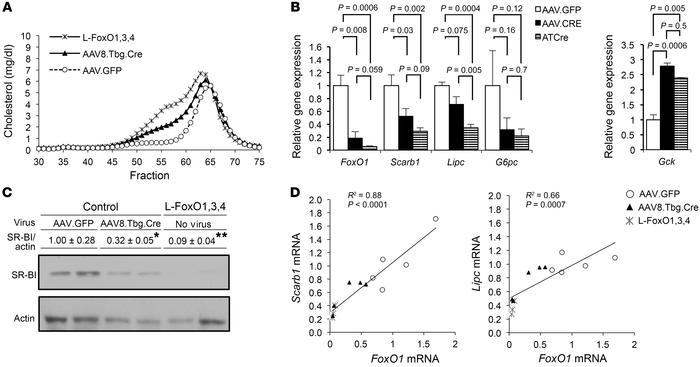 (–) Chow-fed, adult , , and control mice transduced with adeno-associated virus (serotype 8) expressing Cre recombinase driven by the hepatocyte-specific Tbg promoter (AAV8.Tbg.Cre) or control virus (AAV.GFP) ( = 5). For comparison, we also included a group of traditional L-FoxO1,3,4–knockout mice that were not transduced with virus, but rather had FoxO deficiency since birth ( = 4). Four weeks after virus transduction, mice were fasted for five hours, and then plasma and livers were collected. () Cholesterol levels in plasma fractionated by FPLC 4 weeks after virus transduction. () Relative hepatic gene expression by qPCR. () Representative Western blot of hepatic SR-BI expression. SR-BI/actin denotes relative SR-BI expression levels by densitometric scanning. * < 0.05 and ** < 0.01 versus AAV.GFP mice. No significant difference was detected between AAV8.Tbg.Cre mice and L-FoxO1,3,4 mice. () Correlation between or mRNA and mRNA. The values in and were calculated by 1-way ANOVA, followed by a post hoc test using the pooled SD, without Bonferroni’s correction. Data are presented as the mean ± SEM.