Lymphatic endothelial cells are a replicative niche for Mycobacterium tuberculosis

Lymphatic endothelial cells are a replicative niche for Mycobacterium tuberculosis

In extrapulmonary tuberculosis, the most common site of infection is within the lymphatic system, and there is growing recognition that lymphatic endothelial cells (LECs) are involved in immune function. Here, we identified LECs, which line the lymphatic vessels, as a niche for Mycobacterium tuberculosis in the lymph nodes of patients with tuberculosis. In cultured primary human LECs (hLECs), we determined that M. tuberculosis replicates both in the cytosol and within autophagosomes, but the bacteria failed to replicate when the virulence locus RD1 was deleted. Activation by IFN-γ induced a cell-autonomous response in hLECs via autophagy and NO production that restricted M. tuberculosis growth. Thus, depending on the activation status of LECs, autophagy can both promote and restrict replication. Together, these findings reveal a previously unrecognized role for hLECs and autophagy in tuberculosis pathogenesis and suggest that hLECs are a potential niche for M. tuberculosis that allows establishment of persistent infection in lymph nodes. 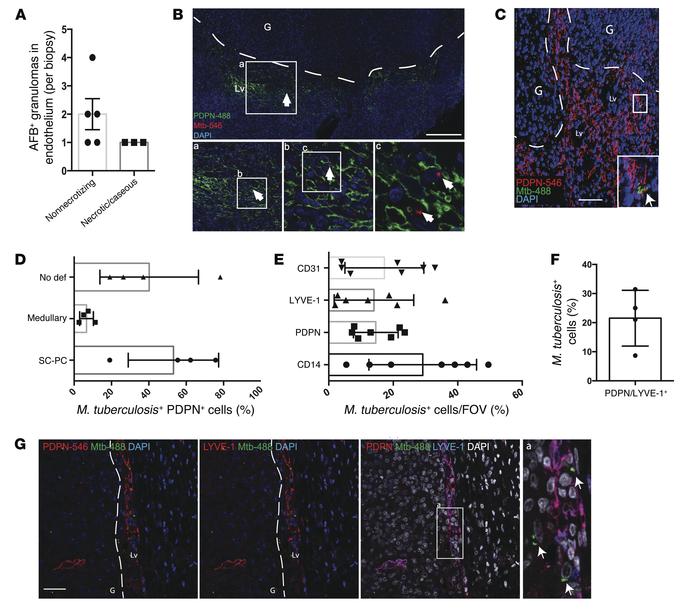 () The number and type of human lymph node granulomas that have AFB present within endothelial cells. Each symbol represents one biopsy. Within the 5 biopsies, there were 34 granulomas analyzed in total; 13 were positive for AFB within endothelial cells, and 21 were negative (all 21 were from 2 biopsies). () Representative histological sections from human patients after lymph node tissue resection surgery were stained for PDPN, . , and nuclei (DAPI). Dashed line represents the border of the granuloma (G). Scale bar: 1 mm. Original magnification, ×5 (bottom left); ×3 (bottom middle and right). Sequential zooms of the top image are shown. Arrows point to examples of . –infected cells. () VolumeJ 3D rendering of a tissue section of a human lymph node. Two granulomas are visible, with the dashed line representing their borders. The section was stained for PDPN–Alexa Fluor 546 (PDPN-546), . –Alexa Fluor 488 (Mtb-488), and nuclei (DAPI). Lv, lymphatic vessels. Scale bar: 40 μm. Original magnification, ×10 (inset). () Semiquantitative analysis of the anatomical localization of the LECs positive for . . SC-PC, subcapsular/paracortical; no def, not defined. () Quantitative analysis of the percentage of infected cells per field of view (FOV) for CD14 (myelocytic cells) and PDPN, LYVE-1, and CD31 (lymphatic and vascular endothelial cells). Seven lymph node samples were analyzed. () Quantitative analysis of the percentage of PDPN+/LYVE-1+ cells positive for . . () Representative images showing PDPN+/LYVE-1+ cells containing . (white arrows). Scale bar: 40 μm. Original magnification, ×17 (inset).