Activating EGFR mutations occur in human non–small cell lung cancer (NSCLC), with 5% of human lung squamous cell carcinomas having EGFRvIII mutations and approximately 10%–30% of lung adenocarcinomas having EGFR kinase domain mutations. An EGFR-targeting monoclonal antibody, mAb806, recognizes a conformational epitope of WT EGFR as well as the truncated EGFRvIII mutant. To explore the anticancer spectrum of this antibody for EGFR targeted cancer therapy, mAb806 was used to treat genetically engineered mice with lung tumors that were driven by either EGFRvIII or EGFR kinase domain mutations. Our results demonstrate that mAb806 is remarkably effective in blocking EGFRvIII signaling and inducing tumor cell apoptosis, resulting in dramatic tumor regression in the EGFRvIII-driven murine lung cancers. Another EGFR-targeting antibody, cetuximab, failed to show activity in these lung tumors. Furthermore, treatment of murine lung tumors driven by the EGFR kinase domain mutation with mAb806 also induced significant tumor regression, albeit to a less degree than that observed in EGFRvIII-driven tumors. Taken together, these data support the hypothesis that mAb806 may lead to significant advancements in the treatment of the population of NSCLC patients with these 2 classes of EGFR mutations.

Murine lung tumors driven by EGFRvIII expression are sensitive to mAb806 and ch806 antibody treatment but resistant to cetuximab treatment. 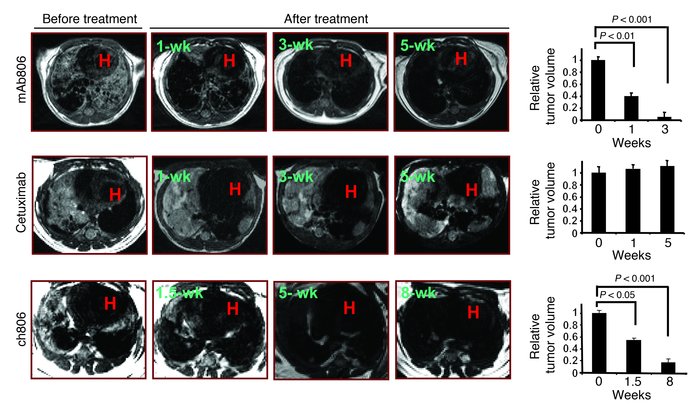 , mice were treated with either mAb806 or ch806 at 0.5 mg per dose or cetuximab at 1 mg per dose through daily i.p. injection. Antibodies were given every 2 days at the same dose after the first week of treatment. Serial MRI was performed at the indicated time points, and corresponding sections of representative mice in each treatment group are shown. Data (expressed as mean ± SD) illustrate the tumor regression measured by MRI, and statistical analyses were performed using 2-tailed unpaired Student’s test. All mice were kept on a doxycycline diet throughout the experiment. H indicates the area of the heart.