T cell activation levels in HIV infection are predictive of AIDS progression. We searched for the immunological correlates of protection against disease progression by studying the early stages of nonpathogenic SIV infection in African green monkeys (SIVagm). The African green monkeys (AGMs) displayed high peak viremias and a transient decline in levels of blood CD4+ and CD8+ T cells between days 5 and 17 after infection. A concomitant increase in levels of CD4+DR+, CD8+DR+, and CD8+CD28– cells was detected. After the third week, T cell activation returned to baseline levels, which suggested a protective downregulation of T cell activation. A very early (24 hours after infection) and strong induction of TGF-β1 and FoxP3 expression was detected and correlated with increases in levels of CD4+CD25+ and CD8+CD25+ T cells. This was followed by a significant increase in levels of IL-10, whereas IFN-γ gene upregulation was more transient, and levels of TNF-α and MIP-1α/β transcripts did not increase in either blood or tissues. The profiles were significantly different during primary SIV infection in macaques (SIVmac); that is, there was a delayed increase in IL-10 levels accompanied by moderate and persistent increases in TGF-β levels. Together, our data show that SIVagm infection is associated with an immediate antiinflammatory environment and suggest that TGF-β may participate in the generation of Tregs, which may prevent an aberrant chronic T cell hyperactivation. 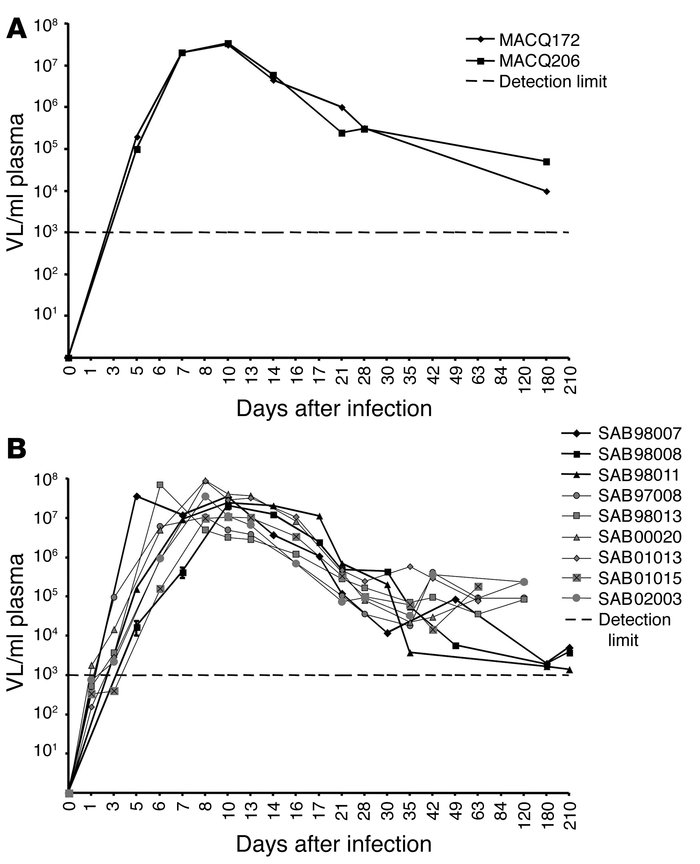