Large amounts of calcium are transferred to offspring by milk. This demand results in negative calcium balance in lactating mothers and is associated with rapid bone loss. The mechanisms of bone loss during lactation are only partly understood. Several studies have suggested that parathyroid hormone–related protein (PTHrP) might be secreted into the circulation by the lactating mammary gland and regulate bone turnover during lactation. Because mammary development fails in the absence of PTHrP, conventional PTHrP knockout mice cannot be used to address this possibility. To examine this hypothesis, we therefore used mice carrying a β-lactoglobulin promoter-driven Cre transgene, one null PTHrP allele, and one floxed PTHrP allele. Expression of Cre specifically in mammary epithelial cells during late pregnancy and lactation resulted in efficient deletion of the PTHrP gene; mammary gland PTHrP mRNA and milk PTHrP protein were almost completely absent. Removal of PTHrP from the lactating mammary glands resulted in reductions in levels of circulating PTHrP and 1,25-dihydroxy vitamin D and urinary cAMP. In addition, bone turnover was reduced and bone loss during lactation was attenuated. We conclude that during lactation mammary epithelial cells are a source of circulating PTHrP that promotes bone loss by increasing rates of bone resorption. 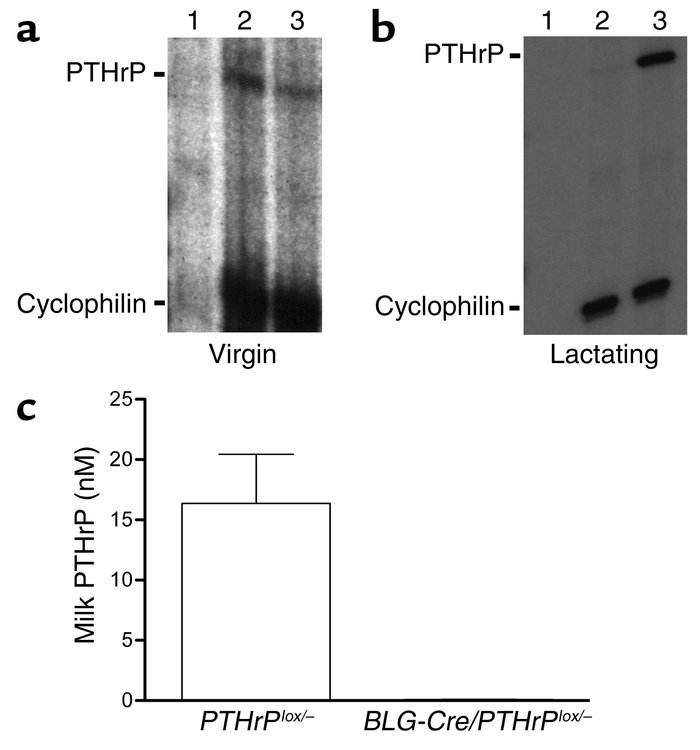 () Ribonuclease protection analysis of PTHrP and cyclophilin transcripts in RNA from yeast (lane 1) and mammary glands from virgin (lane 2) and (lane 3) mice shows that PTHrP is normally expressed at low levels; therefore significant recombination has not yet taken place. () Ribonuclease protection of PTHrP and cyclophilin in RNA from mammary glands of lactating (lane 2) and (lane 3) mice. Yeast RNA (lane 1) was a negative control. The efficiency of BLG-Cre–mediated recombination is highlighted by the essentially complete lack of PTHrP RNA in the mammary glands. () PTHrP protein was undetectable (12 of 14) or drastically reduced (2 of 14) in milk from mice (mean 0.06 ± 0.04 nM, = 14) compared with littermate controls (16.4 ± 4.1 nM, = 9) as a result of the mammary-specific targeting of gene deletion.