Proliferation of CD4+ T cells harboring HIV-1 proviruses is a major contributor to viral persistence in people on antiretroviral therapy (ART). To determine whether differential rates of clonal proliferation or HIV-1–specific cytotoxic T lymphocyte (CTL) pressure shape the provirus landscape, we performed an intact proviral DNA assay (IPDA) and obtained 661 near–full-length provirus sequences from 8 individuals with suppressed viral loads on ART at time points 7 years apart. We observed slow decay of intact proviruses but no changes in the proportions of various types of defective proviruses. The proportion of intact proviruses in expanded clones was similar to that of defective proviruses in clones. Intact proviruses observed in clones did not have more escaped CTL epitopes than intact proviruses observed as singlets. Concordantly, total proviruses at later time points or observed in clones were not enriched in escaped or unrecognized epitopes. Three individuals with natural control of HIV-1 infection (controllers) on ART, included because controllers have strong HIV-1–specific CTL responses, had a smaller proportion of intact proviruses but a distribution of defective provirus types and escaped or unrecognized epitopes similar to that of the other individuals. This work suggests that CTL selection does not significantly check clonal proliferation of infected cells or greatly alter the provirus landscape in people on ART. 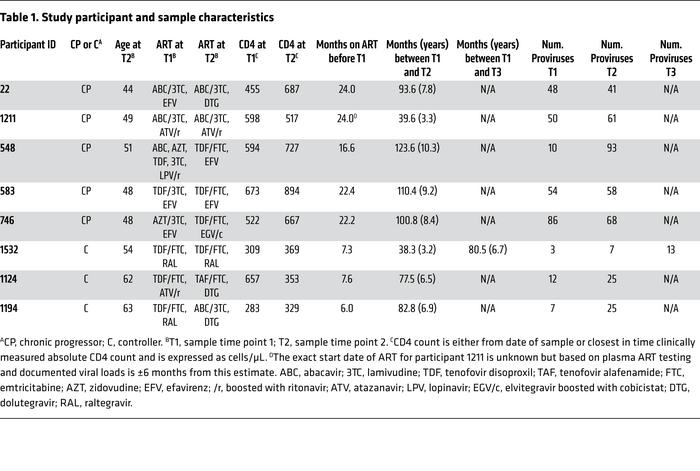