Granzyme B is required for development of AAD in predisposed pups. 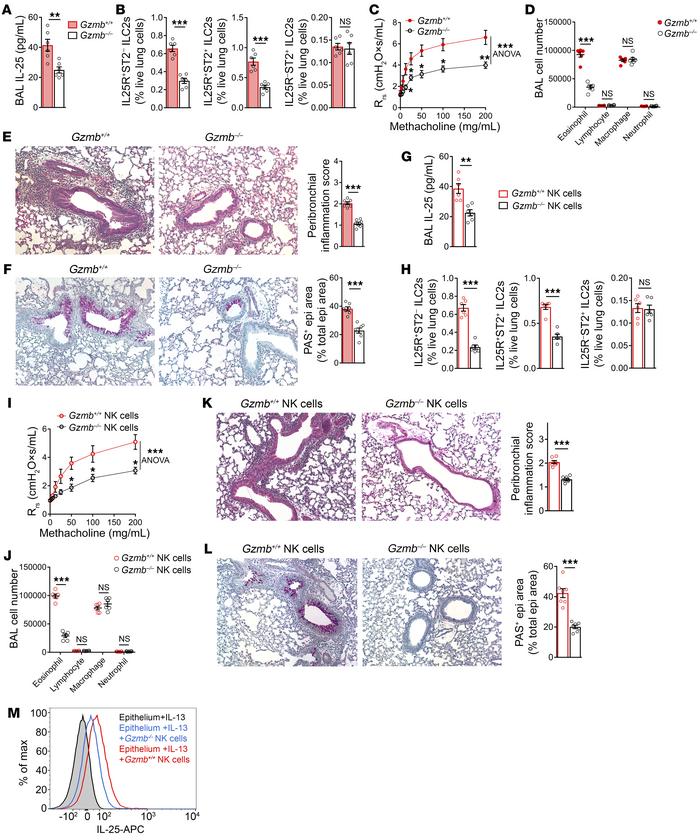 (–) Importance of systemic granzyme B. DEP-exposed females were mated with unexposed males to generate and littermates. Pups were immunized, challenged with OVA, and analyzed 72 hours after challenge. (–) Importance of NK cell–expressed granzyme B. pups were transferred with and NK cells. Donor and recipients were the same age and were born to DEP-exposed mothers. Cell transfer took place on day 22 as in . Before cell transfer, on postnatal day 5, donor and prospective recipient pups were immunized with OVA/alum. After cell transfer, recipients were challenged with OVA on days 23 to 25 and analyzed on day 28 (diagram of experimental strategy in ). ( and ) Concentration of IL-25 in BAL fluid. = 6 mice per group. ( and ) Percentages of IL25R+ST2– ILC2s, IL25R+ST2+ ILC2s, and IL25R–ST2+ ILC2s in live lung cells. = 6. ( and ) Total lung resistance to methacholine. = 6. ( and ) Leukocyte subset counts in BAL fluid. = 6. ( and ) Left: H&E-stained lung sections. Original magnification, ×100. Right: peribronchial inflammation scores. = 7. ( and ) Left: PAS-stained lung sections. Original magnification, ×100. Right: proportions of bronchial epithelial cell areas that are PAS+. = 7. () Flow cytometric detection of IL-25 in EpCAM+NK1.1– airway epithelial cells that were incubated with IL-13 ± NK cells from spleens of DEP-OVA and pups. Histogram is representative of 3 independent cocultures. Data are representative of 3 independent experiments and are shown as mean ± SEM. * < 0.05; ** < 0.01; *** < 0.001, 2-tailed unpaired test (, , –, and –); 2-way repeated-measures ANOVA with Bonferroni’s post hoc test ( and ).