Streptococcus pneumoniae (Spn) is a common cause of respiratory infection, but also frequently colonizes the nasopharynx in the absence of disease. We used mass cytometry to study immune cells from nasal biopsy samples collected following experimental human pneumococcal challenge in order to identify immunological mechanisms of control of Spn colonization. Using 37 markers, we characterized 293 nasal immune cell clusters, of which 7 were associated with Spn colonization. B cell and CD161+CD8+ T cell clusters were significantly lower in colonized than in noncolonized subjects. By following a second cohort before and after pneumococcal challenge we observed that B cells were depleted from the nasal mucosa upon Spn colonization. This associated with an expansion of Spn polysaccharide–specific and total plasmablasts in blood. Moreover, increased responses of blood mucosa-associated invariant T (MAIT) cells against in vitro stimulation with pneumococcus prior to challenge associated with protection against establishment of Spn colonization and with increased mucosal MAIT cell populations. These results implicate MAIT cells in the protection against pneumococcal colonization and demonstrate that colonization affects mucosal and circulating B cell populations. 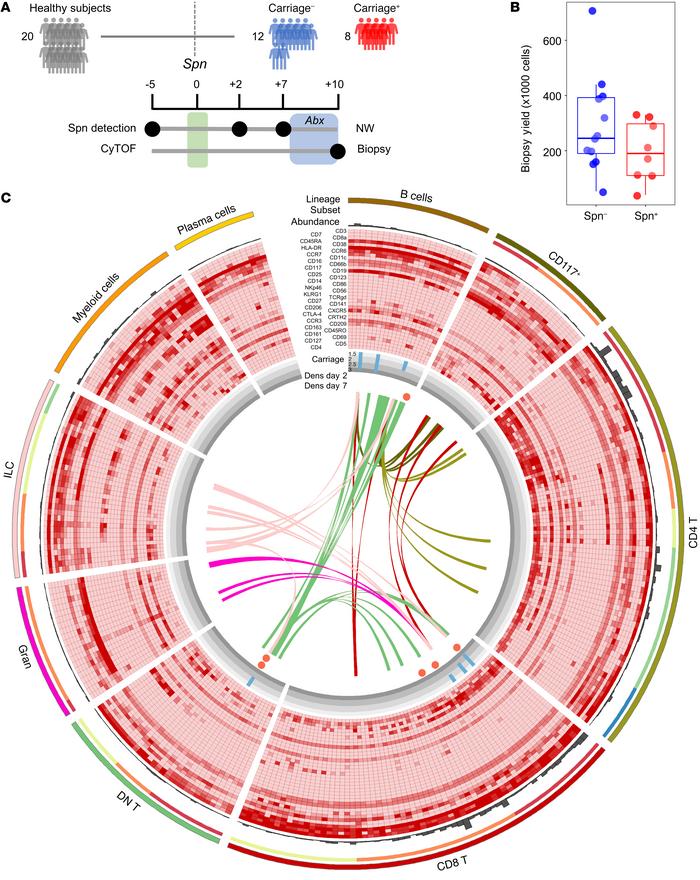 () Study design showing pneumococcal inoculation (green bar) and sample collection. Subjects who acquired pneumococcus following challenge are depicted in red ( = 8), while those protected are depicted in blue ( = 12). Antibiotics (Abx) were administered in the 3 days leading up to biopsy collection (blue area). NW, nasal wash. () Viable cell yield following enzymatic biopsy digestion for the 20 biopsies collected for CyTOF. Individual samples and box plots, depicting median and interquartile ranges, with whiskers extending to 1.5× interquartile range or maximum value, are shown. () Circle diagram showing all 293 defined clusters within 9 lineages and 22 subpopulations. From outside in: Number of cells in each cluster is depicted by gray bars. Relative expression for 36 markers is shown with red depicting higher expression (CD45 and Epcam are not depicted). Association with carriage state is shown, where blue bars depict the fold-change of the median of normalized abundance in carriage– subjects over carriage+ subjects (Mann-Whitney test, < 0.05 shown only). Significant correlations between Spn density on either day 2 or day 7 with normalized abundance are depicted by circles, with red indicating a negative association. Spearman’s correlation analyses were performed with all subjects, where carriage– subjects were included with a density of 0. Ribbons connect highly correlated ( > 0.70) clusters that were associated with Spn carriage status not belonging to the same lineage, with color indicating the lineage of origin. DN T, double-negative T cells; Gran, granulocytes; ILC, innate lymphoid cells.