Iron deficiency is common worldwide and is associated with adverse pregnancy outcomes. The increasing prevalence of indiscriminate iron supplementation during pregnancy also raises concerns about the potential adverse effects of iron excess. We examined how maternal iron status affects the delivery of iron to the placenta and fetus. Using mouse models, we documented maternal homeostatic mechanisms that protect the placenta and fetus from maternal iron excess. We determined that under physiological conditions or in iron deficiency, fetal and placental hepcidin did not regulate fetal iron endowment. With maternal iron deficiency, critical transporters mediating placental iron uptake (transferrin receptor 1 [TFR1]) and export (ferroportin [FPN]) were strongly regulated. In mice, not only was TFR1 increased, but FPN was surprisingly decreased to preserve placental iron in the face of fetal iron deficiency. In human placentas from pregnancies with mild iron deficiency, TFR1 was increased, but there was no change in FPN. However, induction of more severe iron deficiency in human trophoblast in vitro resulted in the regulation of both TFR1 and FPN, similar to what was observed in the mouse model. This placental adaptation that prioritizes placental iron is mediated by iron regulatory protein 1 (IRP1) and is important for the maintenance of mitochondrial respiration, thus ultimately protecting the fetus from the potentially dire consequences of generalized placental dysfunction. 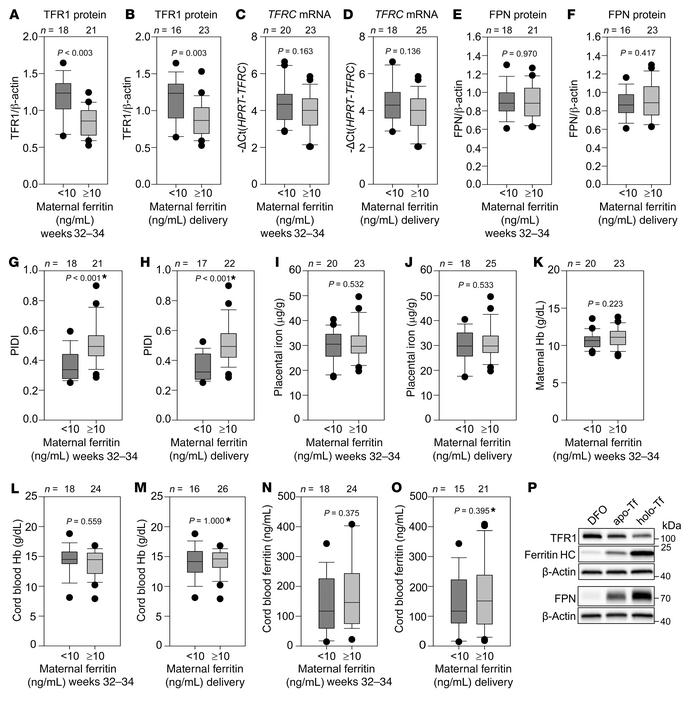 Placentas from uncomplicated human pregnancies were analyzed by Western blotting to determine protein expression of TFR1 and FPN, normalized to β-actin. qPCR was performed to determine mRNA expression, normalized to . ( and ) TFR1 protein levels, ( and ) mRNA levels, and ( and ) FPN protein levels according to maternal ferritin during weeks 32–34 or at delivery. ( and ) The PIDI was calculated as the ratio of expression of placental FPN to TFR1 protein, with a lower PIDI reflecting pregnancies at increased risk of fetal iron deficiency. The PIDI was lower in pregnant women with serum ferritin levels below 10 ng/mL than in those with ferritin levels above 10 ng/mL, regardless of whether ferritin was measured at 32–34 weeks of pregnancy or at delivery. No difference between <10 ng/mL and >10 ng/mL ferritin groups was observed for ( and ) placental nonheme iron concentrations, () maternal Hb, ( and ) cord blood Hb, or ( and ) cord blood ferritin. () PHTs were treated with 100 μM DFO, apo-Tf or holo-Tf for 24 hours. TFR1, FPN, ferritin heavy chain (HC), and β-actin expression was assessed by Western blotting. Statistical differences between groups was determined by 2-tailed Student’s test or Mann-Whitney rank-sum test for non-normally distributed values (denoted by an asterisk after the value). The numbers of animals are indicated above the box and whisker plots.