Experimental autoimmune encephalomyelitis (EAE) is an inflammatory demyelinating disease of the central nervous system (CNS), induced by the adoptive transfer of myelin-reactive CD4+ T cells into naive syngeneic mice. It is widely used as a rodent model of multiple sclerosis (MS). The development of EAE lesions is initiated when transferred CD4+ T cells access the CNS and are reactivated by local antigen-presenting cells (APCs) bearing endogenous myelin peptide/MHC class II complexes. The identity of the CNS-resident, lesion-initiating APCs is widely debated. Here we demonstrate that classical dendritic cells (cDCs) normally reside in the meninges, brain, and spinal cord in the steady state. These cells are unique among candidate CNS APCs in their ability to stimulate naive, as well as effector, myelin-specific T cells to proliferate and produce proinflammatory cytokines directly ex vivo. cDCs expanded in the meninges and CNS parenchyma in association with disease progression. Selective depletion of cDCs led to a decrease in the number of myelin-primed donor T cells in the CNS and reduced the incidence of clinical EAE by half. Based on our findings, we propose that cDCs, and the factors that regulate them, be further investigated as potential therapeutic targets in MS. 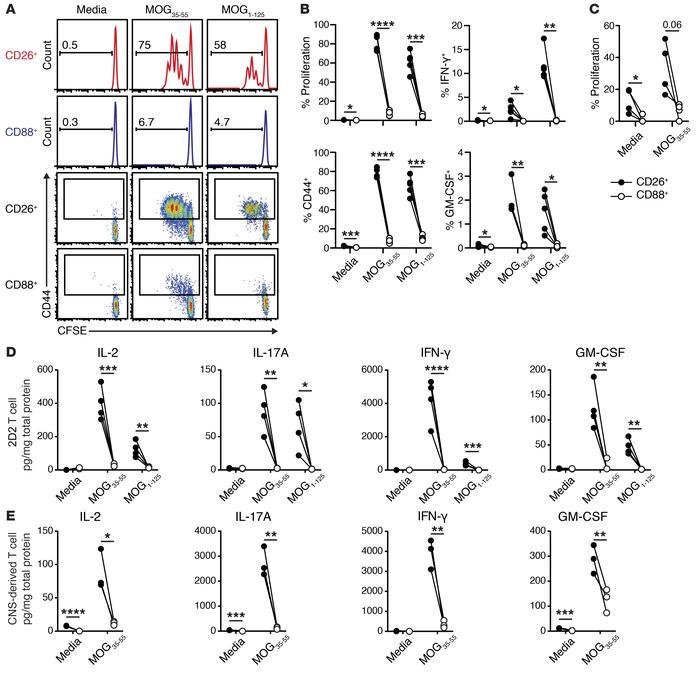 EAE was induced by active immunization with MOG35–55 peptide in CFA. CNS mononuclear cells were harvested at peak disease. CD26+ or CD88+ DC subsets (CD45+MHCII+CD11c+) were purified by FACS and cocultured with MOG-reactive T cells in the presence or absence of myelin peptide (MOG35–55) or myelin protein (MOG1–125). (, , and ) The CNS DC subsets were cocultured with CD44–CD62L+ CD4+ T cells that had been isolated from the spleens and lymph nodes of naive 2D2 TCR-transgenic mice. ( and ) T cell proliferation was measured by CFSE dilution. The percentage of CD4+ T cells that underwent 1 or more division, or that expressed the activation marker CD44, is shown for each group. () Cytokine production was measured by intracellular flow cytometry. The percentage of cytokine producers among total CD4+ T cells is shown. () Cytokine levels were measured in culture supernatants via a multiplex Luminex bead-based assay. ( and ) CNS DC subsets were cocultured with CD4+ T cells isolated from the CNS at the peak of EAE. () T cell proliferation was measured as in . () Cytokine levels were measured in culture supernatants via Luminex. (–) Each circle represents a data point generated with CNS DC subsets isolated from a single mouse. Connected circles indicate paired samples from the same mouse. * < 0.05, ** < 0.01, *** < 0.001, **** < 0.0001 by paired, 2-tailed Student’s test. Data in , , and , and in and , are from individual experiments that are representative of 2–4 independent experiments with similar results. = 3–5 mice per group per experiment.