Hormone therapy (HT) is reported to be deficient in improving learning and memory in older postmenopausal women according to recent clinical studies; however, the reason for failure is unknown. A “window of opportunity” for estrogen treatment is proposed to explain this deficiency. Here, we found that facilitation of memory extinction and long-term depression by 17β-estradiol (E2) was normal in mice 1 week after ovariectomy (OVXST), but it was impaired in mice 3 months after ovariectomy (OVXLT). High-throughput sequencing revealed a decrease of miR-221-5p, which promoted cannabinoid receptor 1 (CB1) ubiquitination by upregulation of Neurl1a/b in E2-treated OVXLT mice. Blood samples from postmenopausal women aged 56–65 indicated decreases of miR-221-5p and 2-arachidonoylglycerol compared with samples from perimenopausal women aged 46–55. Replenishing of miR-221-5p or treatment with a CB1 agonist rescued the impairment of fear extinction in E2-treated OVXLT mice. The present study demonstrates that an HT time window in mice can be prolonged by cotreatment with a CB1 agonist, implying a potential strategy for HT in long-term menopausal women. 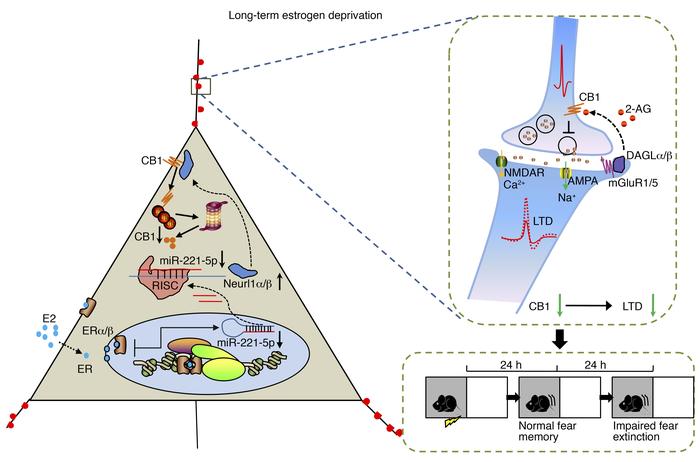