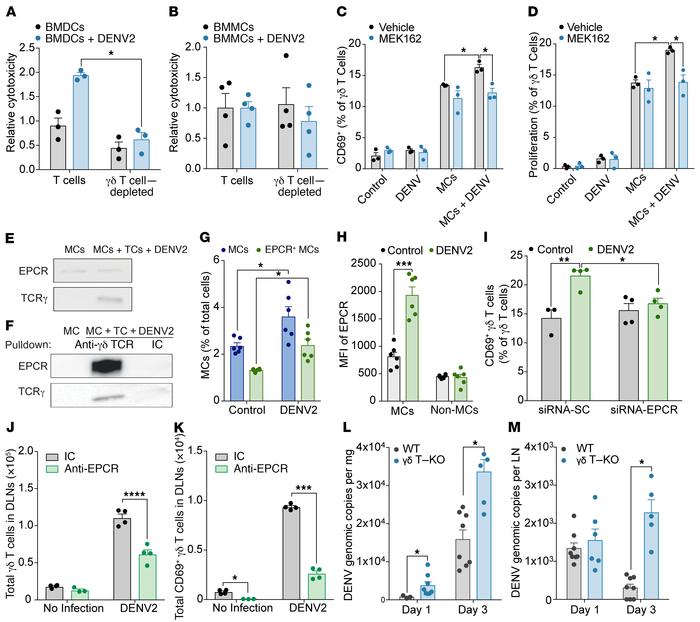 Total T cells or T cells depleted of γδ T cells from DENV-infected LNs, 72 hours after infection, were cocultured with () BMDCs or () BMMCs that were preinfected with DENV (MOI = 1). Cytotoxicity was measured by LDH assay and normalized to the control. BMDCs, but not BMMCs, showed cytotoxicity, which was lost with γδ T cell depletion. ( and ) CFSE-labeled T cells purified from naive mice were cocultured with BMMCs with or without DENV and with or without MEK162. MEK162 inhibited DENV-specific γδ T cell () activation and () proliferation, as measured by flow cytometry at 96 hours. () Lysates from cocultures of DENV-exposed MCs and T cells (TCs) or control MCs were probed for EPCR by Western blotting. γδ TCR was only detected in lysates containing T cells. () Pulldown of the γδ TCR showed interaction with EPCR, as detected by Western blotting. Pulldown was confirmed by detection of the γTCR subunit. In contrast, pulldown using an isotype control (IC) antibody did not precipitate γδ TCR or EPCR. Increases in () MCs expressing EPCR and () expression of EPCR on MCs in LNs was observed 24 hours after infection. Representative flow cytometric plots are provided in . () γδ T cells were activated by DENV-exposed MCs transfected with scrambled control siRNA, which was blocked by knockdown of EPCR in MCs. Blocking EPCR in vivo by injection of blocking antibody limited () accumulation and () activation of γδ T cells in DLNs following DENV infection. ( and ) WT and γδ T cell–KO (γδ T–KO) mice were infected with DENV2 via FP injection, and DENV genomic copies were quantified in the FPs and DLNs 24 hours and 72 hours after infection. γδ T cell–KO mice had higher viral loads in the () FPs and () DLNs. Data represent the mean ± SEM. * < 0.05, ** < 0.01, ***P < 0.001 , and **** < 0.0001, by 2-way ANOVA with Sidak’s multiple comparisons test. = 4–6 mice per group. (See complete unedited blots in the supplemental material.)