The agonistic/antagonistic biocharacter of selective estrogen receptor modulators (SERMs) can have therapeutic advantages, particularly in the case of premenopausal breast cancers. Although the contradictory effects of these modulators have been studied in terms of crosstalk between the estrogen receptor α (ER) and coactivator dynamics and growth factor signaling, the molecular basis of these mechanisms is still obscure. We identify a series of regulatory mechanisms controlling cofactor dynamics on ER and SERM function, whose activities require F-box protein 22 (Fbxo22). Skp1, Cullin1, F-box–containing complex (SCFFbxo22) ubiquitylated lysine demethylase 4B (KDM4B) complexed with tamoxifen-bound (TAM-bound) ER, whose degradation released steroid receptor coactivator (SRC) from ER. Depletion of Fbxo22 resulted in ER-dependent transcriptional activation via transactivation function 1 (AF1) function, even in the presence of SERMs. In living cells, TAM released SRC and KDM4B from ER in a Fbxo22-dependent manner. SRC release by TAM required Fbxo22 on almost all ER-SRC–bound enhancers and promoters. TAM failed to prevent the growth of Fbxo22-depleted, ER-positive breast cancers both in vitro and in vivo. Clinically, a low level of Fbxo22 in tumor tissues predicted a poorer outcome in ER-positive/human epidermal growth factor receptor type 2–negative (HER2-negative) breast cancers with high hazard ratios, independently of other markers such as Ki-67 and node status. We propose that the level of Fbxo22 in tumor tissues defines a new subclass of ER-positive breast cancers for which SCFFbxo22-mediated KDM4B degradation in patients can be a therapeutic target for the next generation of SERMs.

Fbxo22 forms a ternary complex with ER and KDM4B in a ligand type–dependent manner in MCF7 cells. 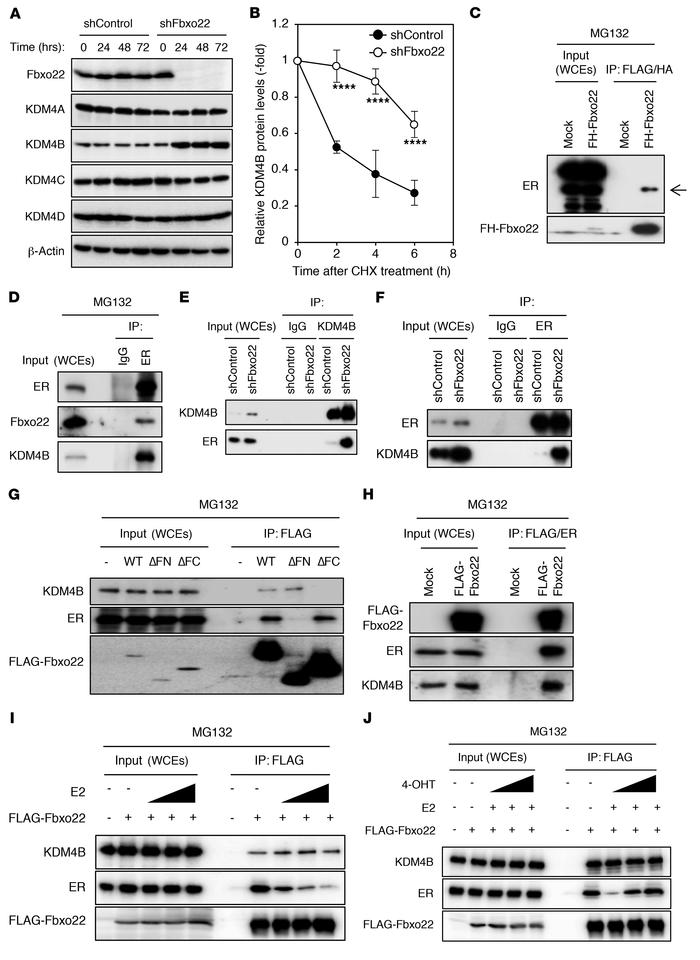