ASXL1 is frequently mutated in myeloid malignancies and is known to co-occur with other gene mutations. However, the molecular mechanisms underlying the leukemogenesis associated with ASXL1 and cooperating mutations remain to be elucidated. Here, we report that Asxl1 loss cooperated with haploinsufficiency of Nf1, a negative regulator of the RAS signaling pathway, to accelerate the development of myeloid leukemia in mice. Loss of Asxl1 and Nf1 in hematopoietic stem and progenitor cells resulted in a gain-of-function transcriptional activation of multiple pathways such as MYC, NRAS, and BRD4 that are critical for leukemogenesis. The hyperactive MYC and BRD9 transcription programs were correlated with elevated H3K4 trimethylation at the promoter regions of genes involving these pathways. Furthermore, pharmacological inhibition of both the MAPK pathway and BET bromodomain prevented leukemia initiation and inhibited disease progression in Asxl1Δ/Δ Nf1Δ/Δ mice. Concomitant mutations of ASXL1 and RAS pathway genes were associated with aggressive progression of myeloid malignancies in patients. This study sheds light on the effect of cooperation between epigenetic alterations and signaling pathways on accelerating the progression of myeloid malignancies and provides a rational therapeutic strategy for the treatment of myeloid malignancies with ASXL1 and RAS pathway gene mutations. 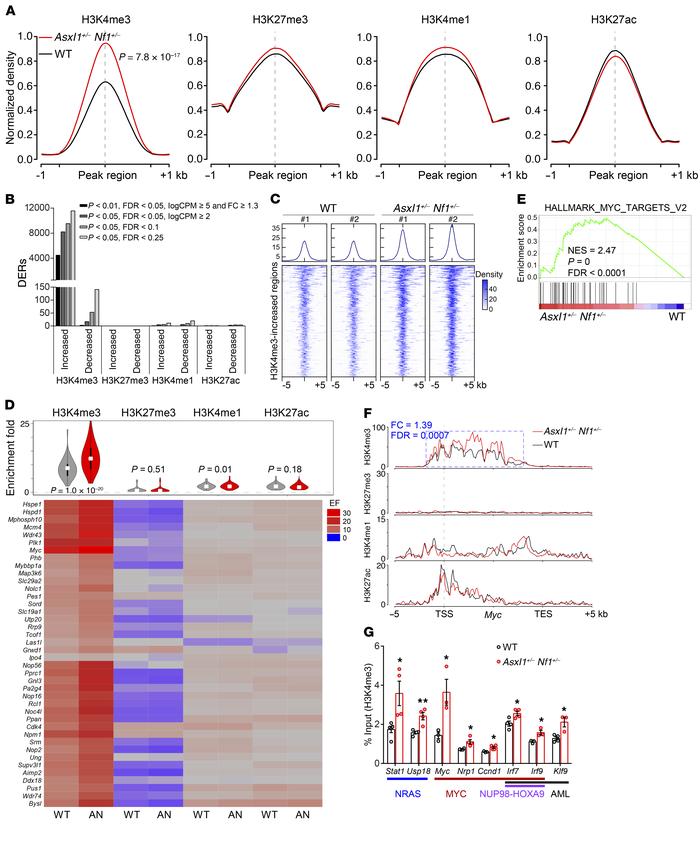 () Global levels of histone modifications at peaks and flanking 1-kb regions. For ease of comparison, normalized coverages by sequencing depth were scaled to 100% and averaged in 2 biological replicates. () Number of DERs for each histone modification identified in cells compared with WT cells according to different cutoffs. () Density plot of H3K4me3 ChIP-Seq data sets centered on the midpoints of 610 H3K4me3-increased regions. The plot depicts tag counts in 50-bp bins in the ± 5-kb region surrounding the center. Each row represents a single region. () Heatmap displays the densities of histone modification marks on 40 activated genes from the hallmark MYC signature. The ChIP signal density was calculated to be enrichment fold (EF) for the TSS ± 5-kb regions that were averaged in 2 biological replicates. AN, . () GSEA plot showing enrichment of the hallmark MYC signature consisting of 40 activated genes in genes marked by promoter H3K4me3 occupancies in versus WT cells. NES, , and FDR values are shown. () Normalized ChIP-binding signals are displayed for 4 histone modifications on the gene. The axis represents the normalized read density that was averaged in 2 biological replicates. The identified DER and its statistical difference between versus WT cells are indicated in a blue box. TES, transcription end site. () ChIP-qPCR verified the increase in H3K4me3 occupancies at the promoters of the indicated genes associated with NRAS, MYC, NUP98-HOXA9, and AML ( = 3–4 mice per group). Data represent the mean ± SEM. * < 0.05 and ** < 0.01, by unpaired Student’s test.