HIV posttreatment controllers (PTCs) represent a natural model of sustained HIV remission, but they are rare and little is known about their viral reservoir. We obtained 1,450 proviral sequences after near-full-length amplification for 10 PTCs and 16 posttreatment noncontrollers (NCs). Before treatment interruption, the median intact and total reservoir size in PTCs was 7-fold lower than in NCs, but the proportion of intact, defective, and total clonally expanded proviral genomes was not significantly different between the 2 groups. Quantification of total but not intact proviral genome copies predicted sustained HIV remission as 81% of NCs, but none of the PTCs had a total proviral genome greater than 4 copies per million peripheral blood mononuclear cells (PBMCs). The results highlight the restricted intact and defective HIV reservoir in PTCs and suggest that total proviral genome burden could act as the first biomarker for identifying PTCs. Total and defective but not intact proviral copy numbers correlated with levels of cell-associated HIV RNA, activated NK cell percentages, and both HIV-specific CD4+ and CD8+ responses. These results support the concept that defective HIV genomes can lead to viral antigen production and interact with both the innate and adaptive immune systems. 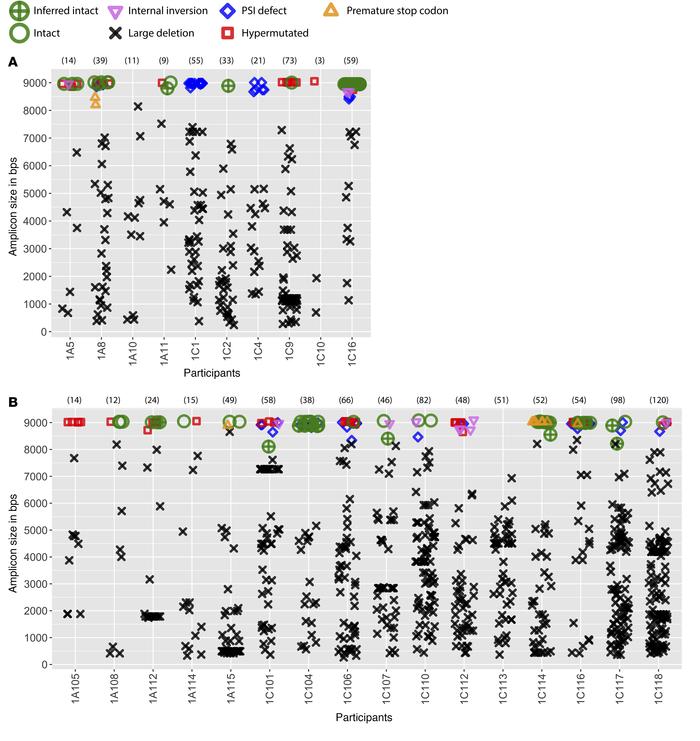 ( and ) For each participant, the amplified proviral sequences are graphed by amplicon size and type of defect and labeled accordingly for PTCs () and NCs (). There are 303 proviral genomes shown for PTCs and 821 shown for NCs. The number of sequences obtained from each participant is shown in parenthesis at the top of the graph. PSI, packaging signal.