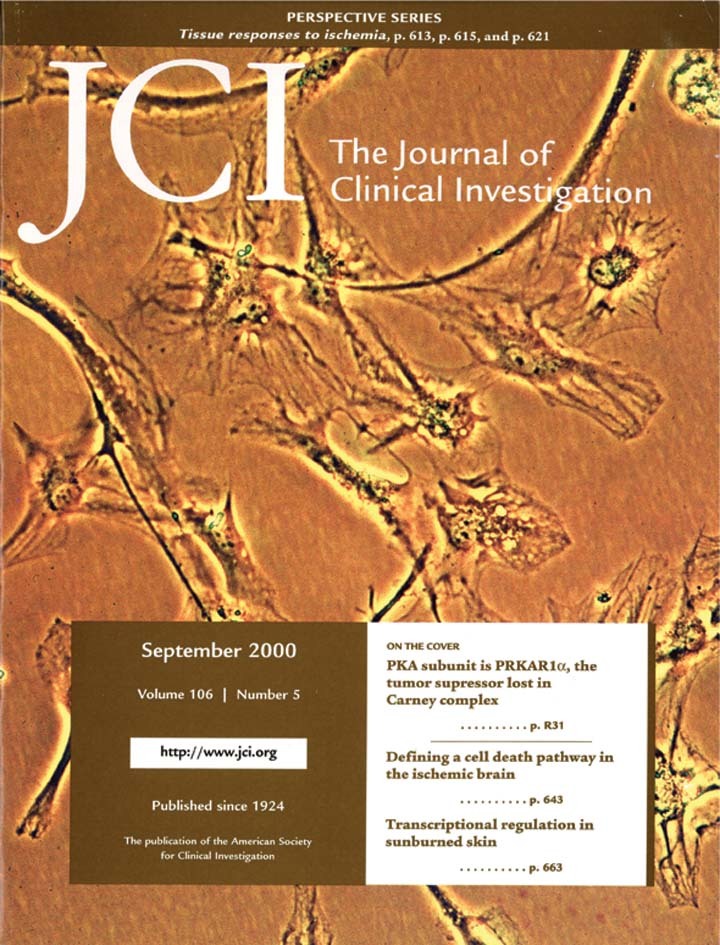 Letter to the Editor

B. Dubois, B. Arnold, G. Opdenakker

Ions and signal transduction in the macula densa

Ions and signal transduction in the macula densa

Cardiac myxomas are benign mesenchymal tumors that can present as components of the human autosomal dominant disorder Carney complex. Syndromic cardiac myxomas are associated with spotty pigmentation of the skin and endocrinopathy. Our linkage analysis mapped a Carney complex gene defect to chromosome 17q24. We now demonstrate that the PRKAR1α gene encoding the R1α regulatory subunit of cAMP-dependent protein kinase A (PKA) maps to this chromosome 17q24 locus. Furthermore, we show that PRKAR1α frameshift mutations in three unrelated families result in haploinsufficiency of R1α and cause Carney complex. We did not detect any truncated R1α protein encoded by mutant PRKAR1α. Although cardiac tumorigenesis may require a second somatic mutation, DNA and protein analyses of an atrial myxoma resected from a Carney complex patient with a PRKAR1α deletion revealed that the myxoma cells retain both the wild-type and the mutant PRKAR1α alleles and that wild-type R1α protein is stably expressed. However, in this atrial myxoma, we did observe a reversal of the ratio of R1α to R2β regulatory subunit protein, which may contribute to tumorigenesis. Further investigation will elucidate the cell-specific effects of PRKAR1α haploinsufficiency on PKA activity and the role of PKA in cardiac growth and differentiation.

Caspases determine the vulnerability of oligodendrocytes in the ischemic brain

Caspases determine the vulnerability of oligodendrocytes in the ischemic brain

Although oligodendrocytes (OLGs) are thought to be vulnerable to hypoxia and ischemia, little is known about the detailed mechanism by which these insults induce OLG death. From the clinical viewpoint, it is imperative to protect OLGs as well as neurons against ischemic injury (stroke), because they are the only myelin-forming cells of the central nervous system. Using the Cre/loxP system, we have established a transgenic mouse line that selectively expresses p35, a broad-spectrum caspase inhibitor, in OLGs. After hypoxia, cultured OLGs derived from wild-type mice exhibited significant upregulation of caspase-11 and substantial activation of caspase-3, which led to cell loss. Expression of p35 or elimination of caspase-11 suppressed the caspase-3 activation and conferred significant protection against hypoxic injury. Expression of p35 in OLGs in vivo resulted in significant protection from ischemia-induced cell injury, thus indicating that caspases are involved in the ischemia-induced cell death of OLGs. Furthermore, the induction of caspase-11 was evident in the ischemic brains of wild-type mice, and OLGs exhibited resistance to brain ischemia in mice deficient in caspase-11, suggesting that caspase-11 is critically implicated in the mechanism(s) underlying ischemia-induced OLG death. Caspases may therefore offer a good therapeutic target for reducing ischemia-induced damage to OLGs.

Dilated cardiomyopathy (DCM) is a major cause of morbidity and mortality. Two genes have been identified for the X-linked forms (dystrophin and tafazzin), whereas three other genes (actin, lamin A/C, and desmin) cause autosomal dominant DCM; seven other loci for autosomal dominant DCM have been mapped but the genes have not been identified. Hypothesizing that DCM is a disease of the cytoskeleton and sarcolemma, we have focused on candidate genes whose products are found in these structures. Here we report the screening of the human δ-sarcoglycan gene, a member of the dystrophin-associated protein complex, by single-stranded DNA conformation polymorphism analysis and by DNA sequencing in patients with DCM. Mutations affecting the secondary structure were identified in one family and two sporadic cases, whereas immunofluorescence analysis of myocardium from one of these patients demonstrated significant reduction in δ-sarcoglycan staining. No skeletal muscle disease occurred in any of these patients. These data suggest that δ-sarcoglycan is a disease-causing gene responsible for familial and idiopathic DCM and lend support to our “final common pathway” hypothesis that DCM is a cytoskeletalopathy.

The aged appearance of skin following repeated exposure to solar ultraviolet (UV) irradiation stems largely from damage to cutaneous connective tissue, which is composed primarily of type I and type III collagens. We report here that a single exposure to UV irradiation causes significant loss of procollagen synthesis in human skin. Expression of type I and type III procollagens is substantially reduced within 24 hours after a single UV exposure, even at UV doses that cause only minimal skin reddening. Daily UV exposures over 4 days result in sustained reductions of both type I and type III procollagen protein levels for at least 24 hours after the final UV exposure. UV inhibition of type I procollagen synthesis is mediated in part by c-Jun, which is induced by UV irradiation and interferes with procollagen transcription. Pretreatment of human skin in vivo with all-trans retinoic acid inhibits UV induction of c-Jun and protects skin against loss of procollagen synthesis. We have reported previously that UV irradiation induces matrix-degrading metalloproteinases in human skin and that pretreatment of skin with all-trans retinoic acid inhibits this induction. UV irradiation, therefore, damages human skin connective tissue by simultaneously inhibiting procollagen synthesis and stimulating collagen breakdown. All-trans retinoic acid protects against both of these deleterious effects and may thereby retard premature skin aging.

This study used naked DNA vaccination to induce breakdown of tolerance to self and thus elicit immunological memory to native, membrane-bound Fas ligand (FasL). Upon induction of experimental autoimmune encephalomyelitis (EAE), this memory was turned on to provide protective immunity. FasL-specific autoantibodies isolated from protected animals differentially downregulated the in vitro production of TNF-α, but not IFN-γ, by cultured T cells. These autoantibodies were highly protective when they were administered to rats at the onset of EAE. In contrast, administration of these FasL-specific Ab’s to EAE rats after the peak of the acute phase of disease prevented spontaneous recovery from disease. This extended illness is partially explained by inhibition of mononuclear cell apoptosis at the target organ, which resulted in increased accumulation of T cells and macrophages at the site of inflammation. Hence, FasL exerts two distinct, stage-specific regulatory functions in the control of this T-cell mediated autoimmune disease of the central nervous system.

The genetic defect underlying paroxysmal nocturnal hemoglobinuria (PNH) has been shown to reside in PIGA, a gene that encodes an element required for the first step in glycophosphatidylinositol anchor assembly. Why PIGA-mutated cells are able to expand in PNH marrow, however, is as yet unclear. To address this question, we compared the growth of affected CD59–CD34+ and unaffected CD59+CD34+ cells from patients with that of normal CD59+CD34+ cells in liquid culture. One hundred FACS-sorted cells were added per well into microtiter plates, and after 11 days at 37°C the progeny were counted and were analyzed for their differentiation pattern. We found that CD59–CD34+ cells from PNH patients proliferated to levels approaching those of normal cells, but that CD59+CD34+ cells from the patients gave rise to 20- to 140-fold fewer cells. Prior to sorting, the patients’ CD59– and CD59+CD34+ cells were equivalent with respect to early differentiation markers, and following culture, the CD45 differentiation patterns were identical to those of control CD34+ cells. Further analyses of the unsorted CD59+CD34+ population, however, showed elevated levels of Fas receptor. Addition of agonist anti-Fas mAb to cultures reduced the CD59+CD34+ cell yield by up to 78% but had a minimal effect on the CD59–CD34+ cells, whereas antagonist anti-Fas mAb enhanced the yield by up to 250%. These results suggest that expansion of PIGA-mutated cells in PNH marrow is due to a growth defect in nonmutated cells, and that greater susceptibility to apoptosis is one factor involved in the growth impairment.

The cardiac β-adrenergic pathway potently stimulates myocardial performance, thereby providing a mechanism for myocardial contractile reserve. β-Adrenergic activation also increases cardiac nitric oxide (NO) production, which attenuates positive inotropy, suggesting a possible negative feedback mechanism. Recently, in vitro studies suggest that stimulation of the β3-adrenoceptor results in a negative inotropic effect through NO signaling. In this study, using mice with homozygous β3-adrenoceptor deletion mutations, we tested the hypothesis that the β3-adrenoceptor is responsible for β-adrenergic activation of NO. Although resting indices of myocardial contraction were similar, β-adrenergic–stimulated inotropy was increased in β3–/– mice, and similar hyper-responsiveness was seen in mice lacking endothelial NO synthase (NOS3). NOS inhibition augmented isoproterenol-stimulated inotropy in wild-type (WT), but not in β3–/– mice. Moreover, isoproterenol increased myocardial cGMP in WT, but not β3–/–, mice. NOS3 protein abundance was not changed in β3–/– mice, and cardiac β3-adrenoceptor mRNA was detected in both NOS3–/– and WT mice. These findings indicate that the β3-adrenergic subtype participates in NO-mediated negative feedback over β-adrenergic stimulation.

The effectiveness of donor-lymphocyte infusion (DLI) for treatment of relapsed chronic myelogenous leukemia (CML) after allogeneic bone marrow transplantation is a clear demonstration of the graft-versus-leukemia (GVL) effect. T cells are critical mediators of GVL, but the antigenic targets of this response are unknown. To determine whether patients who respond to DLI also develop B-cell immunity to CML-associated antigens, we analyzed sera from three patients with relapsed CML who achieved a complete molecular remission after infusion of donor T cells. Sera from these individuals recognized 13 distinct gene products represented in a CML-derived cDNA library. Two proteins, Jκ-recombination signal-binding protein (RBP-Jκ) and related adhesion focal tyrosine kinase (RAFTK), were recognized by sera from three of 19 DLI responders. None of these antigens were recognized by sera from healthy donors or patients with chronic graft-versus-host disease. Four gene products were recognized by sera from CML patients treated with hydroxyurea and nine were detected by sera from CML patients who responded to IFN-α. Antibody titers specific for RAFTK, but not for RBP-Jκ, were found to be temporally associated with the response to DLI. These results demonstrate that patients who respond to DLI generate potent antibody responses to CML-associated antigens, suggesting the development of coordinated T- and B-cell immunity. The characterization of B cell–defined antigens may help identify clinically relevant targets of the GVL response in vivo.