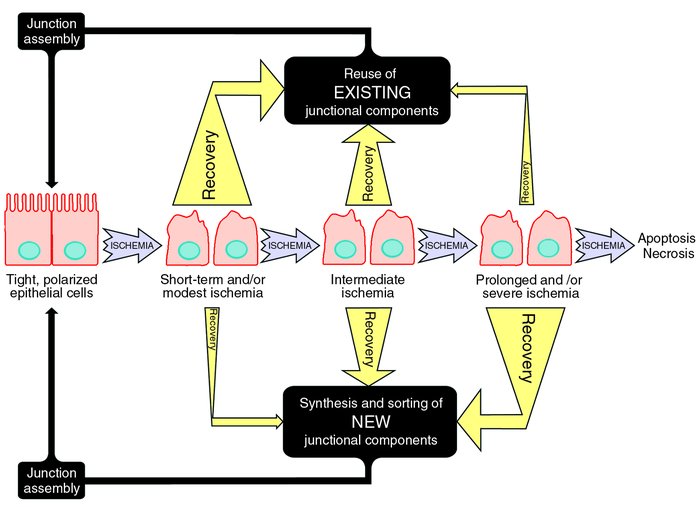 Model depicting general aspects of epithelial cell recovery after ischemia or ATP depletion. The ability of the cell to recover is dependent on the duration and extent of the ischemic insult and can be described as: (a) short-term and/or modest ischemia, (b) intermediate ischemia, and (c) prolonged and/or severe ischemia. After short-term and/or modest ischemia, degradation of critical junctional components has yet to occur, and cells can reestablish the tight, polarized epithelial cell phenotype primarily by reusing existing junctional components (e.g., E-cadherin, catenins) that have been internalized. As described in the text, this may require activation of signaling pathways involving tyrosine phosphorylation, calcium, and GTP. Intermediate ischemia is characterized by the beginning of the degradation of some of the junctional components (e.g., E-cadherin), and complete recovery from such an insult would likely involve a combination of reutilization of existing components together with synthesis of new junctional components. In the case of prolonged and/or severe ischemic injury, degradation of junctional components has proceeded to such an extent that recovery depends primarily on synthesis and assembly of new junctional macromolecular complexes, key proteins of which are folded in the ER. If the ischemic insult is not removed at this point, cell death (either apoptotic or necrotic) will ultimately be the result. The hypothesized relative importance of various pathways under each scenario is indicted by the thickness of the arrows. Intracellular junctions, such as the AJ, serve as an example, but other damaged cellular components may also become more dependent on de novo protein synthesis and ER folding/assembly for recovery as the length or severity of the ischemic insult increases.