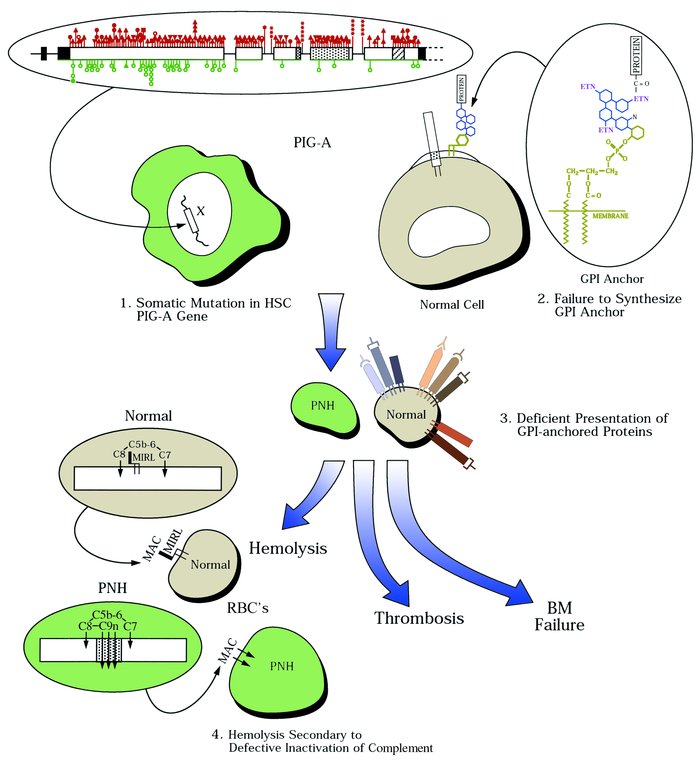 The pathophysiology of PNH. The genetic basis of the disease is diagrammed at upper left. Somatic mutations in the X-linked gene occur in a hematopoietic stem cell. PIG-A consists of six exons with an open reading frame of 1455 bp; the putative protein product has 484 amino acids and an estimated molecular weight of 60 kDa. Small deletion and insertion mutations (dark triangles) are most common in PNH and are distributed throughout the coding sequence; missense mutations (dark circles) appear to cluster in exon 2, suggesting that this region encodes for a functionally crucial portion of the protein (see ref. for details of the GPI-anchor chemical structure). At upper right, GPI-anchored proteins and conventional transmembrane proteins are contrasted, and the structure of the GPI anchor is shown in the inset. The anchor is a glycolipid composed of the lipid phosphatidylinositol, the sugars -glucosamine and mannose, and ethanolamine. The acyl/alkyl-glycerol of the lipid anchors the structure in the bilayer of the cell membrane; an ethanolamine links the carboxyl terminal amino acid of the protein to the oligosaccharide portion of the anchor. The PIG-A gene product contributes to the -acetyl-glucosaminyl transferase activity that adds this sugar to inositol, an early step in construction of the anchor; the entire anchor structure is preformed and then covalently bound to the protein in a transamidation reaction in the endoplasmic reticulum (not shown). Expansion of the clone is required for PNH (see text and Figure ). Absence of GPI-anchored proteins, especially CD59 (MIRL), accounts for hemolysis; the inset shows the role of MIRL in blocking the late complement attack complex, by first binding to C8 and inhibiting spontaneous binding of C9 and then preventing C9 polymerization and subsequent red cell lysis. BM, bone marrow; RBCs, red blood cells; MAC, membrane attack complex.