The cardiac β-adrenergic pathway potently stimulates myocardial performance, thereby providing a mechanism for myocardial contractile reserve. β-Adrenergic activation also increases cardiac nitric oxide (NO) production, which attenuates positive inotropy, suggesting a possible negative feedback mechanism. Recently, in vitro studies suggest that stimulation of the β3-adrenoceptor results in a negative inotropic effect through NO signaling. In this study, using mice with homozygous β3-adrenoceptor deletion mutations, we tested the hypothesis that the β3-adrenoceptor is responsible for β-adrenergic activation of NO. Although resting indices of myocardial contraction were similar, β-adrenergic–stimulated inotropy was increased in β3–/– mice, and similar hyper-responsiveness was seen in mice lacking endothelial NO synthase (NOS3). NOS inhibition augmented isoproterenol-stimulated inotropy in wild-type (WT), but not in β3–/– mice. Moreover, isoproterenol increased myocardial cGMP in WT, but not β3–/–, mice. NOS3 protein abundance was not changed in β3–/– mice, and cardiac β3-adrenoceptor mRNA was detected in both NOS3–/– and WT mice. These findings indicate that the β3-adrenergic subtype participates in NO-mediated negative feedback over β-adrenergic stimulation. 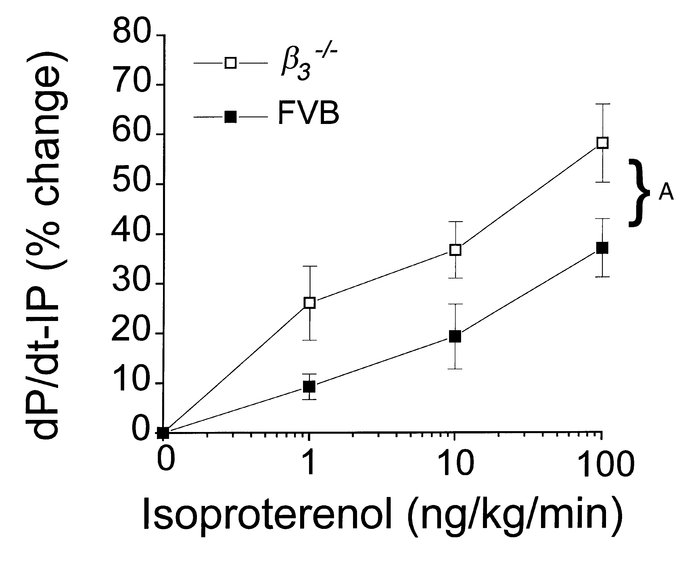 β-Adrenergic concentration-effect curves in and WT mice. Isoproterenol was administered intravenously at rates of 1, 10, and 100 ng/kg/min to WT mice (FVB, = 12) and mice with homozygous β3-adrenoceptor–deletion mutations (; = 7). Peak positive dP/dt divided by the instantaneous left-ventricular pressure (dP/dt-IP) was used as an index of contractility and is displayed as a percentage of change from base line. As shown, the inotropic concentration-effect response to isoproterenol was augmented in mice, relative to FVB. Each concentration-effect relationship was highly significant by one-way ANOVA ( < 0.01). Data are reported as mean ± SEM. A < 0.01, vs. FVB, by two-way ANOVA.