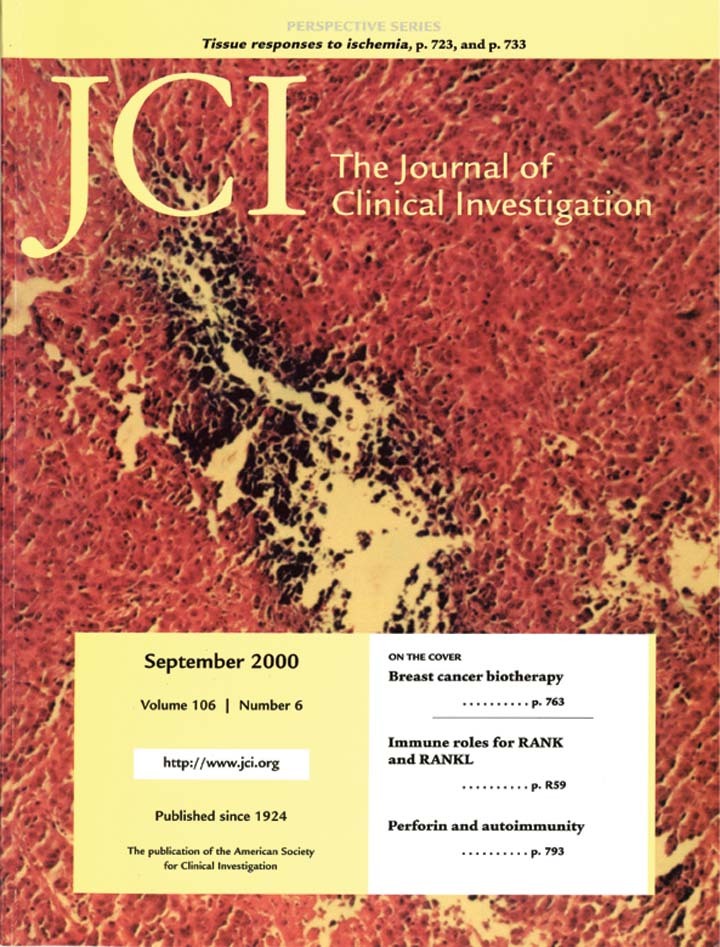 Letter to the Editors

Hypoxia-induced pulmonary vascular remodeling: a model for what human disease?

Hypoxia-induced pulmonary vascular remodeling: a model for what human disease?

Interactions between immune and bone cells: new insights with many remaining questions

Interactions between immune and bone cells: new insights with many remaining questions

Role of perforin in controlling B-cell hyperactivity and humoral autoimmunity

Role of perforin in controlling B-cell hyperactivity and humoral autoimmunity

To determine the role of perforin-mediated cytotoxic T lymphocyte (CTL) effector function in immune regulation, we studied a well-characterized mouse model of graft-versus-host disease (GVHD). Induction of acute GVHD using perforin-deficient donor T cells (pfp→F1) initially resulted in features of acute GVHD, e.g., engraftment of both donor CD4+ and CD8+ T cells, upregulation of Fas and FasL, production of antihost CTL, and secretion of both Th1 and Th2 cytokines. Despite fully functional FasL activity, pfp donor cells failed to totally eliminate host B cells, and, by 4 weeks of disease, cytokine production in pfp→F1 mice had polarized to a Th2 response. Pfp→F1 mice eventually developed features of chronic GVHD, such as increased numbers of B cells, persistence of donor CD4 T cells, autoantibody production, and lupuslike renal disease. We conclude that in the setting of B- and T-cell activation, perforin plays an important immunoregulatory role in the prevention of humoral autoimmunity through the elimination of both autoreactive B cells and ag-specific T cells. Moreover, an ineffective initial CTL response can evolve into a persistent antibody-mediated response and, with it, the potential for sustained humoral autoimmunity.

CD8+ T lymphocyte responses are a critical arm of the immune response to respiratory virus infection and may play a role in the pathogenesis of interstitial lung disease. We have shown that CD8+ T cells induce significant lung injury in the absence of virus infection by adoptive transfer into mice with alveolar expression of a viral transgene. The injury is characterized by the parenchymal infiltration of host cells, primarily macrophages, which correlates with physiologic deficits in transgenic animals. CD8+ T cell–mediated lung injury can occur in the absence of perforin and Fas expression as long as TNF-α is available. Here, we show that the effect of TNF-α expressed by CD8+ T cells is mediated not exclusively by cytotoxicity, but also through the activation of alveolar target cells and their expression of inflammatory mediators. CD8+ T cell recognition of alveolar cells in vitro triggered monocyte chemoattractant protein-1 (MCP-1) and macrophage inflammatory protein-2 (MIP-2) expression in the targets, which was mediated by TNF-α. Antigen-dependent alveolar MCP-1 expression was observed in vivo as early as 3 hours after CD8+ T cell transfer and depended upon TNF-R1 expression in transgenic recipients. MCP-1 neutralization significantly reduced parenchymal infiltration after T cell transfer. We conclude that alveolar epithelial cells actively participate in the inflammation and lung injury associated with CD8+ T cell recognition of alveolar antigens.

Role of the Cdc25A phosphatase in human breast cancer

Role of the Cdc25A phosphatase in human breast cancer

The phosphatase Cdc25A plays an important role in cell cycle regulation by removing inhibitory phosphates from tyrosine and threonine residues of cyclin-dependent kinases, and it has been shown to transform diploid murine fibroblasts in cooperation with activated Ras. Here we show that Cdc25A is overexpressed in primary breast tumors and that such overexpression is correlated with higher levels of cyclin-dependent kinase 2 (Cdk2) enzymatic activity in vivo. Furthermore, in the breast cancer cell line MCF-7, Cdc25A activity is necessary for both the activation of Cdk2 and the subsequent induction of S-phase entry. Finally, in a series of small (< 1 cm) breast carcinomas, overexpression of Cdc25A was found in 47% of patients and was associated with poor survival. These data suggest that overexpression of Cdc25A contributes to the biological behavior of primary breast tumors and that both Cdc25A and Cdk2 are suitable therapeutic targets in early-stage breast cancer.

The DF3/MUC1 gene is aberrantly overexpressed in human breast and other carcinomas. Previous studies have demonstrated that the DF3/MUC1 promoter/enhancer confers selective expression of diverse transgenes in MUC1-positive breast cancer cells. In this study, we show that an adenoviral vector (Ad.DF3-E1) in which the DF3/MUC1 promoter drives expression of E1A selectively replicates in MUC1-positive breast cancer cells. We also show that Ad.DF3-E1 infection of human breast tumor xenografts in nude mice is associated with inhibition of tumor growth. In contrast to a replication-incompetent adenoviral vector that infects along the injection track, Ad.DF3-E1 infection was detectable throughout the tumor xenografts. To generate an Ad.DF3-E1 vector with the capacity for incorporating therapeutic products, we inserted the cytomegalovirus (CMV) promoter upstream of the TNF cDNA. Infection with Ad.DF3-E1/CMV-TNF was associated with selective replication and production of TNF in cells that express MUC1. Moreover, treatment of MUC1-positive, but not MUC1-negative, xenografts with a single injection of Ad.DF3-E1/CMV-TNF was effective in inducing stable tumor regression. These findings demonstrate that the DF3/MUC1 promoter confers competence for selective replication of Ad.DF3-E1 in MUC1-positive breast tumor cells, and that the antitumor activity of this vector is potentiated by integration of the TNF cDNA.

Autodigestion of the pancreas by its own prematurely activated digestive proteases is thought to be an important event in the onset of acute pancreatitis. The mechanism responsible for the intrapancreatic activation of digestive zymogens is unknown, but a recent hypothesis predicts that a redistribution of lysosomal cathepsin B (CTSB) into a zymogen-containing subcellular compartment triggers this event. To test this hypothesis, we used CTSB-deficient mice in which the ctsb gene had been deleted by targeted disruption. After induction of experimental secretagogue–induced pancreatitis, the trypsin activity in the pancreas of ctsb–/– animals was more than 80% lower than in ctsb+/+ animals. Pancreatic damage as indicated by serum activities of amylase and lipase, or by the extent of acinar tissue necrosis, was 50% lower in ctsb–/– animals. These experiments provide the first conclusive evidence to our knowledge that cathepsin B plays a role in intrapancreatic trypsinogen activation and the onset of acute pancreatitis.

Hyperoxia is an important cause of acute lung injury. To determine whether IL-13 is protective in hyperoxia, we compared the survival in 100% O2 of transgenic mice that overexpress IL-13 in the lung and of nontransgenic littermate controls. IL-13 enhanced survival in 100% O2. One hundred percent of nontransgenic mice died in 4–5 days, whereas 100% of IL-13–overexpressing mice lived for more than 7 days, and many lived 10–14 days. IL-13 also stimulated VEGF accumulation in mice breathing room air, and it interacted with 100% 2 to increase VEGF accumulation further. The 164–amino acid isoform was the major VEGF moiety in bronchoalveolar lavage from transgenic mice in room air, whereas the 120– and 188–amino acid isoforms accumulated in these mice during hyperoxia. In addition, antibody neutralization of VEGF decreased the survival of IL-13–overexpressing mice in 100% 2. These studies demonstrate that IL-13 has protective effects in hyperoxic acute lung injury. They also demonstrate that IL-13, alone and in combination with 100% 2, stimulates pulmonary VEGF accumulation, that this stimulation is isoform-specific, and that the protective effects of IL-13 are mediated, in part, by VEGF.

The CCR2-mediated recruitment of monocytes into the vessel wall plays an important role in all stages of atherosclerosis. In recent studies, we have shown that lipoproteins can modulate CCR2 expression and have identified native LDL as a positive regulator. In contrast, oxidized LDL (OxLDL), which is mainly formed in the aortic intima, reduces CCR2 expression, promotes monocyte retention, and may cause pathological accumulation of monocytes in the vessel wall. We now provide evidence that OxLDL reduces monocyte CCR2 expression by activating intracellular signaling pathways that may involve peroxisome proliferator–activated receptor γ (PPARγ). Receptor-mediated uptake of the lipoprotein particle was required and allows for delivery of the exogenous ligand to the nuclear receptor. The suppression of CCR2 expression by OxLDL was mediated by lipid components of OxLDL, such as the oxidized linoleic acid metabolites 9-HODE and 13-HODE, known activators of PPARγ. Modified apoB had no such effect. Consistent with a participation of the PPARγ signaling pathway, BRL49653 reduced CCR2 expression in freshly isolated human monocytes ex vivo and in circulating mouse monocytes in vivo. These results implicate PPARγ in the inhibition of CCR2 gene expression by oxidized lipids, which may help retain monocytes at sites of inflammation, such as the atherosclerotic lesion.