CD8+ T lymphocyte responses are a critical arm of the immune response to respiratory virus infection and may play a role in the pathogenesis of interstitial lung disease. We have shown that CD8+ T cells induce significant lung injury in the absence of virus infection by adoptive transfer into mice with alveolar expression of a viral transgene. The injury is characterized by the parenchymal infiltration of host cells, primarily macrophages, which correlates with physiologic deficits in transgenic animals. CD8+ T cell–mediated lung injury can occur in the absence of perforin and Fas expression as long as TNF-α is available. Here, we show that the effect of TNF-α expressed by CD8+ T cells is mediated not exclusively by cytotoxicity, but also through the activation of alveolar target cells and their expression of inflammatory mediators. CD8+ T cell recognition of alveolar cells in vitro triggered monocyte chemoattractant protein-1 (MCP-1) and macrophage inflammatory protein-2 (MIP-2) expression in the targets, which was mediated by TNF-α. Antigen-dependent alveolar MCP-1 expression was observed in vivo as early as 3 hours after CD8+ T cell transfer and depended upon TNF-R1 expression in transgenic recipients. MCP-1 neutralization significantly reduced parenchymal infiltration after T cell transfer. We conclude that alveolar epithelial cells actively participate in the inflammation and lung injury associated with CD8+ T cell recognition of alveolar antigens. 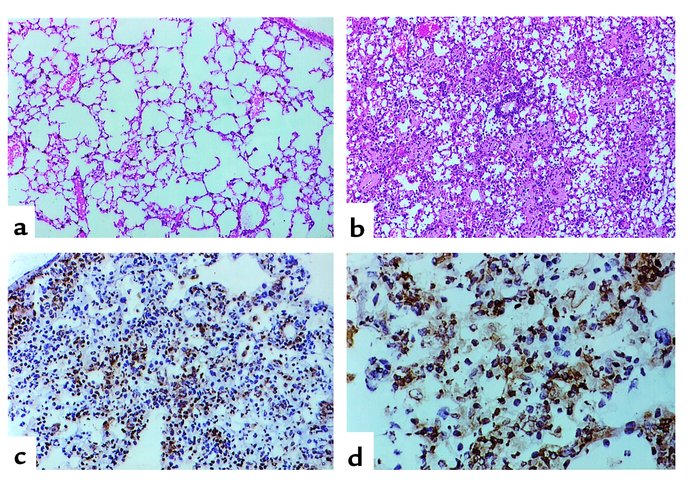 Histologic sections from lungs harvested 4 days after adoptive transfer of 5 × 106 CD8+ T cell clone 40-2. () The benign appearance of lung parenchyma harvested from a nontransgenic littermate, at low power. () The pattern of injury in the SPC-HA–transgenic animals, also at low power ( and were stained with H&E). ( and ) Immunoperoxidase staining of lung sections with an antimacrophage Ab (F4/80), at low power () and high power ().