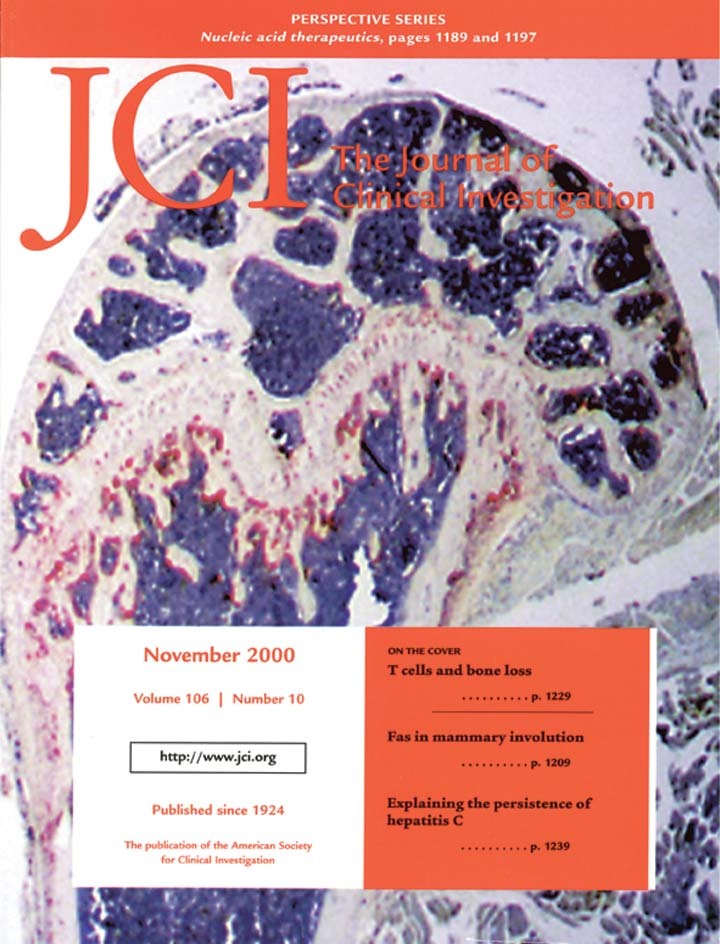 The mechanisms of estrogen regulation of bone resorption

The mechanisms of estrogen regulation of bone resorption

Tangier disease as a test of the reverse cholesterol transport hypothesis

Tangier disease as a test of the reverse cholesterol transport hypothesis

Roles of Fas and Fas ligand during mammary gland remodeling

Roles of Fas and Fas ligand during mammary gland remodeling

Mammary involution is associated with degeneration of the alveolar structure and programmed cell death of mammary epithelial cells. In this study, we evaluated the expression of Fas and Fas ligand (FasL) in the mammary gland tissue and their possible role in the induction of apoptosis of mammary cells. FasL-positive cells were observed in normal mammary epithelium from pregnant and lactating mice, but not in nonpregnant/virgin mouse mammary tissue. Fas expression was observed in epithelial and stromal cells in nonpregnant mice but was absent during pregnancy. At day 1 after weaning, high levels of both Fas and FasL proteins and caspase 3 were observed and coincided with the appearance of apoptotic cells in ducts and glands. During the same period, no apoptotic cells were found in the Fas-deficient (MRL/lpr) and FasL-deficient (C3H/gld) mice. Increase in Fas and FasL protein was demonstrated in human (MCF10A) and mouse (HC-11) mammary epithelial cells after incubation in hormone-deprived media, before apoptosis was detected. These results suggest that the Fas-FasL interaction plays an important role in the normal remodeling of mammary tissue. Furthermore, this autocrine induction of apoptosis may prevent accumulation of cells with mutations and subsequent neoplastic development. Failure of the Fas/FasL signal could contribute to tumor development.

Adipose tissue is required for the antidiabetic, but not for the hypolipidemic, effect of thiazolidinediones

Adipose tissue is required for the antidiabetic, but not for the hypolipidemic, effect of thiazolidinediones

There is uncertainty about the site(s) of action of the antidiabetic thiazolidinediones (TZDs). These drugs are agonist ligands of the transcription factor PPARγ, which is abundant in adipose tissue but is normally present at very low levels in liver and muscle. We have studied the effects of TZDs in A-ZIP/F-1 mice, which lack white adipose tissue. The A-ZIP/F-1 phenotype strikingly resembles that of humans with severe lipoatrophic diabetes, including the lack of fat, marked insulin resistance and hyperglycemia, hyperlipidemia, and fatty liver. Rosiglitazone or troglitazone treatment did not reduce glucose or insulin levels, suggesting that white adipose tissue is required for the antidiabetic effects of TZDs. However, TZD treatment was effective in lowering circulating triglycerides and increasing whole body fatty acid oxidation in the A-ZIP/F-1 mice, indicating that this effect occurs via targets other than white adipose tissue. A-ZIP/F-1 mice have markedly increased liver PPARγ mRNA levels, which may be a general property of fatty livers. Rosiglitazone treatment increased the triglyceride content of the steatotic livers of A-ZIP/F-1 and ob/ob mice, but not the “lean” livers of fat-transplanted A-ZIP/F-1 mice. In light of this evidence that rosiglitazone acts differently in steatotic livers, the effects of rosiglitazone, particularly on hepatic triglyceride levels, should be examined in humans with hepatic steatosis.

Estrogen deficiency induces bone loss by upregulating osteoclastogenesis by mechanisms not completely defined. We found that ovariectomy-enhanced T-cell production of TNF-α, which, acting through the TNF-α receptor p55, augments macrophage colony-stimulating factor–induced (M-CSF–induced) and RANKL-induced osteoclastogenesis. Ovariectomy failed to induce bone loss, stimulate bone resorption, or increase M-CSF– and RANKL-dependent osteoclastogenesis in T-cell deficient mice, establishing T cells as essential mediators of the bone-wasting effects of estrogen deficiency in vivo. These findings demonstrate that the ability of estrogen to target T cells, suppressing their production of TNF-α, is a key mechanism by which estrogen prevents osteoclastic bone resorption and bone loss.

Hepatitis C virus (HCV) is an important human pathogen that is remarkably efficient at establishing persistent infection. The HCV core protein is the first protein expressed during the early phase of HCV infection. Our previous work demonstrated that the HCV core protein suppresses host immune responses, including anti-viral cytotoxic T-lymphocyte responses in a murine model. To investigate the mechanism of HCV core-mediated immunosuppression, we searched for host proteins capable of associating with the core protein using a yeast two-hybrid system. Using the core protein as bait, we screened a human T cell–enriched expression library and identified a gene encoding the gC1q receptor (gC1qR). C1q is a ligand of gC1qR and is involved in the early host defense against infection. Like C1q, HCV core can inhibit T-cell proliferative responses in vitro. This core-induced anti–T-cell proliferation is reversed by addition of anti-gC1qR Ab in a T-cell proliferation assay. Furthermore, biochemical analysis of the interaction between core and gC1qR indicates that HCV core binds the region spanning amino acids 188 to 259 of gC1qR, a site distinct from the binding region of C1q. The inhibition of T-cell responsiveness by HCV core may have important implications for HCV persistence in humans.

We and others have recently identified mutations in the ABCA1 gene as the underlying cause of Tangier disease (TD) and of a dominantly inherited form of familial hypoalphalipoproteinemia (FHA) associated with reduced cholesterol efflux. We have now identified 13 ABCA1 mutations in 11 families (five TD, six FHA) and have examined the phenotypes of 77 individuals heterozygous for mutations in the ABCA1 gene. ABCA1 heterozygotes have decreased HDL cholesterol (HDL-C) and increased triglycerides. Age is an important modifier of the phenotype in heterozygotes, with a higher proportion of heterozygotes aged 30–70 years having HDL-C greater than the fifth percentile for age and sex compared with carriers less than 30 years of age. Levels of cholesterol efflux are highly correlated with HDL-C levels, accounting for 82% of its variation. Each 8% change in ABCA1-mediated efflux is predicted to be associated with a 0.1 mmol/l change in HDL-C. ABCA1 heterozygotes display a greater than threefold increase in the frequency of coronary artery disease (CAD), with earlier onset than unaffected family members. CAD is more frequent in those heterozygotes with lower cholesterol efflux values. These data provide direct evidence that impairment of cholesterol efflux and consequently reverse cholesterol transport is associated with reduced plasma HDL-C levels and increased risk of CAD.

Multiorgan apoptosis occurs during sepsis. Following cecal ligation and puncture (CLP) in rats, thymocytes underwent apoptosis in a time-dependent manner. C5a blockade dramatically reduced thymocyte apoptosis as measured by thymic weight, binding of annexin V to thymocytes, and laddering of thymocyte DNA. When C5a was generated in vivo by infusion of purified cobra venom factor (CVF), thymocyte apoptosis was significantly increased. Similar results were found when CVF was injected in vivo during the early stages of CLP. In animals 12 hours after induction of CLP, there was an increase in the activities of caspase-3, -6, and -9, but not caspase-1 and -8. Cytosolic cytochrome c levels increased by twofold, whereas mitochondrial levels showed a 50% decrease. Western blot analysis revealed that the content of Bcl-XL (but not of Bcl-2, BAX, Bad, and Bim) significantly decreased in thymocytes after CLP. C5a blockade in the sepsis model almost completely inhibited caspase-3, -6, and -9 activation, significantly preserved cytochrome c in the mitochondrial fraction, and restored Bcl-XL expression. These data suggest that systemic activation of complement induces C5a-dependent apoptosis of thymocytes and that the blockade of C5a during sepsis rescues thymocytes from apoptosis.

Glomerular epithelial protein 1 (GLEPP1) is a receptor tyrosine phosphatase present on the apical cell surface of the glomerular podocyte. The GLEPP1 gene (Ptpro) was disrupted at an exon coding for the NH2-terminal region by gene targeting in embryonic stem cells. Heterozygote mating produced the expected genotypic ratio of 1:2:1, indicating that the Ptpro–/– genotype does not lead to embryonic or neonatal lethality. Kidney and glomerular structure was normal at the gross and light microscopic levels. Scanning and transmission electron microscopy showed that Ptpro–/– mice had an amoeboid rather than the typical octopoid structure seen in the wild-type mouse podocyte and that there were blunting and widening of the minor (foot) processes in association with altered distribution of the podocyte intermediate cytoskeletal protein vimentin. Reduced filtration surface area in association with these structural changes was confirmed by finding reduced glomerular nephrin content and reduced glomerular filtration rate in Ptpro–/– mice. There was no detectable increase in the urine albumin excretion of Ptpro–/– mice. After removal of one or more kidneys, Ptpro–/– mice had higher blood pressure than did their wild-type littermates. These data support the conclusion that the GLEPP1 (Ptpro) receptor plays a role in regulating the glomerular pressure/filtration rate relationship through an effect on podocyte structure and function.

Severe infection or tissue invasion can provoke a catabolic response, leading to severe metabolic derangement, cachexia, and even death. Macrophage migration inhibitory factor (MIF) is an important regulator of the host response to infection. Released by various immune cells and by the anterior pituitary gland, MIF plays a critical role in the systemic inflammatory response by counterregulating the inhibitory effect of glucocorticoids on immune-cell activation and proinflammatory cytokine production. We describe herein an unexpected role for MIF in the regulation of glycolysis. The addition of MIF to differentiated L6 rat myotubes increased synthesis of fructose 2,6-bisphosphate (F2,6BP), a positive allosteric regulator of glycolysis. Increased expression of the enzyme 6-phosphofructo-2-kinase/fructose-2,6-bisphosphatase (PFK-2) enhanced F2,6BP production and, consequently, cellular lactate production. The catabolic effect of TNF-α on myotubes was mediated by MIF, which served as an autocrine stimulus for F2,6BP production. TNF-α administered to mice decreased serum glucose levels and increased muscle F2,6BP levels; pretreatment with a neutralizing anti-MIF mAb completely inhibited these effects. Anti-MIF also prevented hypoglycemia and increased muscle F2,6BP levels in TNF-α–knockout mice that were administered LPS, supporting the intrinsic contribution of MIF to these inflammation-induced metabolic changes. Taken together with the recent finding that MIF is a positive, autocrine stimulator of insulin release, these data suggest an important role for MIF in the control of host glucose disposal and carbohydrate metabolism.