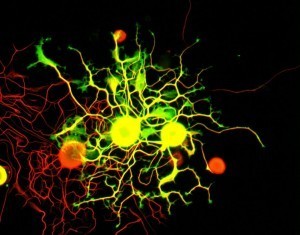 Although peripheral nerves can regenerate after injury, proximal nerve injury in humans results in minimal restoration of motor function. One possible explanation for this is that injury-induced axonal growth is too slow. Heat shock protein 27 (Hsp27) is a regeneration-associated protein that accelerates axonal growth in vitro. Here, we have shown that it can also do this in mice after peripheral nerve injury. While rapid motor and sensory recovery occurred in mice after a sciatic nerve crush injury, there was little return of motor function after sciatic nerve transection, because of the delay in motor axons reaching their target. This was not due to a failure of axonal growth, because injured motor axons eventually fully re-extended into muscles and sensory function returned; rather, it resulted from a lack of motor end plate reinnervation. Tg mice expressing high levels of Hsp27 demonstrated enhanced restoration of motor function after nerve transection/resuture by enabling motor synapse reinnervation, but only within 5 weeks of injury. In humans with peripheral nerve injuries, shorter wait times to decompression surgery led to improved functional recovery, and, while a return of sensation occurred in all patients, motor recovery was limited. Thus, absence of motor recovery after nerve damage may result from a failure of synapse reformation after prolonged denervation rather than a failure of axonal growth.