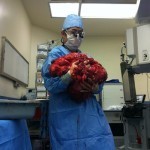 [/caption]
Dr. Tomoaki Kato, of Columbia University, removed an abdominal myxoid round cell liposarcoma (MRCLS) from a patient described in Charytonowicz et al. The tumor had 4 segments, the largest of which weighed 37 pounds. Charytonowicz et al. describe a mouse model of MRCLS, and investigate an effective new therapy.
Published February 1, 2012, by Kathryn Claiborn