A model of periventricular leukomalacia 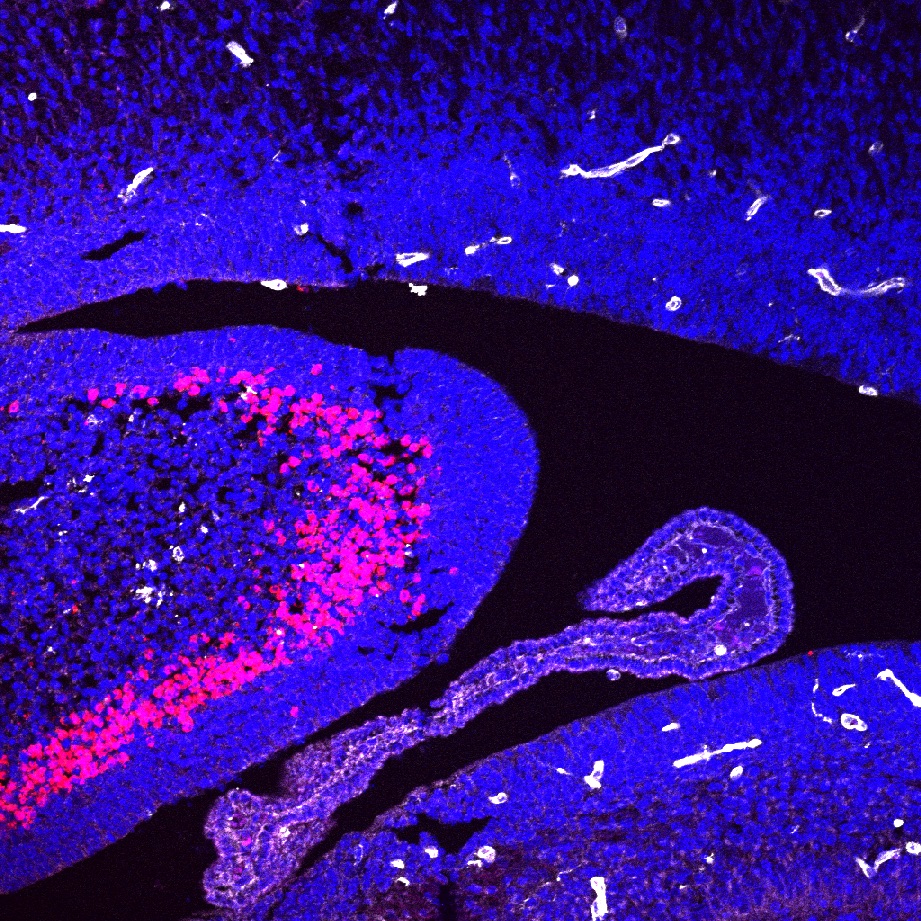 Prematurity can lead to a variety of chronic neurological deficits in children, including periventricular leukomalacia (PVL), which is characterized by death of the white matter surrounding the lateral ventricles. As developing neurons rely on simultaneous tissue vascularization for survival, angiogenic insults, such as hypoxia, have been implicated in PVL. Injuries of prematurity are common within a restricted gestational window and within specific regions of the brain. Unfortunately, animal models have not recapitulated the spatial and temporal distribution of PVL. Tamar Licht, Talia Dor-Wollman and colleagues at the Hebrew University of Jerusalem developed an inducible, bi-transgenic mouse model, whereby VEGF-dependent angiogenesis can be blocked at specific developmental periods of periventricular blood vessel development. VEGF blockade only during a specific, critical developmental window (E13.5-14.5) caused neuronal death that mimicks human PVL. VEGF-dependent immature blood vessels matured in a wave-like pattern, starting at the brain periphery and maturing last at the ventricles, with maturity characterized by the acquisition of a blood-brain barrier. Together, the results from this study establish an animal model of PVL that demonstrates that damage to immature periventricular vessels underlies disease.  In the accompanying commentary, Jason Boehme and Emin Maltepe at UCSFF suggest that these findings may support a tiered approach to oxygen saturation in premature infants at risk of vascular injuries. The accompanying image depicts highly restricted neuronal apoptosis (red) in the vulnerable periventricular region of the developing brain (blue).

Premature birth is a major risk factor for multiple brain pathologies, notably periventricular leukomalacia (PVL), which is distinguished by bilateral necrosis of neural tissue around the ventricles and a sequela of neurological disturbances. The 2 hallmarks of brain pathologies of prematurity are a restricted gestational window of vulnerability and confinement of injury to a specific cerebral region. Here, we examined the proposition that both of these features are determined by the state of blood vessel immaturity. We developed a murine genetic model that allows for inducible and reversible VEGF blockade during brain development. Using this system, we determined that cerebral vessels mature in a centrifugal, wave-like fashion that results in sequential acquisition of a functional blood-brain barrier and exit from a VEGF-dependent phase, with periventricular vessels being the last to mature. This developmental program permitted selective ablation of periventricular vessels via episodic VEGF blockade within a specific, vulnerable gestational window. Enforced collapse of ganglionic eminence vessels and resultant periventricular neural apoptosis resulted in a PVL-like phenotype that recapitulates the primary periventricular lesion, ventricular enlargement, and the secondary cortical deficit in out-migrating GABAergic inhibitory interneurons. These findings provide an animal model that reproduces the temporal and spatial specificities of PVL and indicate that damage to VEGF-dependent, immature periventricular vessels contributes to PVL development.

Clinical vignette: An 8-year-old boy presents to the pediatric ICU after two days of cough with increasing secretions. The patient is progressing to respiratory failure and requires noninvasive mechanical ventilation. His past medical history is remarkable for premature birth at 25 and 6/7 weeks gestational age, cerebral palsy, developmental delay, epilepsy, and gastrostomy tube dependence. His chest x-ray is remarkable for multifocal opacities that are consistent with atelectasis. A complete blood count reveals a wbc count of 9.2 with a normal differential, Hg of 11.7, and platelet count of 276,000. A respiratory viral panel from a nasal swab returns positive for rhinovirus. Additional patient history from the parents uncovers that he has been hospitalized three times over the course of the past 2 years with a similar presentation.