Premature birth is a major risk factor for multiple brain pathologies, notably periventricular leukomalacia (PVL), which is distinguished by bilateral necrosis of neural tissue around the ventricles and a sequela of neurological disturbances. The 2 hallmarks of brain pathologies of prematurity are a restricted gestational window of vulnerability and confinement of injury to a specific cerebral region. Here, we examined the proposition that both of these features are determined by the state of blood vessel immaturity. We developed a murine genetic model that allows for inducible and reversible VEGF blockade during brain development. Using this system, we determined that cerebral vessels mature in a centrifugal, wave-like fashion that results in sequential acquisition of a functional blood-brain barrier and exit from a VEGF-dependent phase, with periventricular vessels being the last to mature. This developmental program permitted selective ablation of periventricular vessels via episodic VEGF blockade within a specific, vulnerable gestational window. Enforced collapse of ganglionic eminence vessels and resultant periventricular neural apoptosis resulted in a PVL-like phenotype that recapitulates the primary periventricular lesion, ventricular enlargement, and the secondary cortical deficit in out-migrating GABAergic inhibitory interneurons. These findings provide an animal model that reproduces the temporal and spatial specificities of PVL and indicate that damage to VEGF-dependent, immature periventricular vessels contributes to PVL development. 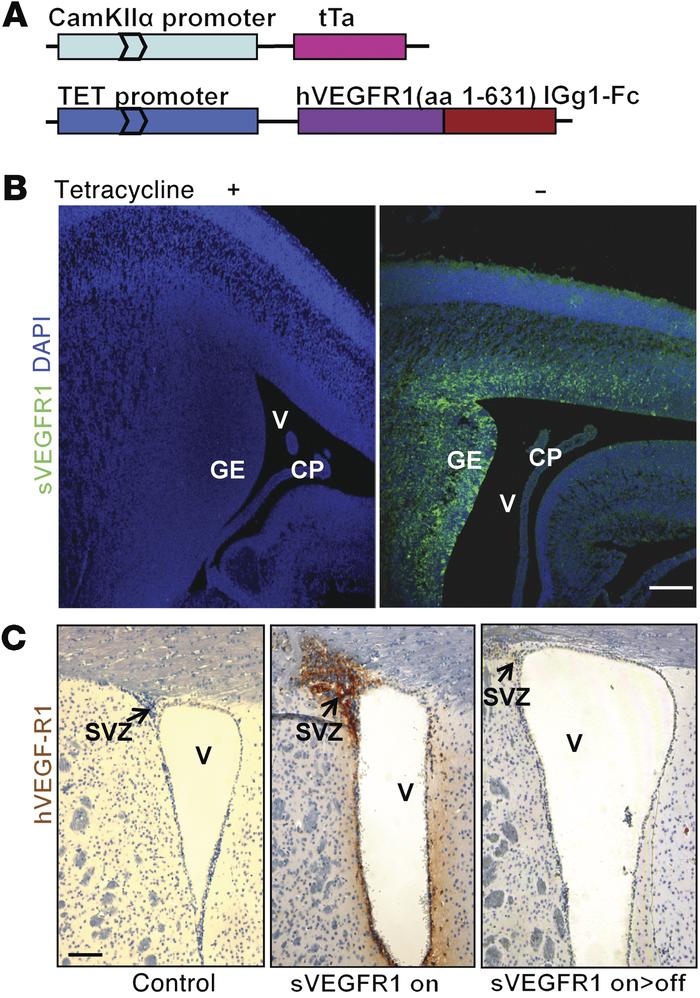