Hearing loss is a significant public health concern, affecting over 250 million people worldwide. Both genetic and environmental etiologies are linked to hearing loss, but in many cases the underlying cellular pathophysiology is not well understood, highlighting the importance of further discovery. We found that inactivation of the gene Tmtc4 (transmembrane and tetratricopeptide repeat 4), which was broadly expressed in the mouse cochlea, caused acquired hearing loss in mice. Our data showed Tmtc4 enriched in the endoplasmic reticulum, and that it functioned by regulating Ca2+ dynamics and the unfolded protein response (UPR). Given this genetic linkage of the UPR to hearing loss, we demonstrated a direct link between the more common noise-induced hearing loss (NIHL) and the UPR. These experiments suggested a novel approach to treatment. We demonstrated that the small-molecule UPR and stress response modulator ISRIB (integrated stress response inhibitor), which activates eIF2B, prevented NIHL in a mouse model. Moreover, in an inverse genetic complementation approach, we demonstrated that mice with homozygous inactivation of both Tmtc4 and Chop had less hearing loss than knockout of Tmtc4 alone. This study implicated a novel mechanism for hearing impairment, highlighting a potential treatment approach for a broad range of human hearing loss disorders.

TMTC4 enrichment in the ER and colocalization with ER markers. 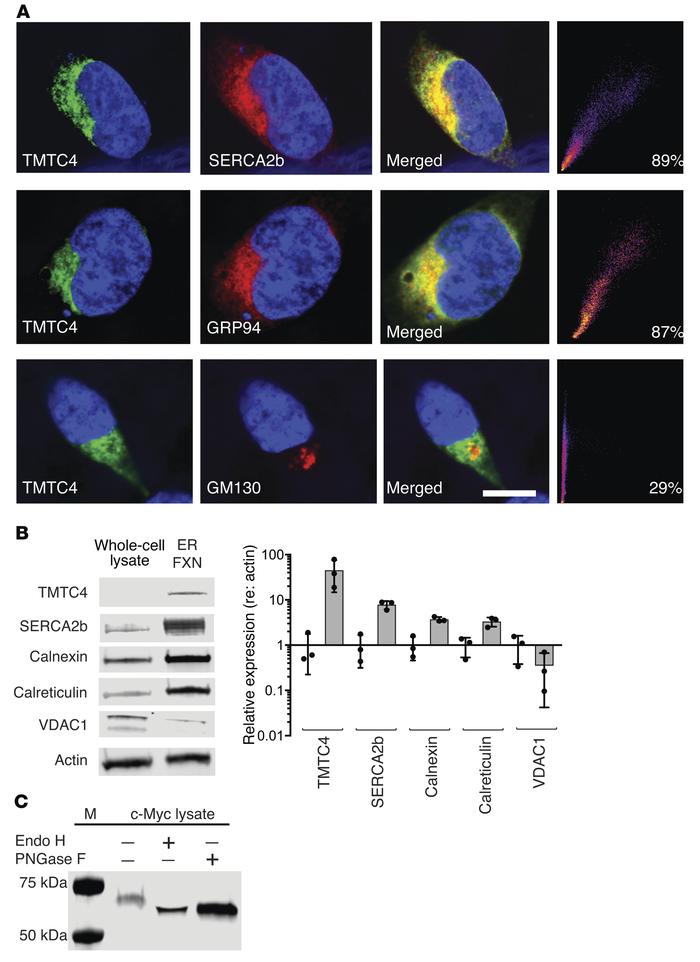 () HEK cells were stably transfected with TMTC4-c-myc constructs and stained with antibodies against TMTC4 (green, first column), ER proteins (GRP94 or SERCA2b), or the Golgi-enriched protein GM130 (red, second column), and DAPI to stain nuclei (blue, all panels). As demonstrated in the merged panels (third column), TMTC4 colocalizes with ER proteins but not with the Golgi protein (quantified in the fourth column). Images are representative of 5 experiments. Scale bar: 10 μm. () Nonnuclear whole-cell lysate (whole-cell lysate) from WT HEK cells, and a fraction enriched for ER membranes (ER Fxn), were stained with antibodies against TMTC4, as well as to the known ER resident proteins SERCA2b, calnexin, and calreticulin; all showed enrichment in the ER. As controls, actin was not enriched, and the mitochondrial membrane protein VDAC1 was barely detected, in the ER fraction. Quantification of expression levels (relative to actin, and normalized against the relative expression level in whole-cell lysate) confirm the ER localization of endogenous TMTC4 ( = 3 experiments, from which representative images were taken). () TMTC4-c-Myc and copurifying proteins were isolated from a postnuclear supernatant of HEK cells with stably incorporated TMTC4-c-Myc vector. This lysate (c-Myc lysate) was then treated with or without Endo H and/or PNGase F and the fractions assessed with antibody against c-Myc. The shift in molecular weight in TMTC4 treated with both Endo H and PNGase F indicates that TMTC4 is glycosylated, consistent with residence in the ER. M: molecular weight markers. Images are representative of 3 experiments.