Immune imbalance of T lymphocyte subsets is a hallmark of psoriasis, but the molecular mechanisms underlying this aspect of psoriasis pathology are poorly understood. Here, we report that microRNA-210 (miR-210), a miR that is highly expressed in both psoriasis patients and mouse models, induces helper T (Th) 17 and Th1 cell differentiation but inhibits Th2 differentiation through repressing STAT6 and LYN expression, contributing to several aspects of the immune imbalance in psoriasis. Both miR-210 ablation in mice and inhibition of miR-210 by intradermal injection of antagomir-210 blocked the immune imbalance and the development of psoriasis-like inflammation in an imiquimod-induced or IL-23–induced psoriasis-like mouse model. We further showed that TGF-β and IL-23 enhance miR-210 expression by inducing HIF-1α, which recruits P300 and promotes histone H3 acetylation in the miR-210 promoter region. Our results reveal a crucial role for miR-210 in the immune imbalance of T lymphocyte subsets in psoriasis and suggest a potential therapeutic avenue. 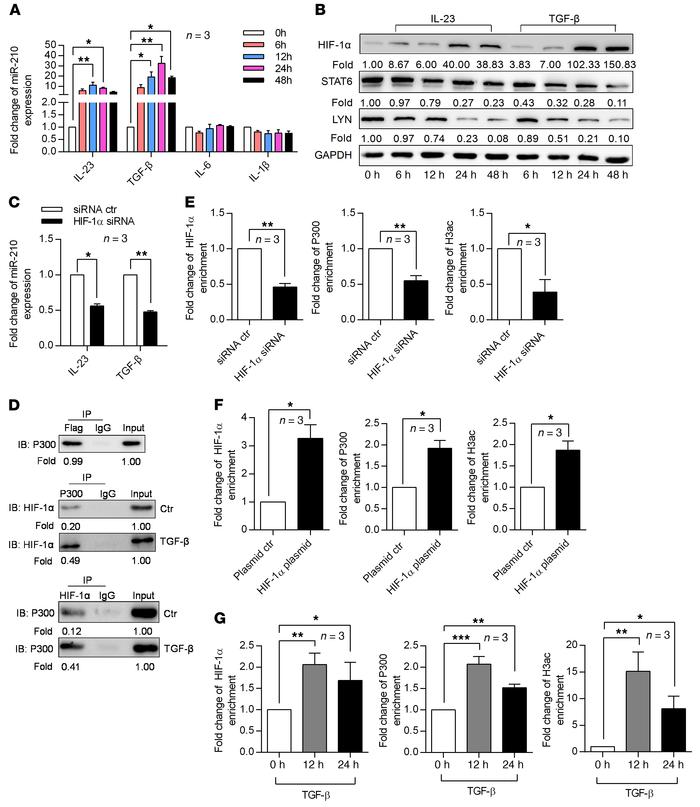