SHARPIN, an adaptor for the linear ubiquitin chain assembly complex (LUBAC), plays important roles in NF-κB signaling and inflammation. Here, we have demonstrated a LUBAC-independent role for SHARPIN in regulating melanoma growth. We observed that SHARPIN interacted with PRMT5, a type II protein arginine methyltransferase, and increased its multiprotein complex and methyltransferase activity. Activated PRMT5 controlled the expression of the transcription factors SOX10 and MITF by SHARPIN-dependent arginine dimethylation and inhibition of the transcriptional corepressor SKI. Activation of PRMT5 by SHARPIN counteracted PRMT5 inhibition by methylthioadenosine, a substrate of methylthioadenosine phosphorylase, which is codeleted with cyclin-dependent kinase inhibitor 2A (CDKN2A) in approximately 15% of human cancers. Collectively, we identified a LUBAC-independent role for SHARPIN in enhancing PRMT5 activity that contributes to melanomagenesis through the SKI/SOX10 regulatory axis.

SHARPIN is upregulated in melanoma. 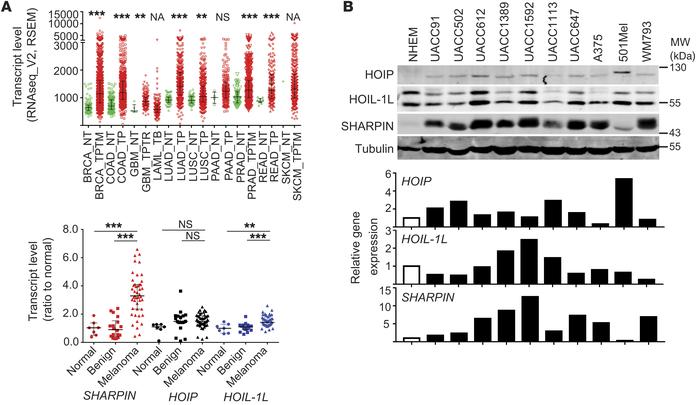