Activation of non-neuronal microglia is thought to play a causal role in spinal processing of neuropathic pain. To specifically investigate microglia-mediated effects in a model of neuropathic pain and overcome the methodological limitations of previous approaches exploring microglia function upon nerve injury, we selectively ablated resident microglia by intracerebroventricular ganciclovir infusion into male CD11b-HSVTK–transgenic mice, which was followed by a rapid, complete, and persistent (23 weeks) repopulation of the CNS by peripheral myeloid cells. In repopulated mice that underwent sciatic nerve injury, we observed a normal response to mechanical stimuli, but an absence of thermal hypersensitivity ipsilateral to the injured nerve. Furthermore, we found that neuronal expression of calcitonin gene–related peptide (CGRP), which is a marker of neurons essential for heat responses, was diminished in the dorsal horn of the spinal cord in repopulated mice. These findings identify distinct mechanisms for heat and mechanical hypersensitivity and highlight a crucial contribution of CNS myeloid cells in the facilitation of noxious heat. 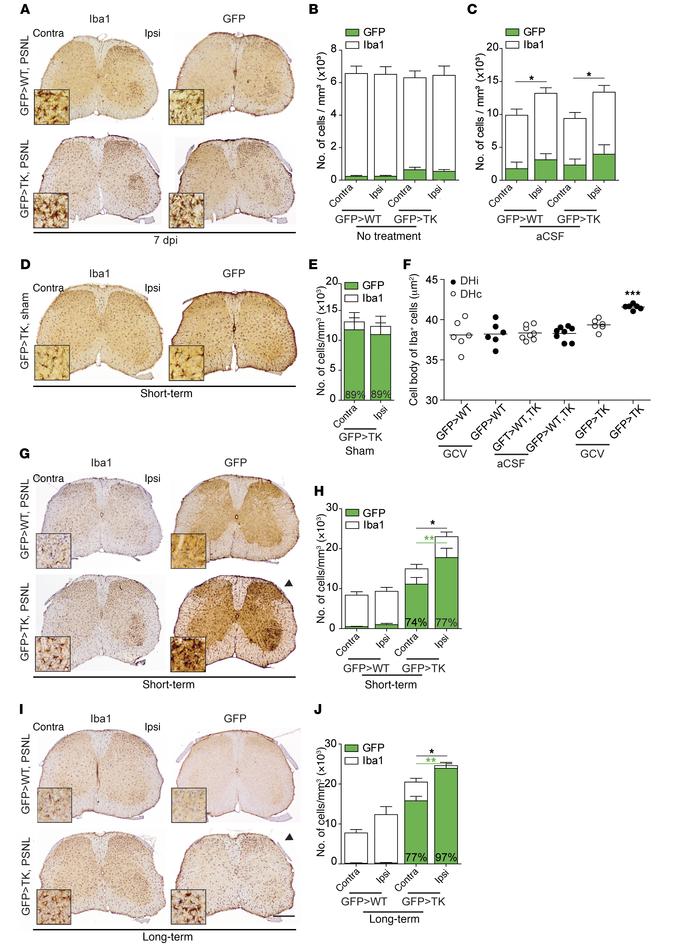 () A marked increase in Iba1 and GFP-IR in the lumbar spinal cord in GFP>WT and GFP>TK animals was observed in the DHi and VHi at 7 dpi. () Stereological analysis of Iba1+ and GFP+ cells in the DHi (Ipsi) or DHc (Contra) revealed no difference in the number of Iba1+ or GFP+ cells in nontreated GFP>WT ( = 6) and GFP>TK ( = 4) mice. () aCSF-treated GFP>WT ( = 7) and GFP>TK ( = 8) mice showed only moderate infiltration of peripheral myeloid cells, but a significantly higher number of Iba1+ cells within the DHi at 50 dpi, suggesting long-term survival of microglia that proliferated early after PSNL. ( and ) At 50 dpi, 89% of the cells in both the DHi and DHc were repopulated cells in sham-operated GFP>TK ( = 5) mice. () Infiltrating myeloid cells in the DHi of GCV-treated GFP>TK mice had significantly larger cell bodies (combined short-term and long-term repopulation groups). () Lumbar spinal cord sections at 50 dpi revealed increased numbers of GFP+ myeloid cells in GFP>TK animals only. Peripheral GFP+ cells still showed morphological signs of activation in the DHi (arrowhead), which was not observed in GFP>WT animals. () Stereological analysis of the lumbar spinal cord sections shown in revealed a significantly higher number of GFP+ engrafted myeloid cells in the DHi in repopulated GFP>TK mice ( = 8), but not in their GFP>WT littermates ( = 9). ( and ) A significantly higher number of GFP+ engrafted myeloid cells was observed in the DHi of long-term repopulated mice ( = 5/genotype). Scale bar: 500 μm. Inset images (original magnification, ×40) are of the DHi. Error bars indicate the SEM. * < 0.05, ** < 0.01, and *** < 0.001, by paired, 2-tailed Student’s test for corresponding DHc and DHi pairs, except for the data in , for which a 1-way ANOVA with Bonferroni’s post hoc analysis was used. Green double-asterisks in and indicate the difference between the GFP+ cells.