V617F driver mutation of JAK2 is the leading cause of the Philadelphia-chromosome-negative myeloproliferative neoplasms (MPNs). Although thrombosis is a leading cause of mortality and morbidity in MPNs, the mechanisms underlying their pathogenesis are unclear. Here, we identified pleckstrin-2 (Plek2) as a downstream target of the JAK2/STAT5 pathway in erythroid and myeloid cells, and showed that it is upregulated in a JAK2V617F-positive MPN mouse model and in patients with MPNs. Loss of Plek2 ameliorated JAK2V617F-induced myeloproliferative phenotypes including erythrocytosis, neutrophilia, thrombocytosis, and splenomegaly, thereby reverting the widespread vascular occlusions and lethality in JAK2V617F-knockin mice. Additionally, we demonstrated that a reduction in red blood cell mass was the main contributing factor in the reversion of vascular occlusions. Thus, our study identifies Plek2 as an effector of the JAK2/STAT5 pathway and a key factor in the pathogenesis of JAK2V617F-induced MPNs, pointing to Plek2 as a viable target for the treatment of MPNs.

Reduction in RBC mass leads to the amelioration of vascular occlusion with loss of Plek2. 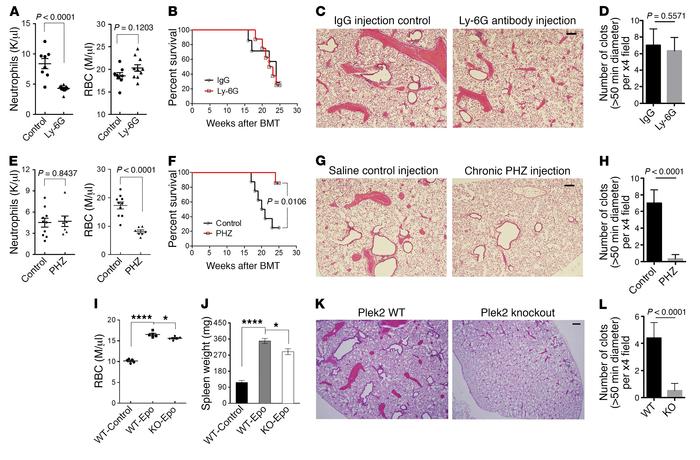