Deficiency in Krüppel-like zinc finger transcription factor GLI-similar 3 (GLIS3) in humans is associated with the development of congenital hypothyroidism. However, the functions of GLIS3 in the thyroid gland and the mechanism by which GLIS3 dysfunction causes hypothyroidism are unknown. In the current study, we demonstrate that GLIS3 acts downstream of thyroid-stimulating hormone (TSH) and TSH receptor (TSHR) and is indispensable for TSH/TSHR-mediated proliferation of thyroid follicular cells and biosynthesis of thyroid hormone. Using ChIP-Seq and promoter analysis, we demonstrate that GLIS3 is critical for the transcriptional activation of several genes required for thyroid hormone biosynthesis, including the iodide transporters Nis and Pds, both of which showed enhanced GLIS3 binding at their promoters. The repression of cell proliferation of GLIS3-deficient thyroid follicular cells was due to the inhibition of TSH-mediated activation of the mTOR complex 1/ribosomal protein S6 (mTORC1/RPS6) pathway as well as the reduced expression of several cell division–related genes regulated directly by GLIS3. Consequently, GLIS3 deficiency in a murine model prevented the development of goiter as well as the induction of inflammatory and fibrotic genes during chronic elevation of circulating TSH. Our study identifies GLIS3 as a key regulator of TSH/TSHR-mediated thyroid hormone biosynthesis and proliferation of thyroid follicular cells and uncovers a mechanism by which GLIS3 deficiency causes neonatal hypothyroidism and prevents goiter development. 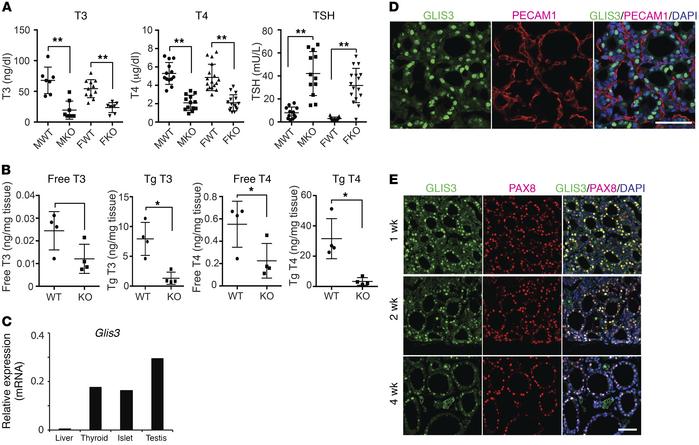 () Comparison of serum T3, T4, and TSH levels between 1-month-old male and female WT (MWT and FWT, respectively) and Glis3KO (MKO and FKO, respectively) mice ( = 7–16). () The content of free T3, free T4, and thyroglobulin-bound T3 and T4 (Tg T3 and Tg T4, respectively) were analyzed in thyroid tissues from 1-month-old male and female WT and Glis3KO mice ( = 4). The content of hormones was normalized to tissue weight. Data are shown as mean ± SEM. () is highly expressed in the thyroid. Levels of mRNA in the liver, thyroid gland, pancreatic islets, and P7 testis were analyzed by QRT-PCR. Levels of expression were examined in tissues from at least 2 different mice. () Sections of thyroids from 1-week-old Glis3-EGFP mice were examined by immunohistochemistry with anti-GFP and anti-PECAM1 antibodies as described in Methods. Scale bar: 50 μm. () Thyroid tissues from 1-, 2-, and 4-week-old -EGFP mice were examined with antibodies against GFP and PAX8. Scale bar: 50 μm. * < 0.05; ** < 0.001, Student’s test..